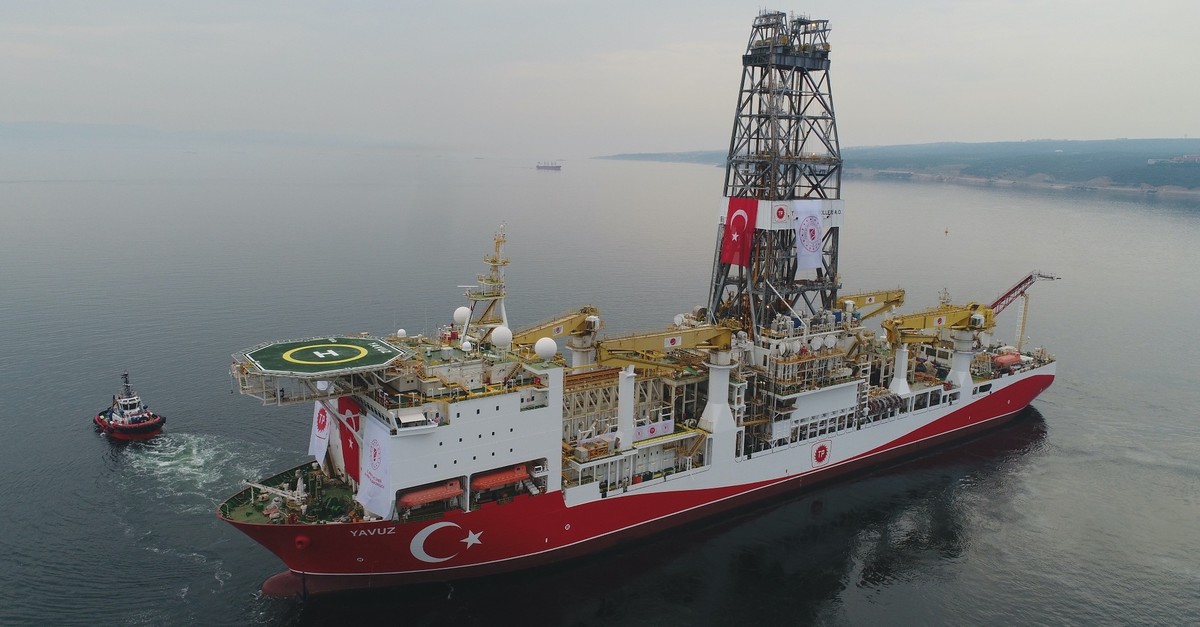 The return of the drillship Yavuz to Eastern Mediterranean is a strong indication of Turkeyu2019s commitment to protect the rights and interests of the Turkish state and the Turkish Cypriots.
by Daily Sabah Oct 07, 2019 12:29 am

The Yavuz drilling vessel has reached the Güzelyurt-1 well location in the Mediterranean Sea to continue oil and gas exploration activities, Energy and Natural Resources Minister Fatih Dönmez announced Saturday. The vessel will begin drilling today. "Our Yavuz drilling vessel has arrived at Guzelyurt-1 location," Dönmez wrote on his Twitter account. "Our ship, which has begun location anchorage activities, will start drilling as soon as possible after completing all of its preparations," he added. According to an issued Navtex, or navigational telex, the Yavuz drilling vessel will continue to work in the Mediterranean until January 2020. In an address at the ruling Justice and Development Party's (AK Party) camp in Ankara, President Recep Tayyip Erdoğan also referred to the other oil and gas exploration activities by Turkish vessels.

A second drilling vessel, the Fatih, continues its operations in the region, the MTA Oruç Reis and the Barbaros Hayreddin Paşa seismic research ships conducted seismic surveys in the Black Sea and Marmara Sea in the past. "We now have two seismic research ships and two drilling vessels. There could be a third drilling ship that we can add to that, so we won't have any trouble to rent it from elsewhere," Erdoğan said.

The president noted that Fatih vessel has drilled below 4,000 meters, while MTA Oruç Reis has completed 30% of its seismic survey off the coast of Antalya in southern Turkey.

The return of the drillship Yavuz to Eastern Mediterranean is a strong indication of Turkey's commitment to protect its rights and interests in the region without allowing the usurpation of sovereign rights of Turkish people and Turkish Cypriots in its own continental shelf.

The drilling area of Yavuz, Güzelyurt-1, falls within the limits of the Turkish continental shelf. However, the Greek Cypriot administration in the south of the island of Cyprus unilaterally declared the area as Block 7, included in its illegally declared exclusive economic zone.

In pure disregard of the rights of the Turkish Cypriots living on the northern part of the island, the Greek Cypriot administration signed agreements with French Total and Italian ENI for the offshore hydrocarbon exploration within Block 7. The deal made the French and Italian companies the biggest players in natural resource exploration on the island. ENI and Total have teamed up to expand their oil and gas search off Cyprus and currently hold licenses for seven of Cyprus' 13 blocks inside the island's economic zone.

The French Foreign Ministry issued a statement on Thursday and expressed full solidarity with the Greek Cypriot administration against the Turkish operations in the region. "The arrival of a new Turkish drilling ship in the Cypriot Exclusive Economic Zone (EEZ) is a violation of the sovereignty of the Republic of Cyprus and international law, the deputy spokesperson of the Ministry for Europe and Foreign Affairs of France said."

The Turkish Republic of Northern Cypress (TRNC) was established in 1983 on the northern one-third of the island, and is only recognized by Turkey and faces a longstanding embargo in commerce, transportation and culture. The Greek Cypriot administration enjoys recognition by the international community as the Republic of Cyprus, established in 1960, and acceded into the European Union on May 1, 2004, only days after the April 24 referendum to end the breakaway and isolation of Turkish Cyprus – which was rejected by 76% of Greek Cypriot voters and accepted by 65% of Turkish Cypriot voters.