Turkey to defy any act of energy piracy in Eastern Med, minister says 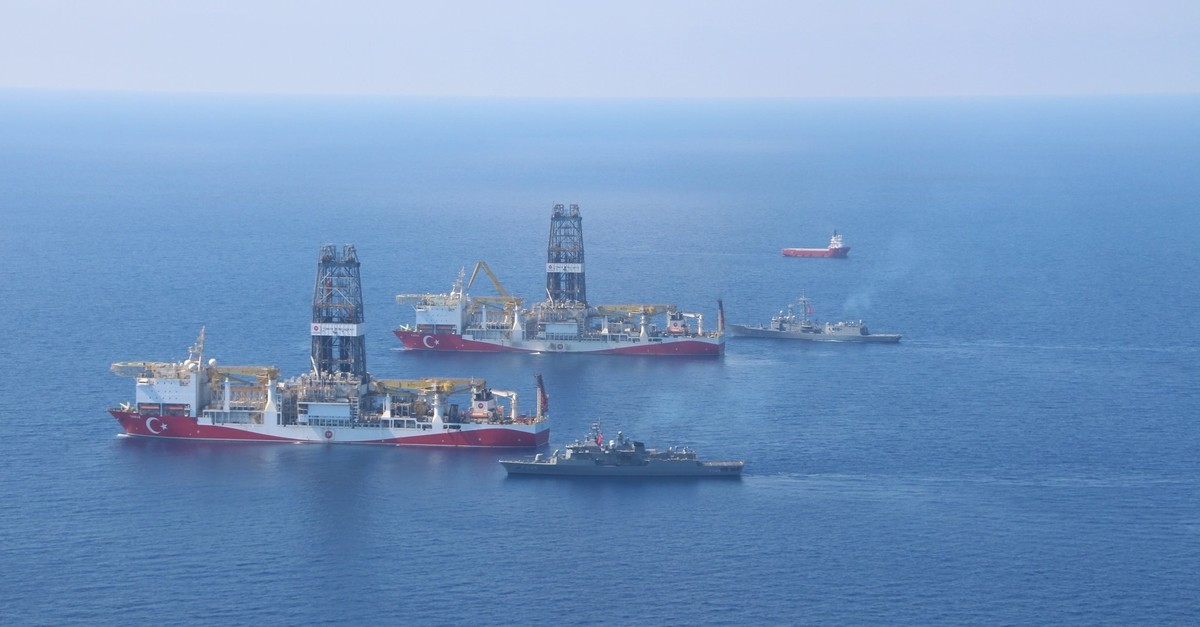 Turkeyu2019s twin drilling vessels Yavuz and Fatih are accompanied by military frigates and seismic survey vessel Oruu00e7 Reis in their hydrocarbon exploration in the Eastern Mediterranean.
by Daily Sabah with AA Oct 08, 2019 12:45 am

Ankara has been taking steps to demonstrate its resoluteness to protect its sovereign rights and interests in the Eastern Mediterranean by accelerating efforts for hydrocarbon exploration activities with twin drilling vessels. The drilling vessel Yavuz will carry out new oil and gas drilling in the Mediterranean very soon, Energy and Natural Resources Minister Fatih Dönmez said yesterday during an address at the 10th Turkey Energy Summit held in Antalya. The vessel arrived in the location known as Güzelyurt-1 on Saturday in preparation for the latest round of drilling. Turkey remains resolute in its defense of the rights of the Turkish Republic of Northern Cyprus (TRNC) and Turkish Cypriots to acquire resources around the island, the rights of which the United Nations is aware of, he said.

"We won't give way to any act of energy piracy in the Eastern Mediterranean," Dönmez said, referring to the Greek Cypriot's unilateral drilling activities off the island, adding that Turkey will rightfully take its place and conduct activities sanctioned under international law.

This exploration is a project of self-sufficiency for Turkey, which has equipped the drillships in the Eastern Mediterranean with local technology and Turkish engineers. This self-sufficiency also extends to the country's other gas projects.

Turkish Cypriot Energy and Economy Minister Hasan Taçoy also said yesterday the TRNC remains steadfast in defending its rights to resources in the region, which he said should not be ignored.

Taçoy explained that the Greek Cypriot administration, despite all warnings, is continuing to issue exploration licenses to international companies in blocks in the East Mediterranean that the TRNC also has rights to.

"The latest example of this is when they [Greek Cypriots] issued licenses for the seventh block," Taçoy said, referring to the block area that the Greek Cypriots independently designated.

Following this decision, he said the TRNC issued warnings to avoid such activity that only heightened tensions, and cautioned that the island does not solely belong to them.

Following the agreements, the Turkish Foreign Ministry slammed the decision saying that, "As repeatedly underlined and shared with the international community, a section of the so-called License Area Number 7 remains within the Turkish continental shelf, which has been registered with the United Nations."

Tacoy said, "Despite knowing that they cannot take a step without homeland Turkey, they both neglected the rights of Israel, Greece... and also defied Turkey." However, according to Tacoy, the necessary steps have been taken against this agitation and deadlock policy.

Greek Cyprus unilaterally declared a total of 13 so-called parcels in the Eastern Mediterranean as its Exclusive Economic Zone (EEZ) and allowed international oil and drilling companies to operate in these areas, which are anticipated to hold rich hydrocarbon reserves.

Prior to its second mission, the Yavuz vessel carried out operations at the Karpaz-1 well in the Bay of Famagusta, also known as Famagusta, in the TRNC.

Turkey, as a guarantor nation to the TRNC and in support of its rights to East Mediterranean resources, is currently conducting hydrocarbon exploration with its drilling vessels, Fatih and Yavuz along with the country's two other seismic vessels.