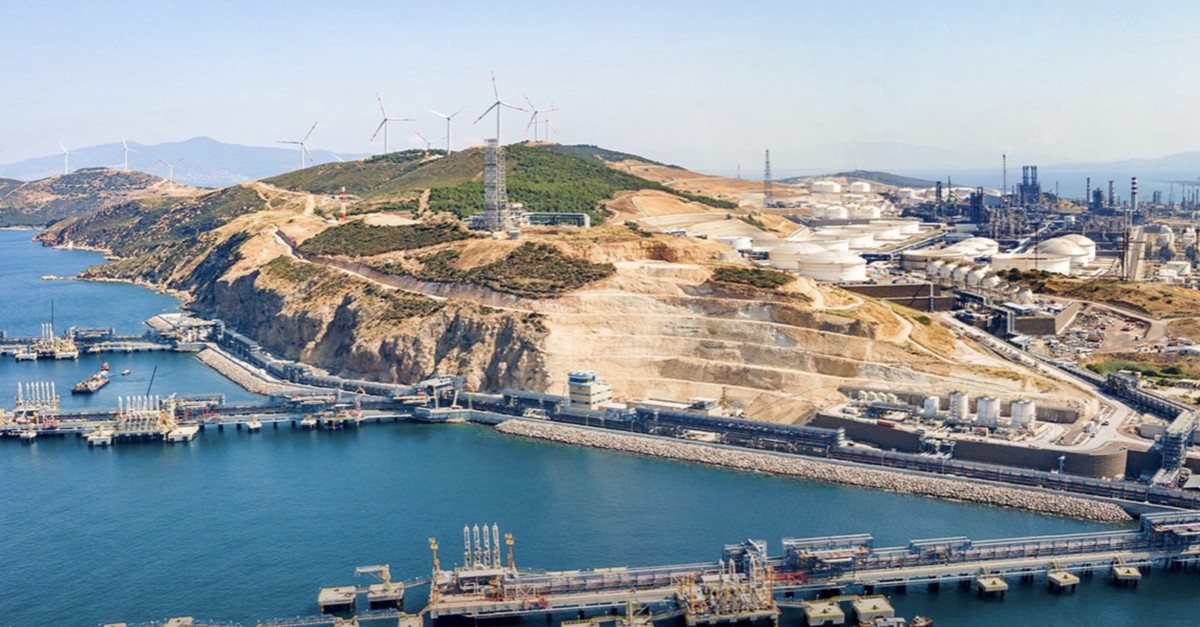 STAR Refinery, which became operational this February, has so far processed 5.5 million tons of crude oil and aims to reach 8 million tons by the end of this year.
by Daily Sabah with AA Oct 11, 2019 12:24 am

Turkey's largest private sector investor SOCAR is planning to expand the storage capacity at the STAR refinery while construction for a second refinery, in partnership with BP, is scheduled to start next year

The largest private sector investor in Turkey, the State Oil Company of Azerbaijan Republic's (SOCAR) latest refinery investment in Aegean province İzmir has been operating on full capacity since August, the facility's general manager said yesterday on the sidelines of 10th Turkey Energy Summit in Antalya.

STAR Refinery General Manager Mesut İlter explained that the company has so far processed 5.5 million tons of crude oil at the facility since its opening in October 2018 and aims to reach 8 million by the end of this year. The Star refinery located in the industrial district of Aliağa in the province of İzmir started production in February following the tests.

"Our white product efficiency is above 91.5% at the highest level of global standards," he said. Around 79% of this productivity comes from jet fuel, diesel and reformate while the refinery also produces LPG and naphtha.

The general manager of the STAR refinery confirmed that the current storage capacity of the refinery is 1.6 million cubic meters but the plan is to have a storage capacity of 2.5 million cubic meters by 2021. The first phase of the capacity addition with 350,000 cubic meters has been completed and will come online by the end of this month. While the first phase will store jet fuel, diesel and reformate products, the second phase of the project will be used for crude oil storage. The refinery processes crude oil from different countries has the capability to process low quality crude with high productivity. Therefore, he said, it is economically better for our models to process more affordable oil instead of high-priced crude. "During our performance tests, we brought in crude from Russia and for the last two months we are buying crude from the Middle East and Africa," he added, and also affirmed that they are using Iranian crude.

The Azerbaijani giant has so far realized around $14.2 billion out of its planned $19.5 billion investments in Turkey, to be

made by 2020. It began investing in Turkey after it acquired the country's leading petrochemical company Petkim in 2008 for $2 billion.

The total output of STAR is expected to decrease Turkey's current account deficit by $1.5 billion per year, by substituting refinery imports with domestic production. Turkey meets the majority of its oil and natural gas demand through expensive energy imports, which is the main expense of the country's budget.

İlter explained that they mainly supply their products to the domestic market, adding they will also export some of the production until SOCAR Turkey's second petrochemical investment is commissioned.

"Currently, feasibility studies of the second petrochemical investment have been completed, and basic engineering works are in progress. We anticipate an investment of $1.8 billion for this project. Our final product there is the starting material of the basic plastics we call purified terephthalic acid [PTA]," İlter continued. "Turkey is a major PTA importer. In Turkey, only Petkim produces PTA, but that is not enough. With this new investment, we will meet all the PTA needs of Turkey. Here, we aim to contribute significantly to the closure of the current account deficit. Petkim meets 20% of Turkey's petrochemical product needs. With this new investment, this level will reach 40%. Thus, we will reduce petrochemical imports."

İlter further stressed that there is market potential in petrochemicals in Turkey and that any investment that will reduce imports should be actualized. Underlining that SOCAR trusts in the Turkish economy, İlter added that despite the recent slowdown, economic growth will be visible once again.

BP and SOCAR are longstanding partners in a number of major oil and gas production and transportation projects in Turkey, Azerbaijan and the wider region, including the Shah Deniz 2 gas project in Azerbaijan that began production early last year, exporting natural gas to Turkey and beyond.

BP has been operating in Turkey for more than 100 years and is one of the largest investors in the country and the region. BP has significant fuels, lubricants and aviation businesses in Turkey, and is a shareholder and the operator of the Baku-Tbilisi-Ceyhan (BTC) oil pipeline and is the only multinational shareholder in the TANAP gas pipeline.