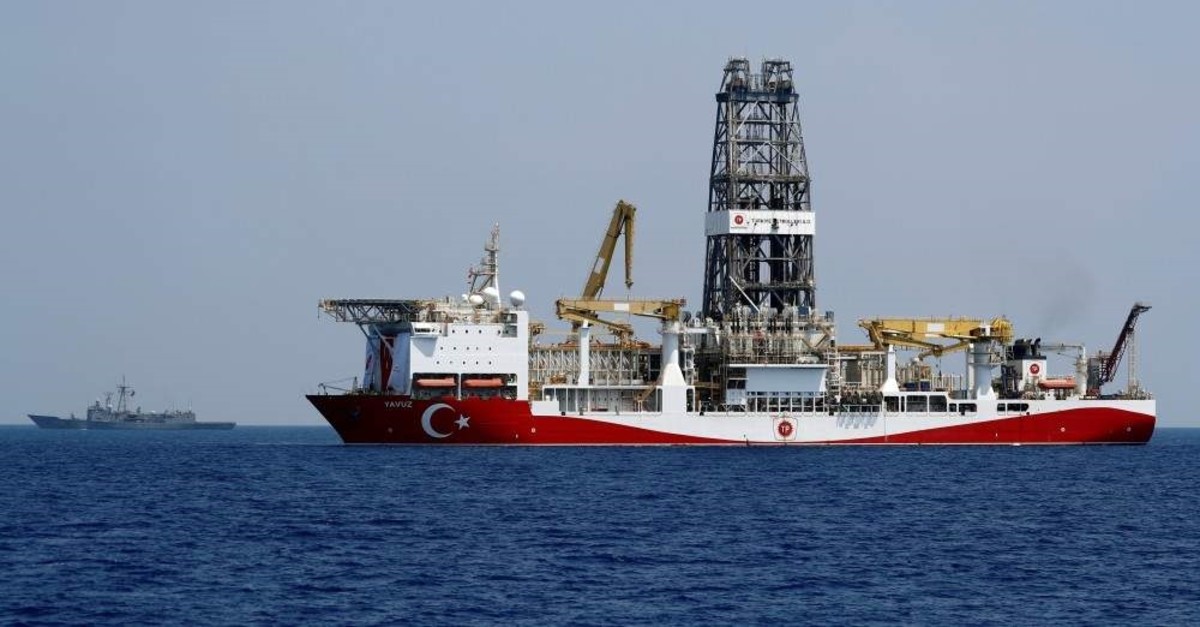 The Turkish drilling vessel Yavuz is escorted by Turkish Naval Forces frigate TCG Gemlik (F-492) in the Eastern Mediterranean. (Reuters Photo)
by Daily Sabah with AA
Nov 11, 2019 9:38 pm
The European Union Council adopted a framework for restrictive measures in response to Turkey's drilling activities in the Eastern Mediterranean, calling them "unauthorized," the council announced on Monday.
"The framework will make it possible to sanction individuals or entities responsible for or involved in unauthorized drilling activities of hydrocarbons in the Eastern Mediterranean," the statement read.
Turkey, as a guarantor nation for the Turkish Republic of Northern Cyprus (TRNC), is currently carrying out hydrocarbon exploration activities in the Eastern Mediterranean with two drilling vessels, Fatih and Yavuz, along with Oruç Reis and Barbaros Hayrettin Paşa seismic vessels in the same region.
Turkey has consistently contested the Greek Cypriot administration’s unilateral drilling in the Eastern Mediterranean, asserting that the TRNC also has rights to the resources in the area.
The sanctions will consist of a travel ban to the EU and an assets freeze for persons, and an assets freeze for entities, the council said, adding that EU persons and entities will be forbidden from making funds available to those listed.
Disregarding the rights of Turkish Cypriots living in the northern part of the island, the Greek Cypriot administration unilaterally declared exclusive economic zones and inked concession agreements with international energy companies for hydrocarbon exploration.
Turkey has persistently contested the Greek Cypriot administration's unilateral drilling in the Eastern Mediterranean, asserting that the TRNC also has rights to the resources in the area. The unilaterally declared exclusive economic zone (EEZ) of the Greek Cypriot administration violates part of Turkey's shelf, particularly in Blocks 1, 4, 5, 6 and 7.
For Block 7, the Greek Cypriot administration signed an agreement with Franco-Italian consortium Total and ENI. However, the two companies will not begin in the contested Block 7, Greek media reported last week.
In 1974, following a coup aiming at Cyprus's annexation by Greece, Ankara had to intervene as a guarantor power. In 1983, the TRNC was founded.
The decades since have seen several attempts to resolve the Cyprus dispute, all ending in failure. The latest one, held with the participation of the guarantor countries –Turkey, Greece, and the U.K. – came to an end without any progress in 2017 in Switzerland.
The TRNC was established in 1983 on the northern one-third of the island, is only recognized by Turkey and faces a longstanding embargo on commerce, transportation and culture. The Greek Cypriot administration enjoys recognition by the international community as the Republic of Cyprus, established in 1960, and acceded into the EU on May 1, 2004, only days after the April 24 referendum to end the breakaway and isolation of Turkish Cyprus – which was rejected by 76% of Greek Cypriot voters and accepted by 65% of Turkish Cypriot voters.
Last Update: Dec 20, 2019 1:37 am