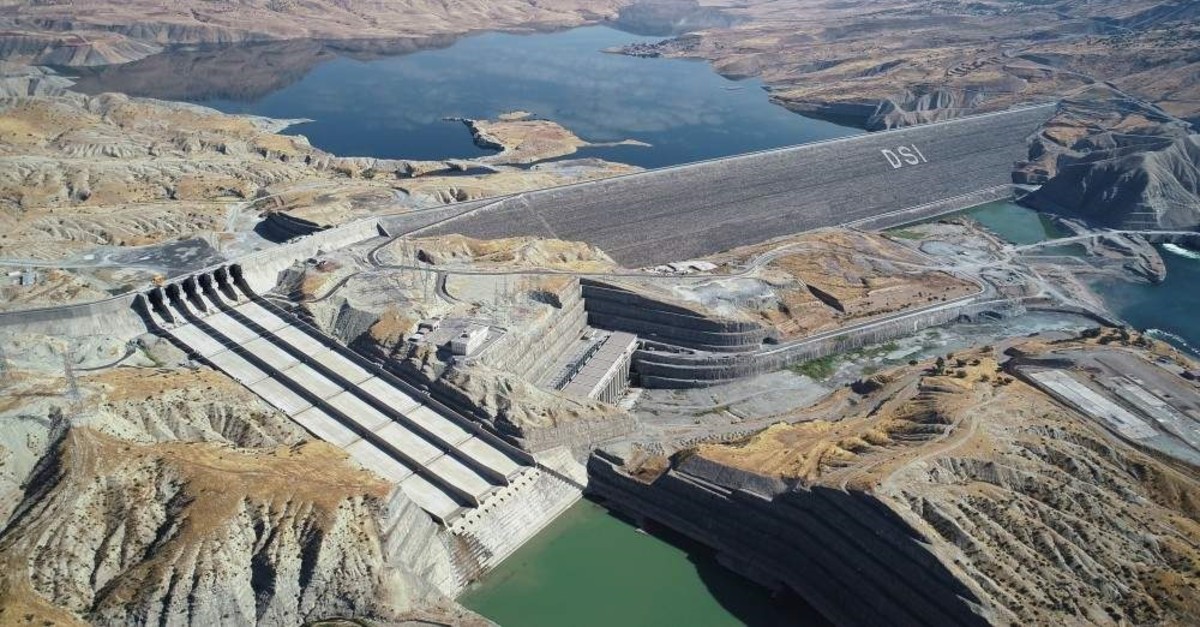 The Il?su Dam, built on the Tigris River, will start hydroelectric power generation in February 2020 and is expected to generate 4.1 billion kilowatt hour electrical power per year. (AA Photo)
by Daily Sabah with AA Nov 12, 2019 7:13 pm
One of Turkey’s visionary projects, the Ilısu Dam, has begun to fill water in its reservoir and its hydroelectric power plant is scheduled to begin electricity generation in three months.
Ilısu, a project carried out within the framework of the Southeast Anatolian Project (GAP) in order to boost development in the region, is the second-largest dam in Turkey after Atatürk Dam, whose reservoir has a capacity of 48 billion cubic meters (bcm) of water and was completed in 1992. It was designed to store water for large-scale irrigation as well as for the generation of hydropower.
The water filling operations at Ilısu started in August and the total amount of water reached 600 million cubic meters while the water level has surpassed 50 meters.
The dam is expected to generate 4.1 billion kilowatt-hour electricity per year, contributing TL 2 billion to the Turkish economy on an annual basis.
State Hydraulic Works 16th regional Director Ali Naci Kösali told Anadolu Agency (AA) Tuesday that the Ilısu Dam will also facilitate the construction of the Cizre Dam, another project planned as part of GAP. The Cizre Dam is a proposed dam on the Tigris River north of Cizre and it will be built downstream of the Ilısu Dam. Some 1.2 billion kilowatt-hour electrical power will be generated per year by Cizre Dam and hydroelectric power plant.
Six months from now, the Ilısu Dam reservoir will have 10.5 billion cubic meters of water, Kösali added. “We are expecting that the water will reach Hasankeyf toward the year’s end and we will begin power generation by operating turbines in February 2020,” he said.
The Ilısu Dam, built on the Tigris River in the southeastern province of Mardin, saw an estimated investment cost of TL 12 billion ($2.27 billion).
Turkey had started building dams on the Euphrates within the framework of a $32 billion GAP launched in 1977, one of the world's largest and most comprehensive sustainable development projects including efficient irrigation methods and a water infrastructure development scheme.
Turkey's largest three hydroelectric power plants - the Atatürk, Karakaya and Keban dams on the Euphrates River - have made a contribution of over TL 400 billion to the Turkish economy since their inaugurations in the 1980s.
Last Update: Dec 20, 2019 1:38 am
RELATED TOPICS