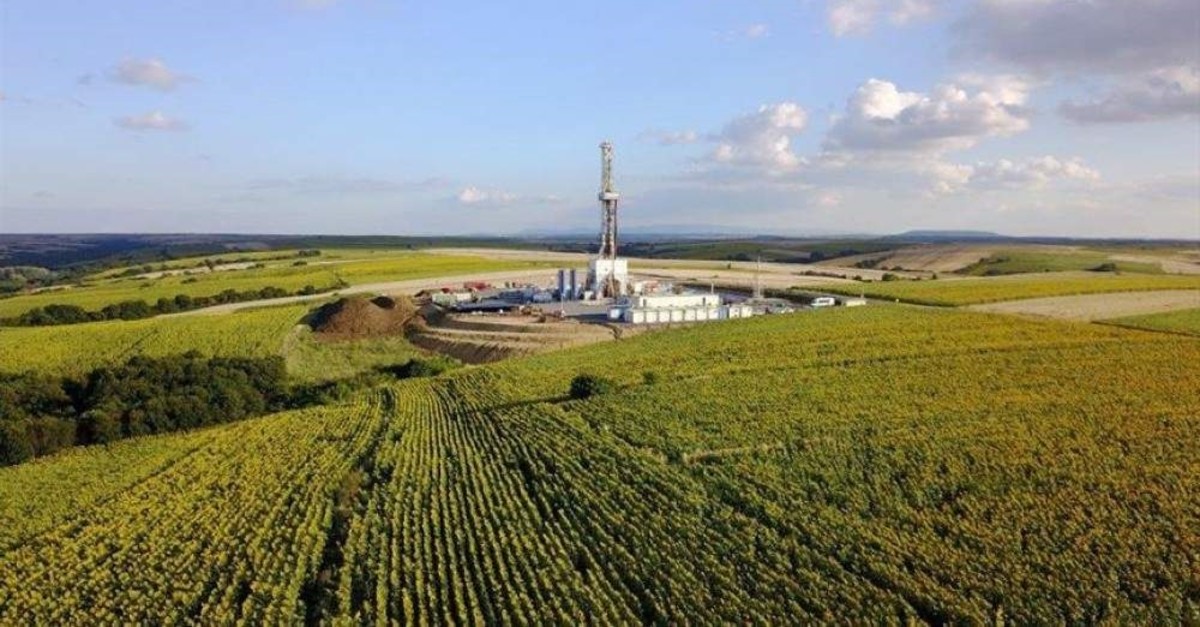 A view of the Yamalu0131k-1 well in the Banarlu0131 license.
by Anadolu Agency Nov 18, 2019 4:11 pm
Norwegian energy company Equinor's main focus in Turkey is the company's joint exploration program with Canada's Valeura in the Thrace region, according to Paul Piche, country manager of Equinor for Turkey.
Piche told Anadolu Agency (AA) Monday in an exclusive interview that this exploration came about from a joint venture made between Equinor, known as Statoil at that time, and Valeura on exploration in this unconventional gas play onshore in northwestern Turkey in May 2016.
He explained that Equinor further enhanced their presence in Turkey since the late 1990s by opening an office in Ankara in September 2018.
"Investments so far [over the last three years] have been limited to our share of the cost of the exploration program, which includes seismic and three wells," he said.
"Valeura and Equinor are the first companies to drill the deep formations of this area. The exploration-drilling program has proven hydrocarbons. However, uncertainty remains with regard to the extent of the play and potential commerciality. When the exploration program is finalized, Valeura and Equinor will evaluate the results from the drilling and testing of the exploration wells before concluding on the way forward," Piche said.
Piche described Equinor as "developing as a broad energy company, building a material position in renewable energy with an ambition to be a world leader in offshore wind."
The global energy company was founded as Statoil in 1972. Currently, it has a presence in over 35 countries and is a world leader in offshore oil and gas developments and operations.
Equinor's partner Canadian company Valeura said on Nov. 13 that its main focus during the third quarter of 2019 was on the stimulation and testing of the İnanli-1 well in Turkey’s Thrace Basin, as all four zones produced gas at stabilized rates.
According to Valeura, data from the İnanli-1 well is being analyzed in conjunction with petrophysical and core data acquired during drilling operations to further correlate results and continue refining the forward appraisal program.
Valeura said it is now focusing its attention on building an understanding of the lateral continuity of the play and accordingly has moved test equipment to the Devepınar-1 well, 20 kilometers to the west of İnanli-1.
It noted that stimulation and testing operations are underway, and the company will share flow results in due course. Equinor with 50%, Valeura with 31.5% and Pinnacle Turkey with 18.5% are funding this program.
In 2016, Equinor farmed into an onshore acreage operated by Valeura Energy. The Norwegian firm holds a 50% interest in formations deeper than 2,500 meters within the Banarlı and West Thrace licenses. Valeura holds 50% in the deep formations in the Banarlı license and 31.5% in the deep formations in the West Thrace. The remaining 18.5% in West Thrace is held by Pinnacle Turkey. The first deep exploration well, Yamalık-1 in the Banarlı license, was drilled in 2017 and proved a gas and condensate discovery.
Last Update: Dec 20, 2019 1:45 am
RELATED TOPICS