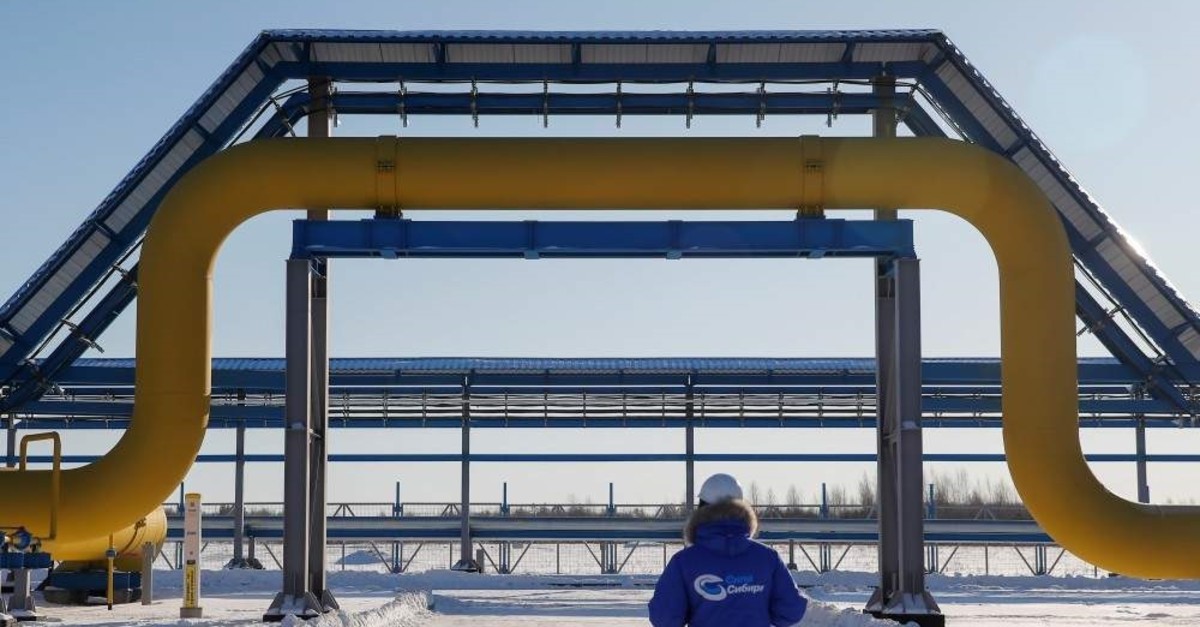 An employee in branded jacket walks past a part of Gazprom's Power Of Siberia gas pipeline at the Atamanskaya compressor station outside the far eastern town of Svobodny, Amur region, Russia, Nov. 29, 2019. (Reuters Photo)
by Dec 02, 2019 1:35 pm
Russian President Vladimir Putin and his Chinese counterpart Xi Jinping on Monday oversaw the launch of a landmark pipeline that will transport natural gas from Siberia to northeast China, an economic and political boost to ties between Moscow and Beijing.
The start of gas flows via the Power of Siberia pipeline reflects Moscow's attempts to pivot to the East to try to mitigate pain from Western financial sanctions imposed over its 2014 annexation of Ukraine's Crimea.
The move cements China's spot as Russia's top export market and gives Russia a potentially enormous new market outside Europe. It also comes as Moscow is hoping to launch two other major energy projects — the Nord Steam 2 undersea Baltic gas pipeline to Germany and the TurkStream pipeline to Turkey and southern Europe.
The 3,000-km-long (1,865 mile) Power of Siberia pipeline will transport gas from the Chayandinskoye and Kovytka fields in eastern Siberia, a project expected to last for three decades and to generate $400 billion for Russian state coffers.
"This is a genuinely historical event not only for the global energy market but above all for us, for Russia and China," said Putin, who watched the launch via video link from the Russian Black Sea resort of Sochi.
"This step takes Russo-Chinese strategic cooperation in energy to a qualitative new level and brings us closer to (fulfilling) the task, set together with Chinese leader Xi Jinping, of taking bilateral trade to $200 billion by 2024."
The new pipeline emerges in Heilongjiang, which borders Russia, and goes onto Jilin and Liaoning, China's top grain hub.
Xi told Putin via a video link Monday that the newly launched gas pipeline is "a landmark project of bilateral energy cooperation" and an "example of deep integration and mutually beneficial cooperation."
Flows via the pipeline are expected to gradually rise to 38 billion cubic meters (bcm) per year in 2025, possibly making China Russia's second-largest gas customer after Germany, which bought 58.50 bcm of gas from Russia last year.
Moscow began supplying natural gas to western and central Europe in the 1950s and Europe has long been Russia's major consumer of gas, supplied by Kremlin-controlled energy giant Gazprom, with total annual supplies of around 200 bcm.
The price China is paying for Russian gas in the new pipeline remains a closely kept secret with various industry sources saying it is tied to the price of an oil products basket.
Neither Putin, nor Xi commented on Monday on the gas price Beijing is set to pay under the contract.
Increased competition
Russian pipeline gas will compete against other pipeline gas supplies to China, including from Turkmenistan, as well as against shipments of sea-borne liquefied natural gas (LNG).
"China's gas demand growth is expected to slow down from previous years yet remains strong, with an estimated 10% year-on-year growth for the first nine months of 2019," Jean-Baptiste Dubreuil, from the International Energy Agency's natural gas market analysis team, told Reuters.
"Our medium term forecast 'Gas 2019' assumes average 8% growth until 2024 (compared with a world average of 1.6% pa)."
Russia has been in talks with China about raising gas sales via other routes too, such as from the Russian Far East and via Mongolia or Kazakhstan, but has not yet clinched any deals.
Russia has dramatically increased deliveries of oil to China in the past decade, challenging Saudi Arabia as China's top oil supplier in certain months.
To achieve that, Russia launched a major oil pipeline to China, which today ships 600,000 barrels per day (bpd), and opened a new port at Kozmino on the Pacific. Russia also ships 200,000 bpd to China via a pipeline crossing Kazakhstan.
Russian coal sales to the east in 2018 exceeded 100 million tonnes, accounting for more than half of Russia's total coal exports.