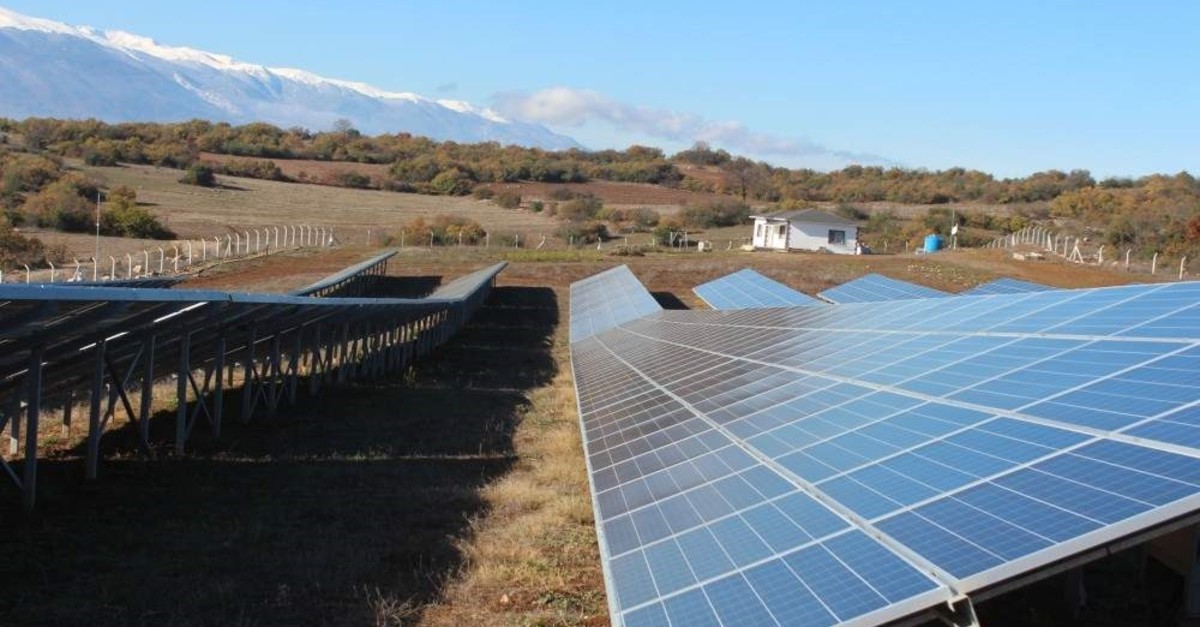 Turkey is expected to add 10 GW of solar capacity by 2024, out of which 3.7 GW will come from distributed systems, according to the International Energy Agency. (AA Photo)
by Daily Sabah Dec 05, 2019 9:12 pm

Turkey is expected to register 50% growth in renewable capacity over the next five years, according to an IEA report. A significant part of this boost will come from solar and wind power as opposed to the trend in the last decade, which saw a rapid rise in hydropower

Turkey's renewable energy capacity is expected to increase by 50% from its current 42 gigawatts (GW) to 63 GW by 2024, according to the International Energy Agency's (IEA) Renewables 2019 report.
The surge in capacity will place Turkey among Europe's top five and 11th worldwide in terms of renewable capacity, the report added.

The country has enjoyed a remarkable momentum in the expansion of installed renewable energy capacity in the last two decades, driven mostly by hydroelectric power plants. However, the next five years will be marked by solar and power capacity expansion, the report said.

Turkey currently has a total of 28,2358 megawatts (MW) in hydroelectric power capacity while its solar and wind power capacity has crossed 7,600 MW and 5,400 MW, respectively.

According to the report, Turkey's hydropower will reach 31 GW by 2024 with an 11% growth rate.
Meanwhile, geothermal and bioenergy capacities will also reach 2.1 GW and 1.5 GW, respectively, by 2024. In total, Turkey will add almost 21 GW to its installed renewable energy capacity between 2019 and 2024.
The wind sector will mark the second-highest rise with 5.9 GW by 2024, taking Turkey's total installed wind capacity to 12.9 GW.

The IEA report added that since the Turkish government approved a framework for self-consumption and the remuneration of excess generation at retail rates for residential, commercial and industrial solar panel applications, solar photovoltaic (PV) will be one of the main drivers of the renewable growth in the next five years.

“Decreasing prices and improving public policies have been supporting the development of the renewable energy capacity in the world and Turkey,” IEA Senior Renewables Analyst Heymi Bahar said during his presentation at the Turkey launch of the report Wednesday.

While the IEA forecast expects limited hydropower growth after 2020, the solar power will account for a significant part of the 50% capacity increase in renewables. “Turkey’s renewable capacity could expand 31% more quickly if macroeconomic indicators improve, the new distributed PV regulation is implemented smoothly (leading to faster deployment), and more capacity is allocated under the Renewable Energy Resource Areas (YEKA),” the report said.
Distributed solar PV

Turkey is expected to add 10 GW of solar capacity by 2024 of which 3.7 GW will derive from distributed systems, namely rooftops. As a result, solar power generation is due to increase by 198% between 2019 and 2024, the IEA found.

“We are going to witness a transformation of the trends in energy generation and consumption,” Bahar said. He highlighted that the prices in the distributed solar PVs are not comparable with the spot market prices but with the retail electricity prices – which are usually higher.

“Our expectations put forward that solar power prices are very close to retail prices both in Turkey and most of the world. The solar power prices with the development of the PVs will see a further decline by around 15% to 35%. Those who invest in the solar PV particularly will see the drop in their electricity bills on the first day,” IEA Analyst Bahar said.

Speaking at the session titled the "Future of the Solar Power in Turkey and World," held following the report launch, the International Solar Energy Society's Turkey Section Chairman Kutay Kaleli also stressed that 2020 will see a great boom in the expansion of solar PVs in Turkey.
“Organized industrial zones and industrial enterprises are getting ready for the rooftop applications,” he said and added that “A very swift increase in the second half of the year will be observed in solar power capacity. We are expecting a 1,000 MW power installation in the solar field.”

Bahar stressed that the PV applications are more attractive for industrial and commercial enterprises given the lower prices compared to residential applications and the compliance of electricity demand with the distributed PV.
“Yet,” he warned, “new public policies and tariff forms should regulate the conflicts of interest among distributed solar PV owners, distribution companies running grids and electricity consumers because highly growing areas will be less reliant on grids.”
Is this growth enough for the climate?

Global renewable-based energy capacity is set to rise by 50% between 2019 and 2024, driven by solar PV installations in homes, buildings and across the industry, the IEA's Renewables 2019 report said.

The increase will amount to 1,200 GW – equivalent to the current total energy capacity of the U.S. – and be driven by cost reductions and what the IEA described as "concerted government policy efforts."

At the end of his presentation, Bahar stressed that the IEA sees more potential for growth across the globe to reach its carbon emission goals. “There are three problems for the rapid growth of renewable capacity, including grid integration, the uncertainty of public policies and the lack of low-cost financing,” Bahar explained. If countries can get over these obstacles in the next two years, the renewable capacity increase by 2024 could be 25% higher, he said.

Nations around the world are struggling to reduce carbon emissions to reach the 2 degrees Celsius goal set by the Paris Agreement, and they are far from complying with the emissions quotas.

The world's two largest economies, the U.S. and China, account for the highest emissions as they are responsible for more than 40% of the global emissions. Before the Industrial Revolution, levels of atmospheric carbon were around 280 parts per million (ppm). By 2013, that level had breached the 400ppm mark for the first time.

There are huge disparities between the world's top 15 carbon emissions generating countries. China creates almost double the emissions of the second-place U.S.
According to the European Commission’s Joint Research Center 2019 report on global carbon emissions, China accounts for 29.7% of global emissions and is followed by the U.S. with 13.9%. European Union member countries are responsible for 9.1% of the total global emission and India ranks fourth with 6.9%.