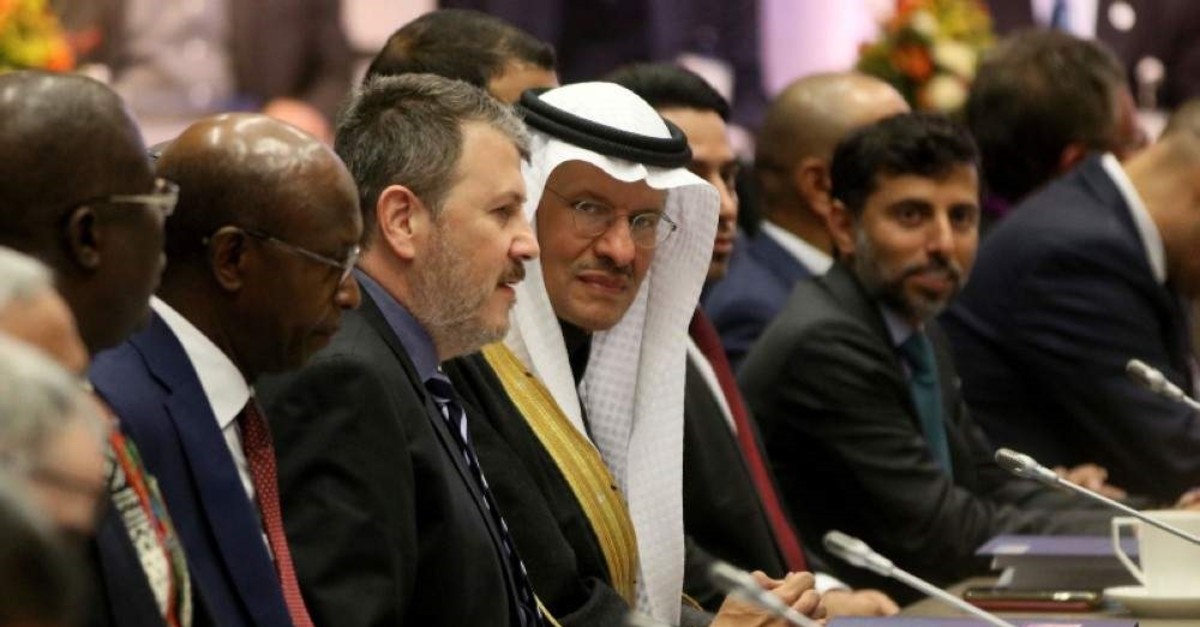 Saudi Prince Abdulaziz bin Salman Al Saud (C), the kingdom's minister of energy, at a meeting of the Organization of the Petroleum Exporting Countries (OPEC) in their headquarters in Vienna, Austria, Dec. 5, 2019. (AP Photo)
by Dec 09, 2019 3:57 pm

The powerful Organization of the Petroleum Exporting Countries (OPEC) and its allies reached a deal Friday to cut production by 500,000 barrels per day in a bid to stem prices, which have been under pressure from abundant reserves and weak global economic growth.

Friday's so-called OPEC+ meeting included Russia, the world's second-largest oil producer and not a member of the cartel.

It ended with a deal for a cut effective as of Jan. 1, which sets an output target of 1.7 million barrels per day, lower than October 2018 levels, with Saudi Arabia and Russia making almost half the additional reductions between them.

World oil prices surged in response, with U.S. benchmark WTI and its European counterpart Brent both rising 2% in an initial reaction before settling down at levels around 1.3% higher on the day in the late European afternoon.

On Thursday, a meeting of OPEC ministers ran late into the evening without a deal.

Saudi Oil Minister Prince Abdelaziz Bin Salman, who was at his first meeting in the post, said first-day talks lasting six hours saw delegations "laboring ... until 11 o'clock in the evening, squashing their heads, squeezing their brains" in search of an agreement.

Iraqi Oil Minister Thamer Ghadban told reporters Friday "what will happen during the first quarter (of 2020) will be assessed during an extraordinary meeting" of the OPEC and its partners in early March.

He held out the prospect that the cuts could even be extended until the end of 2020 but that it was "too early to say now."

Earlier, Prince Abdulaziz hinted at Saudi irritation that not all countries have been sticking to the production quotas agreed on under the current deal.

While Saudi Arabia has voluntarily pumped below its quota other producers – including Russia, Iraq and Nigeria – had been exceeding theirs.

"Like religion, if you are a believer you have to practice, without practice, you are a nonbeliever," Prince Abdulaziz said, stressing the importance of "further conformity" if the OPEC is to achieve its goals.

Analyst David Madden at CMC Markets said, "The usual infighting of OPEC continues, as the Saudis call for greater compliance with the group target, while the likes of Iraq have been overproducing."

According to Caroline Bain at Capital Economics, "The key uncertainty facing the oil market now is OPEC+ supply from April."

She added that due to a subdued outlook for global growth, "Our best guess is that the cuts will be extended for the remainder of the year."

Saudi Arabia, in particular, has an interest in underpinning crude prices in the wake of its initial public offer (IPO) of shares in state-owned oil giant Aramco.

The group, which alone accounts for around 10% of the world's crude oil, said Thursday it had raised $25.6 billion in the world's biggest stock sale ever.

The IPO puts Aramco's total value at $1.7 trillion, well ahead of Apple.

Despite the glitzy headlines, OPEC remains under pressure from factors that include a trade war that has curbed the oil-thirsty Chinese economy and weak activity across Europe.

Meanwhile, oil production in the United States, which became the world's biggest producer in 2018, Brazil and Canada are at record levels, and Norway plans to increase its production as well.

For the second day in a row, the meeting was accompanied by a protest from climate change activists on Friday.

Around a hundred people marched to OPEC's headquarters with banners demanding "Keep it in the ground" and representations of humanity and nature standing on blocks of ice in mock gallows.