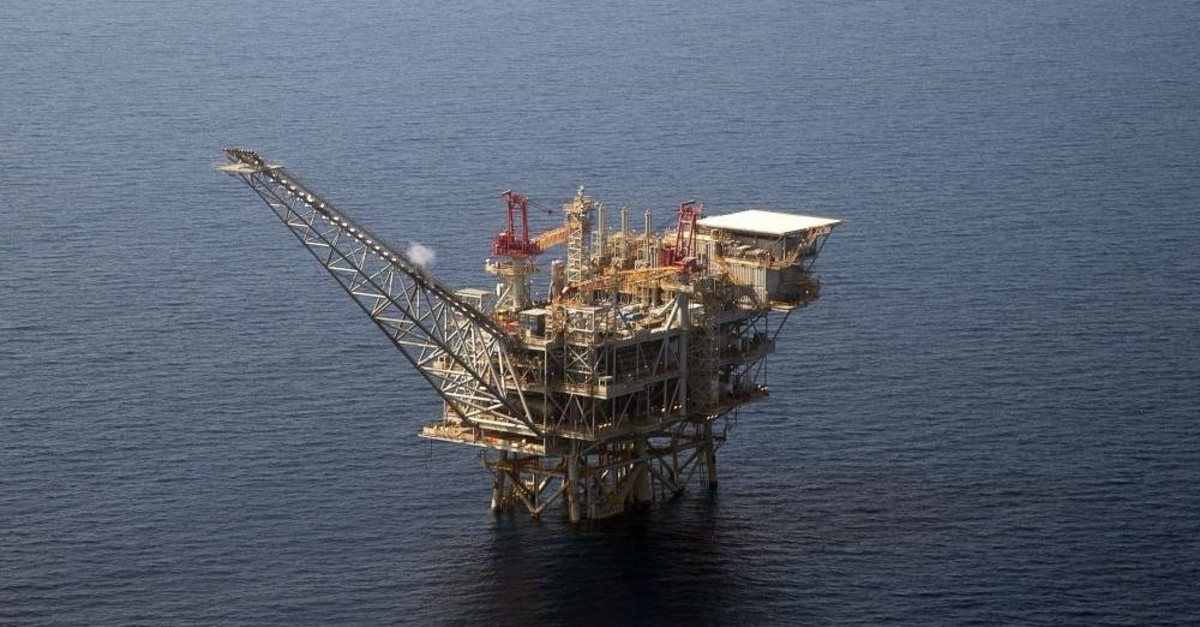 An aerial view of the Tamar gas-drill platform in the Mediterranean Sea off the coast of Israel. (AFP Photo)
by Daily Sabah with Wires Jan 15, 2020 1:52 pm

Israel began pumping natural gas to Egypt for the first time Wednesday under a $15 billion, 15-year deal to liquefy and re-export the gas to Europe.

It is the first time that Egypt, which in 1979 became the first Arab country to sign a peace treaty with Israel, has imported gas from its neighbor.

In a joint statement, Egypt's petroleum ministry and the Israeli energy ministry hailed the move as an "important development that serves the economic interests of both countries."

According to the agreement, which was signed in 2018 and amended at the end of 2019, Israel will export 85 billion cubic meters (bcm) of natural gas from Israel's Leviathan and Tamar reservoirs to Egypt over the next 15 years.

The statement confirmed that the flow of natural gas to Egypt will also enable its export to Europe via liquefied natural gas terminals in the country.

It enables "Israel to transfer quantities of its natural gas to Europe through Egyptian liquefied natural gas (LNG) plants," the joint statement said.

Israel had previously bought gas from Egypt, but land sections of the export pipeline were targeted multiple times by Sinai terrorists in 2011 and 2012. Already a big gas exporter, Egypt's LNG exports more than doubled year on year in 2019 to 4.8 billion cubic meters of gas equivalent, data from S&P Global Platts Analytics showed Tuesday, despite a slowdown in supplies over the autumn.

The gas from Israel's offshore Tamar and Leviathan fields will reach Egypt through the mainly undersea East Mediterranean Gas Company pipeline connecting the Israeli coastal city of Ashkelon with the northern Sinai Peninsula.

Tamar, which began production in 2013, has estimated reserves of up to 238 billion cubic meters (8.4 trillion cubic feet).

The companies operating the two fields – Delek Drilling and Noble Energy – reached a deal in 2018 with Egypt's Dolphinus Holdings to start exporting gas through its well-developed LNG plants.

Israel's eastern neighbor Jordan – the only other Arab country with which it has signed a peace treaty – has been purchasing gas from the Tamar field on a small scale for three years.

Noble Energy has begun pumping the first supplies of Israeli gas from the Leviathan field to Jordan, Jordan's National Electricity Company (NEPCO) said Jan. 1. The move is part of the terms of a $10 billion deal NEPCO struck with Noble Energy Inc. in 2016, the state-owned power utility said in a statement.

The deal has faced opposition in Jordan where many view Israel as an erstwhile enemy. Activists and parliamentarians have lobbied the government for years with little success in scrapping the purchase.

The government has in recent months kept quiet over the clauses of the deal in the face of negative public opinion and vocal parliamentary opposition that demands the agreement be canceled.