Renewables account for almost half of Turkey's installed power 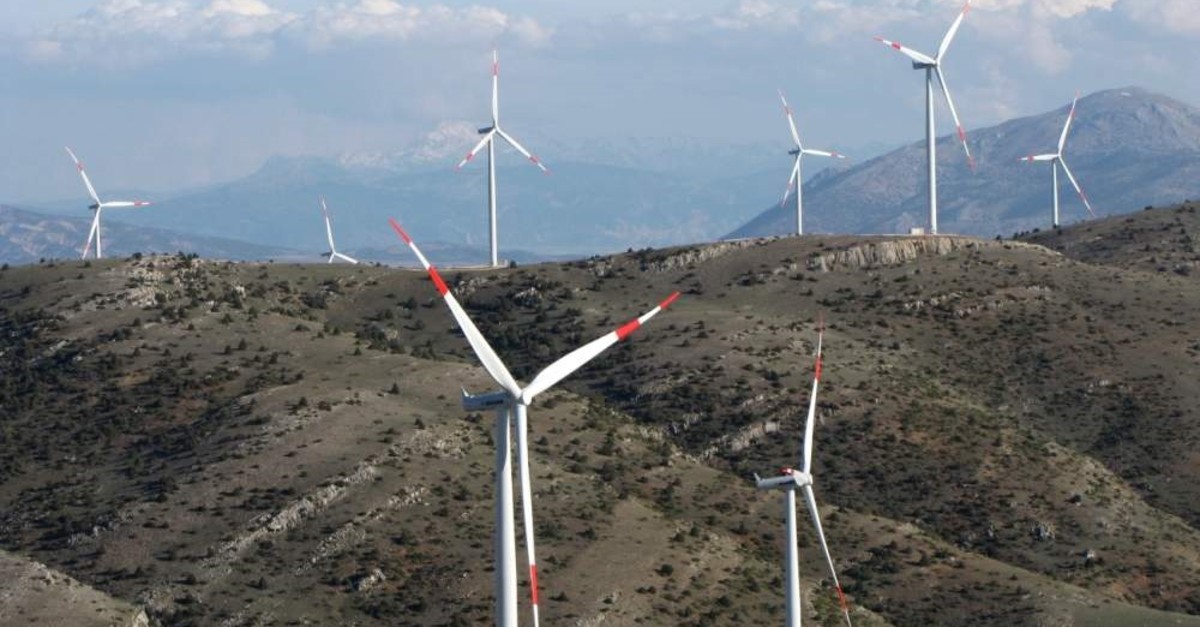 In just over a decade, Turkey has tripled its installed renewable capacity to 45,000 megawatts and invested nearly $40 billion in renewable energy projects

Turkey's renewable energy capacity has registered a remarkable surge over the last decade, with a steady increase of 11% per year amid a 7% annual capacity rise in other fuels for power generation, Deputy Energy and Natural Resources Minister Alparslan Bayraktar said Thursday during his remarks at a renewable energy conference in Istanbul.

Turkey's installed power capacity was calculated at a total of 91,267 megawatts (MW) by the end of last year, while only around a decade ago, the country possessed only 15,500 MW in renewable capacity. "The installed capacity in renewables totals 45,000 MW, accounting for 49% of the total installed power, nearly half of it," Bayraktar stressed at the Renewable Energy Outlook Conference: Turkey, Central Asia, Caucasus and Western Balkans organized by the Atlantic Council in Turkey and European Bank for Reconstruction and Development (EBRD). 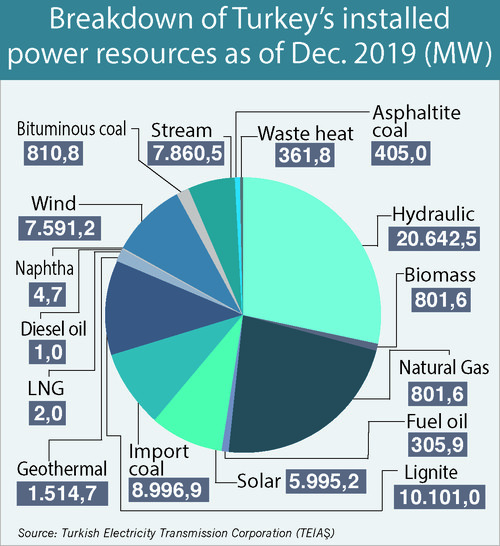 On the generation side, local and renewable resources including solar, wind, geothermal, hydropower and bio-waste, generated more than 44% of the total power, according to the preliminary data compiled from the Ministry of Energy and Natural Resources. The total gross power generation was calculated at 303,674 billion kilowatts per hour. Surprisingly, Turkey's power generation from natural gas drastically dropped to below 20% last year. In 2018, natural gas accounted for nearly 30% of the total power generation, and the figure had stood close to 50% of that amount a decade ago. In fact, for three consecutive years in 2007, 2008 and 2009, half of Turkey's electricity was generated with natural gas.

The figures also translate into the fact that 60% of the added installed power capacity has come from renewables, Bayraktar added. Thanks to this significant rise, Turkey now ranks sixth in Europe and 13th in the world in terms of renewable capacity. On June 5, 2019, the deputy minister said Turkey saw record-high figures in the power generation from renewables with 76%.

Bayraktar hailed the transformation of the Turkish energy market over the last 10 years and said: "I call this Transition 1.0. We successfully completed that. It was a pure change of market structure from a vertically integrated market model, with state-owned enterprises privatized and a market model that turned into a functioning competitive market. So this was a big change, a painful change. But the government took the initiative and showed real commitment to it," he elaborated with emphasis on the political will and commitment that is required for an expansive transformation. He also remarked the second phase of the production began with the launch of the National Energy and Mining Policy in April 2017, which he described as a very comprehensive policy document.

The deputy minister went on to explain the economic value of a stronger shift to renewables. "Each increase of renewables by 1 percent makes a $100 million contribution to the Turkish economy," he remarked. Bayraktar further underscored that the country had invested around $40 billion in renewables over the last decade, with $7 billion to $8 billion going to equipment purchases from abroad.

The local and foreign investors in the Turkish renewable energy sector are expecting the announcement of a new scheme, as Turkey's currently running feed-in-tariff program Renewable Energy Support Mechanism (YEKDEM) will expire at the end of this year. The new program will also apply feed-in tariffs although the figures will be different, especially for solar and wind power plants, Bayraktar explained without revealing further details as to the pricing mechanism.

Launched in 2011 to use the country's vast clean sources efficiently and support its development, YEKDEM offers a feed-in tariff of $0.073 per kilowatt-hour (kWh) for wind and hydropower projects, $0.105 for geothermal facilities and $0.133 for solar energy and biomass geothermal plants.

"With a view to further decreasing our dependence on imported renewable equipment, we will include the 'local content' clause in the new post-2020 investment mechanism," Bayraktar explained. "We continue negotiations with financial institutions for the local content acquisitions."

In terms of wind and solar power Renewable Energy Resource Area (YEKA) tenders, the energy ministry has asked winning companies to invest in manufacturing plants for solar panels and wind turbine equipment. The country held a 1,000 MW solar power YEKA tender in March 2017, another 1,000 MW wind power YEKA in August 2017 and another 1,000 MW of wind power in May 2019 – the last one consisting of four different plants, each with a capacity of 250 MW.

The deputy minister further highlighted that the ministry expects that Turkey's electricity demand will rise to 376 billion kilowatts an hour by 2023, and the increasing demand necessitates more integration of the local and renewable resources. "Therefore, in the next decade, we are planning to add 11,000 MW to solar and 10,000 MW to wind power capacity," Bayraktar said.

As part of this new investment mechanism, set to take effect in 2021, the ministry is also planning to address the currency exposure problem since the energy sector has been heavily affected by the currency volatility that took sway of the markets in August 2018. The renewable energy sector has been on the spot of the rumors that the next feed-in-tariff mechanism will be implemented in the Turkish lira, but the investors are reported to have a lukewarm approach to the idea. Additionally, the expansion of smart grid practices, which include integration of an infinite number of generators, transmission and distribution networks, storage systems and consumers through communal information and communication technology will also be prioritized in the new investment mechanism.

Nandita Parshad, managing director of the Sustainable Infrastructure Group at the EBRD, considers that the renewable energy discussion is no longer a choice but a necessity in the face of global climate change.

Parshad argued that the role of renewable energy is critical in tackling the climate crisis. "We can no longer think in terms of megawatts but gigawatts of clean energy. There is good news, however. The prices for renewables keep falling, and in many places, projects are being built without any subsidies," she explained.

Parshad also lauded what she considers an appropriate, renewable policy action for the country, which has proved successful in ensuring that the country reached its 2023 target of producing 30% of its electricity from renewable energy by the end of 2017.

Frederick Kempe, president and CEO of Atlantic Council, also underscored the urgency to take action to tackle climate change, the effects of which, he opined, have been very costly in monetary and environmental terms. "Climate-fueled natural disasters have cost the economy almost $1 trillion over the past five years," he asserted.

Defne Sadıklar Arslan, Turkey's representative and director of the Atlantic Council in Turkey, delivered the message of a rapid transition in the global energy sector over the next decade with the ramp-up of renewables.

"The last decade saw $2.5 trillion of renewables investment, leading to a major jump in global renewable capacity. Solar capacity alone has grown more than 25 times over the past 10 years," Arslan said.