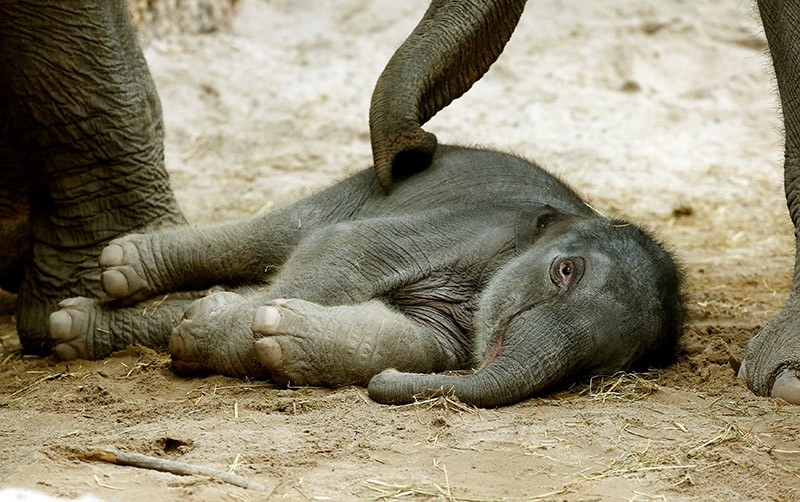 A four-day-old unnamed female baby elephant lies under its mother in the Kaeng Krachan Elephant Park at the zoo in Zurich, Switzerland February 28, 2017. (Reuters Photo)
by Mar 01, 2017 12:00 am

A British zoo is facing closure and its owner prosecution after nearly 500 of its animals died of poor nutrition, cramped conditions and hypothermia over four years, it emerged Wednesday.

A damning report into the South Lakes Safari Zoo in Cumbria, northwest England, found that 486 animals had died in the past four years, putting most of the blame on its owner David Gill.

"The conditions that these animals are being held in, is quite frankly appalling, and has led directly to the death of a number of them," they wrote in the report.

They recommended Gill be prosecuted under the Animal Welfare Act.

In 2016, 123 animals died including a West African giraffe which was euthanized a day after collapsing.

A red kangaroo also died following a head trauma and six lion cubs were euthanized because the facility was not big enough to house them.

The report notes they were "healthy cubs and nothing wrong with them".

An African spurred tortoise was electrocuted on an electric fence, while a leopard tortoise died from cold.

'This zoo has failed'

Keepers told the inspecting team they had been informed to dispose of the animals' bodies and not tell anyone about them.

Inspectors also flagged the owner's poor duty-of-care towards its staff.

She was mauled by a Sumatran tiger.

Gill is currently applying for a fresh license for the zoo after the local council, Barrow and Furness, rejected his application for an extension of his previous license back in July 2016.

Applying for a new license allows the zoo to remain open until the application is processed.

Inspectors are recommending the council reject his application and close the zoo stating that the standards maintained by Gill "fall far below the standards required in a modern zoo".

"We feel that the many instances of suffering and unnecessary deaths of animals go to show that this zoo has failed and will continue to fail the animals in their care," it said in a statement.