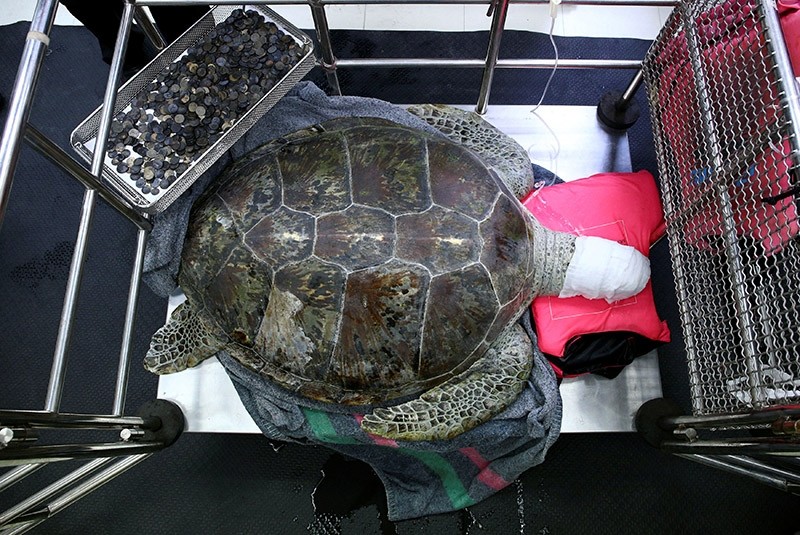 Omsin, a 25 year old femal green sea turtle, rests next to a tray of coins that were removed from her stomach at the Faculty of Veterinary Science, Chulalongkorn University in Bangkok, Thailand March 6, 2017. (Reuters Photo)
by German Press Agency - DPA
Mar 06, 2017 12:00 am

A team of Thai veterinary surgeons on Monday successfully removed nearly a thousand coins from a turtle's stomach, the world's first such surgery.

"The coins came from many countries, mainly from Asia," NuntarikaChansoe said in a press briefing following the surgery.

Tossing coins into ponds is believed by many to bring good luck, and, in ponds with turtles, longevity, as the animals can live well over100 years. Some also believe they are "making merit" for the animals, which is a Buddhist tradition.

Omsin is a 25-year-old green turtle sent from a local turtle pond in Sriracha, a town 120 kilometers south-east of Bangkok, to the Thai navy's Sea Turtle Conservation Centre nearby after the local operator closed down in June.

In February, veterinarians at the Bangkok University asked the navy to send Omsin to its animal hospital for a check-up, after the team found the turtle to be swimming sideways without using her left leg.

"At first I thought the turtle might have been paralysed. But an X-ray and a CT scan revealed a massive chunk of objects," Nuntarika said.

"It was quite a difficult and challenging task," said Pasakorn Briksawan, one of the surgeons operating on Omsin.

"After we removed the coins one by one, it became obvious the turtle was breathing much better," Nuntarika added.

Once Omsin recuperates, she will be sent back to the navy before being released back to nature.