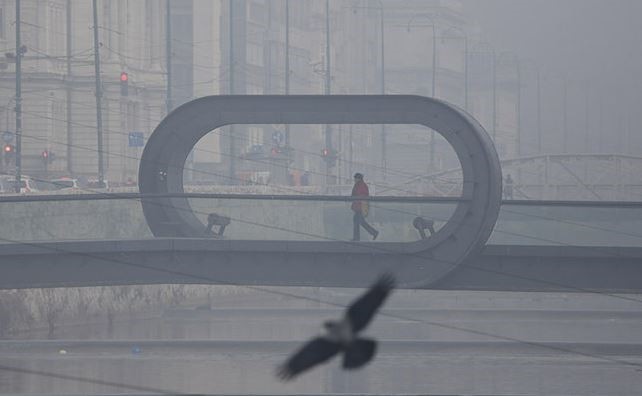 Stuck between a landfill and a coal-fired power plant, residents of the Bosnian village of Divkovici are dying of asphyxia, poisoned by some of the most polluted air in Europe.

"In a few years, it will be like Chernobyl here: houses without souls," said unemployed Goran Stojak.

His father died last year of lung cancer, and he is afraid to undergo medical tests for fear of "bad news". His sons, aged just one and two, are already suffering from respiratory problems.

Tuzla, the industrial city housing the power plant, is one of five Balkan cities that are among the 10 most polluted in Europe based on concentrations of particulate matter, according to the World Health Organization.

Pljevlja in Montenegro and the Macedonian cities of Skopje, Tetovo and Bitola are also in the dirty top 10. All are home to industries based on coal or lignite, which is used in addition to heat homes.

At the bottom of the basin in which Tuzla sits and polluted air is trapped, the 110,000 residents suffocate in winter.

In Divkovici, where one can see the red and white chimneys of the power plant, the atmosphere is saturated with sulphur dioxide as well as fine particles.

"Only about 30 of Divkovici's 500 or so residents remain. Those who can, leave. Cancer is wreaking havoc on the village, where life expectancy is 42 years according to our calculations," said Stojak, who is 43.

In the Macedonian capital meanwhile, Aco Ivanov, who lives in the most polluted neighbourhood of Novo Lisice, said he has not left his house for a month.

"The winters in Skopje are a hell for me," he said. "The air is acrid, stifling, especially in the evening."

The Western Balkan countries of Bosnia, Serbia, Montenegro, Macedonia and Kosovo are together home to about 15 thermal power stations, on which they are highly dependent.

According to a study published in March 2016 by the Brussels-based Health and Environment Alliance, these plants dating back to communist Yugoslavia are responsible for a public health bill of around 2.5 to 8.5 billion euros ($2.6 to 9 billion).

It claims that damage is suffered not only by those living in the region but by people in other European countries, affected by pollution carried in the winds.

"In Tuzla's thermal power plant, production units are among the oldest in Europe," said Zvjezdan Karadzin, a professor of environmental security in Tuzla.

"Emissions of some pollutants, such as sulphur dioxide, can be up to 30 times higher than the top levels authorised by European standards."

Elektroprivreda BiH, the public company that runs the Tuzla plant, declined to comment.

Karadzin said that a second "chronic" problem was that homes were being heated with coal fires, which he termed "the leading cause of pollution in winter".

The mining and electricity sectors employ around 23,000 people in Bosnia, which has a population of 3.5 million.

One of the poorest countries in the region, it produced some 14,400 gigawatts of electricity in 2015, 60 percent of it from coal-fired power stations. It is one of the few Balkan states to export electricity, which brought in 165 million euros in 2016.

He said the disease usually afflicts people between the ages of 55 and 61, but in the Tuzla area it is starting to strike earlier.

"There are more and more who are 50 or 51 years old, or even under 50. And we've even had some cases of children suffering from lung cancer," said Dedic.

Dzemila Agic at the Centre for Ecology and Energy, a Bosnian NGO, is worried about the increase in deaths in Tuzla over winter, noting that the numbers were up by 50 percent in January 2017 from January 2015.

According to her, investing around 100 million euros in a desulphurisation device could reduce toxic emissions of the power plant by 90 percent. But she said that for the plant's operators, this measure was too expensive.

"They do not take into account the damage to health," said Agic.

It intends to do this by closing production units, adding filtering devices and constructing more modern infrastructure.