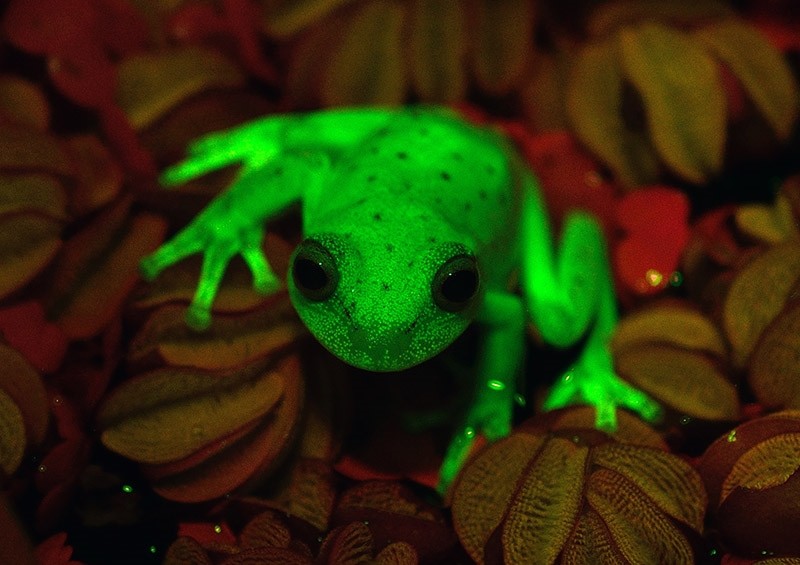 The first naturally fluorescent frog was discovered recently in Argentina -- almost by chance, a member of the team of researchers told AFP Thursday.

Argentine and Brazilian scientists at the Bernardino Rivadaiva Natural Sciences Museum made the discovery while studying the metabolic origin of pigments in a tree-frog species common to South America.

Under normal light the frog's translucent skin is a muted yellowish-brown color with red dots, but when the scientists shone an ultraviolet light on it, it turned a celestial green.

According to one of them, Carlos Taboada, the case is "the first scientific record of a fluorescent frog."

"We were very excited," said his fellow researcher Julian Faivovich. "It was quite disconcerting."

He said the discovery "radically modifies what is known about fluorescence in terrestrial environments, allowing the discovery of new fluorescent compounds that may have scientific or technological applications."

It also "generates new questions about visual communication in amphibians," he said.

The team studied some 200 more examples to ensure the phenomenon was not due to the frog's captivity, and detected the fluorescent properties in all the specimens.

Maria Lagorio -- an independent researcher and expert in fluorescence, who the research team contacted after the discovery -- told AFP that the trait is common in aquatic species and seen in some insects, "but has never been scientifically reported in amphibians."

The finding was recently published in Proceedings of the National Academy of Sciences.