Oceans ‘under threat as never before,’ UN chief Guterres warns 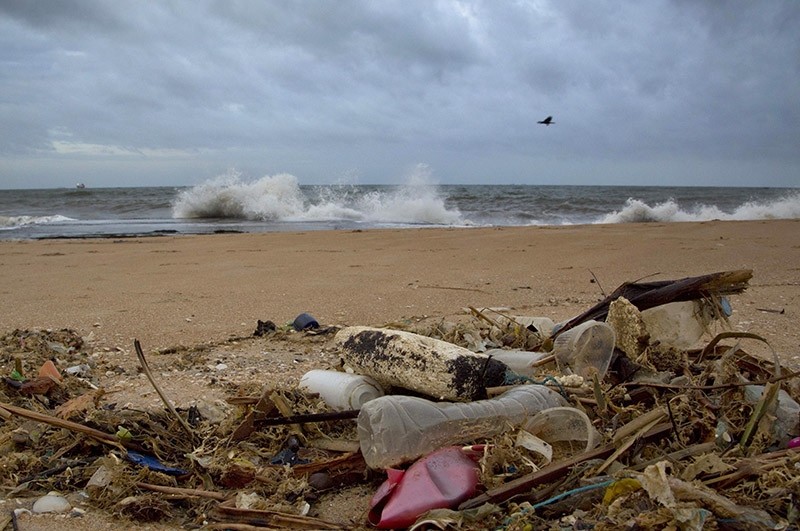 In this Aug. 13, 2015, file photo, a plastic bottle lies among other debris washed ashore on the Indian Ocean beach in Uswetakeiyawa, north of Colombo, Sri Lanka. (AP Photo)
by Compiled from Wire Services Jun 06, 2017 12:00 am

Secretary-General Antonio Guterres opened the first U.N. conference on oceans Monday with a warning that the seas are "under threat as never before," noting one recent study warns that discarded plastic garbage could outweigh fish by 2050 if nothing is done.

The U.N. chief told presidents, ministers, diplomats and environmental activists from nearly 200 countries that oceans — "the lifeblood of our planet" — are being severely damaged by pollution, garbage, overfishing and the effects of climate change.

The five-day conference, which began on World Environment Day, is the first major event to focus on climate since U.S. President Donald Trump announced Thursday that the United States will withdraw from the 2015 Paris Climate Agreement — a decision criticized by Bolivian President Evo Morales and other speakers Monday.

Morales took a swipe at the United States from the UN podium, saying the withdrawal was "denying science, turning your back on multilateralism and attempting to deny a future to upcoming generations."

These actions are "the main threat to Mother Earth and to life itself," he said.

Guterres said the aim of the conference is "to turn the tide" and solve the problems that "we created."

He said competing interests over territory and natural resources have blocked progress for too long in cleaning up and restoring to health the world's oceans, which cover two-thirds of the planet.

"We must put aside short-term national gain to prevent long-term global catastrophe," Guterres said. "Conserving our oceans and using them sustainably is preserving life itself."

The first step to turn the tide is "ending the artificial dichotomy between economic demands and the health of our seas," he asserted.

"The conservation and sustainable use of marine resources are two sides of the same coin."

Guterres called for concrete steps, from expanding marine protected areas to the management of fisheries, reducing pollution and cleaning up plastic waste.

Guterres cited a 2016 World Economic Forum report on "The New Plastics Economy," which said the best research estimates there are over 150 million tons of plastics in the ocean.

"In a business-as-usual scenario, the ocean is expected to contain 1 ton of plastic for every 3 tons of fish by 2025, and by 2050, more plastics than fish (by weight)," the report said.

General Assembly President Peter Thomson, a Fijian diplomat, said, "The time has come for us to correct our wrongful ways."

"We have unleashed a plague of plastic upon the ocean that is defiling nature in so many tragic ways," he said. "It is inexcusable that humanity tips the equivalent of a large garbage truck of plastic into the ocean every minute of every day."

Thomson also warned that illegal and destructive fishing practices and harmful subsidies for fisheries "are driving our fish stocks to tipping points of collapse." And, he said, the increasing human-caused carbon emissions tied to climate change are causing rising sea levels by warning the oceans and harming marine life by making the seas more acidic with less oxygen.

Thomson said the conference probably represents the best opportunity ever "to reverse the cycle of decline that human activity has brought upon the ocean" and spur action to meet the U.N. goal for 2030 to conserve and manage the ocean's resources.

UN member-states are working on a "call to action" from governments, civil society and businesses that commit to taking steps to clean up the oceans and work preserve what is arguably the Earth's most important resource.

Targets include protecting at least 10 percent of coastal and marine environments by 2020, reducing ocean pollution and strengthening ways to fight illegal, unreported and unregulated fishing.