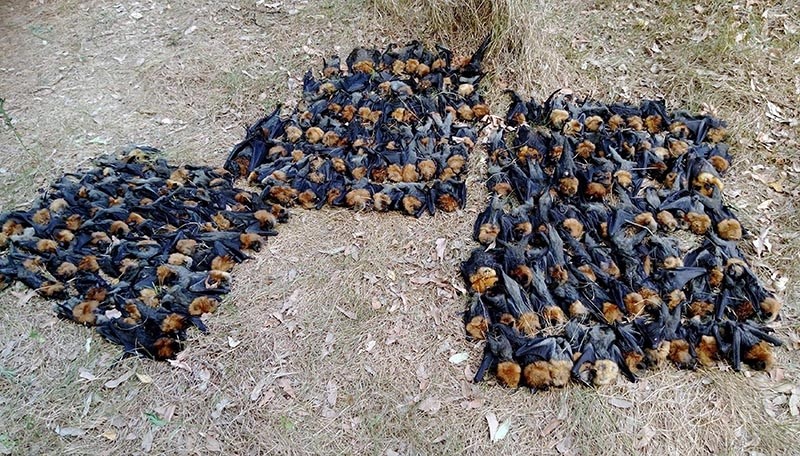 This handout picture taken Jan. 8, 2018 and released by Help Save the Wildlife and Bushlands in Campbelltown shows dead bats on the ground in Sydney. (AFP Photo)
by Compiled from Wire Services Jan 09, 2018 12:00 am

Despite attempts by volunteers to save them, hundreds of flying foxes in a Sydney suburb dropped dead due to the sweltering heat over the weekend, animal rescuers said Tuesday.

The record-breaking temperature reached up to 47.3 degrees Celsius in the western suburb of Penrith on Sunday, making it the hottest place on the planet.

In Campbelltown, where the temperature reached 45 degrees, thousands of flying foxes fell from trees due to heat exhaustion.

"We had an extensive heatwave and we lost a multitude of flying foxes, mostly babies and juveniles," Cate Ryan, a volunteer with wildlife rescue group WIRES Southwest, told DPA on Tuesday.

"We lost at least 500 young ones," Ryan said, adding the temperature in the colony was recorded as 47 degrees Celsius at one point Sunday.

"They basically boil," she told the local Camden Advertiser. "It affects their brain -- their brain just fries and they become incoherent."

Volunteers were able to use fluids to save about 80 juveniles.