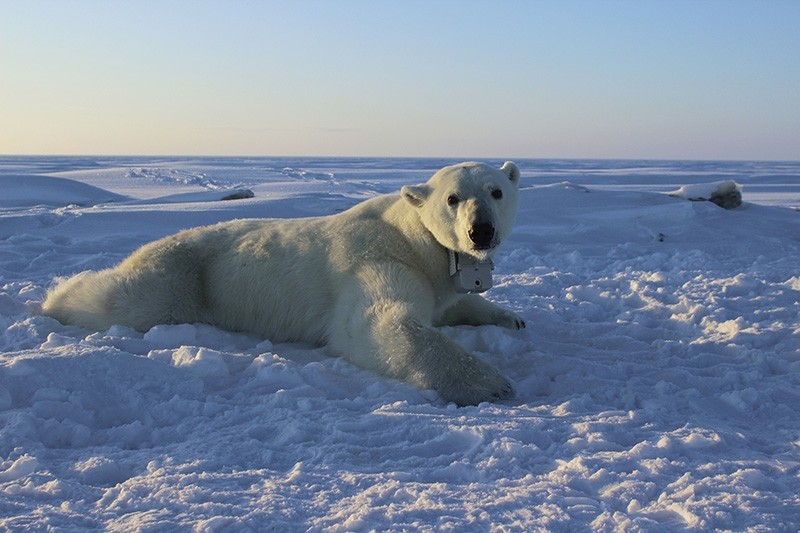 Polar bears are struggling to find enough seals to eat, and the problem will get worse as the planet warms because their metabolisms are much faster than previously thought, researchers said Thursday.

The report in the journal Science tracked nine female polar bears in the Arctic's Beaufort Sea during the spring, which is usually prime feeding season.

They found that polar bear metabolism is 1.6 times higher than prior estimates.

Five of the nine bears lost body mass over the span of eight to 11 days because they were not catching enough prey to match their energy demands.

"Four of the bears lost 10 percent or more of their body mass," said the report.

"One bear lost not only her fat reserves, but lean muscle as well."

Lead author Anthony Pagano, a doctoral candidate at the University of California, Santa Cruz said the bears were getting skinnier just as they were supposed to be feasting.

"This was at the start of the period from April through July when polar bears catch most of their prey and put on most of the body fat they need to sustain them throughout the year," he said.

Previous attempts to estimate polar bear metabolism were based on certain assumptions that turned out to be false.

For instance, researchers used to suggest that because the bears are primarily "sit and wait" hunters, they expended minimal energy while hunting.

They also posited that polar bears could lower their metabolic rate to save energy if they were not catching enough seals.

"We found that polar bears actually have much higher energy demands than predicted. They need to be catching a lot of seals," said Pagano, who is also a wildlife biologist with the U.S. Geological Survey (USGS).

The Arctic is warming twice as fast as the rest of the planet, and melting ice forces polar bears to travel greater distances to catch their main meal --- young seals.

"The abundance of sea ice across the Arctic is decreasing at a rate of 14 percent per decade, which is likely reducing polar bears' access to their prey," said the study.

That means polar bears end up expending more energy in the summer, a time when they are also fasting until ice returns in the fall.

Polar bear survival has been declining in the past decade, and the population dropped about 40 percent during that period, according to the USGS.

Researchers were able to gain a better understanding of polar bear metabolism by capturing the bears and fitting them with collars that recorded video, locations and activity levels.

They also analyzed blood and urine samples upon capture and then again at recapture a week or more later.

"We now have the technology to learn how they are moving on the ice, their activity patterns and their energy needs, so we can better understand the implications of these changes we are seeing in the sea ice," Pagano said.