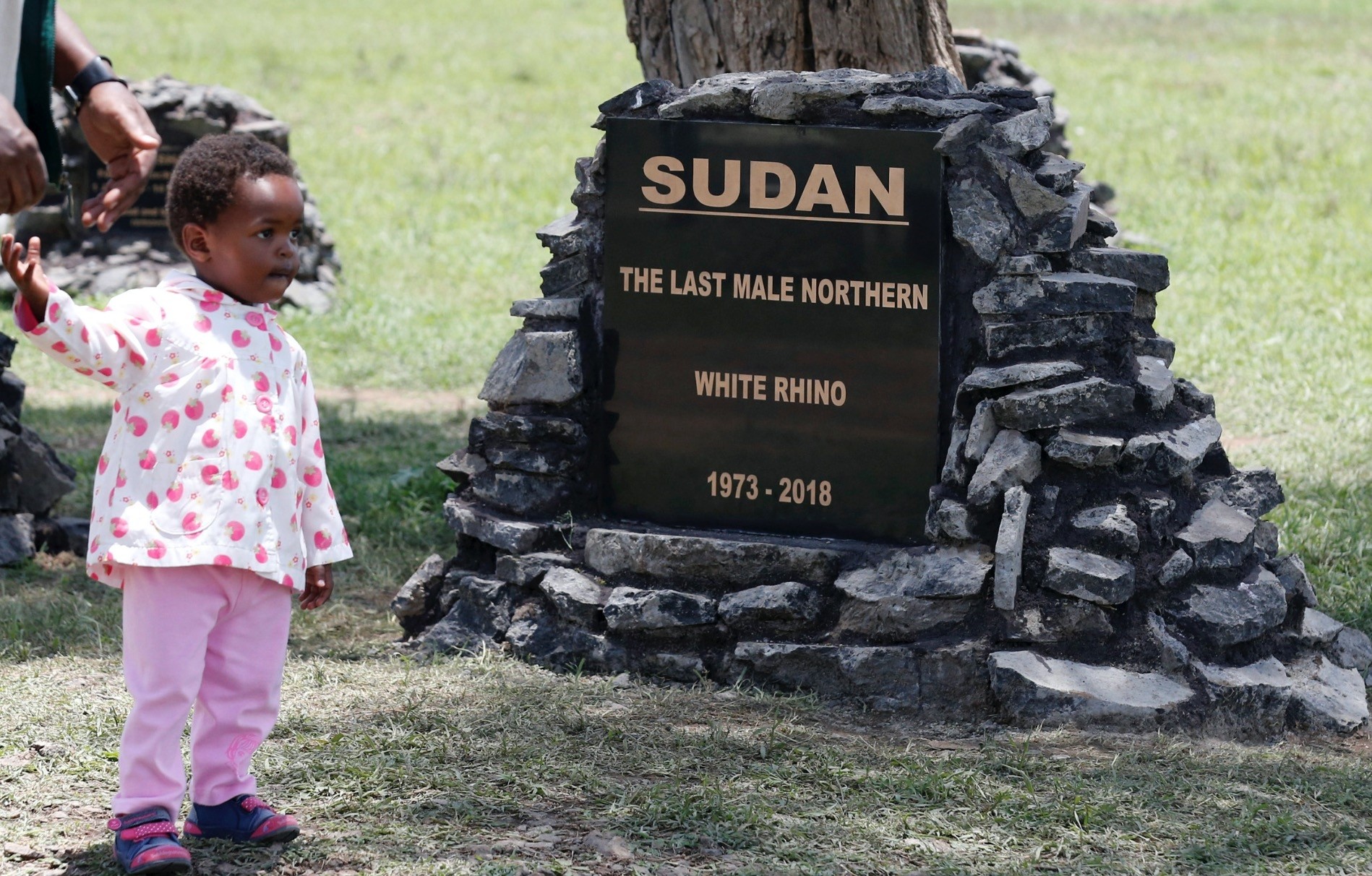 Sudan, the last remaining northern white male rhino, which died March 20 at the age of 45, on Saturday joined 18 other iconic rhinos at a memorial at a conservatory in the foothills of Mount Kenya.

"Fare thee well Sudan. You have done your work to highlight the plight of rhino species across the world; now the onus is on us to ensure that rhino populations thrive across our planet," conservatory officials said in a statement.

About 30 heavily armed rangers at the 90,000-acre Ol-Pejeta Conservancy in Laikipia could be seen walking past Sudan's tombstone that towered above those of the other 18 rhinos killed by poachers for their horns.

James Mwenda, who had been taking care of Sudan as lead caretaker for more than five years, told Anadolu Agency (AA) that three years ago he noticed something that changed the way he would care for the beloved beast.

"In March of 2015, I was taking care and feeding Sudan as usual and I noticed tears trickling down his eyes, that are when I vowed to take care of him like I would take care of a human being. He needed someone by his side," Mwenda said.

"I never slept until I knew that Sudan was well asleep. The threat of poachers who could enter this conservation and kill animals was also present. Life without Sudan is difficult indeed but his death which spells out extinction for this species should be a wake-up call for us humans," he added.

Mwenda was first to discover Suni, one of the last two breeding northern white males after he died at the age of 34 in 2014 at the conservancy, and says he knew humans had opened the door of extinction for animals because Sudan was too old to breed.

According to Ol-Pejeta CEO Richard Vigne, the species of the northern whites is now almost beyond saving as the science which they depended on is not reliable.

"We have to come up with new ways in which to create new embryos from Sudan's sperm which has been stored. In vitro fertilization may help but it is very expensive but if it works then it could help save the lives of many animals which are on the brink of extinction. "We humans have the power to stop the extinction of our animals. We are doing this for thousands of species across the planet. Sudan has achieved more than any of us will ever achieve in life. He is a hero."

"Wildlife is our heritage and we must protect this heritage," Balala told to a team of veterinarians, armed guards, conservationists and others at the ceremony Saturday. "Sudan represents conservation. We want to use Sudan. We are going to change our laws. Anyone who is caught with ivory or killing wildlife will be jailed for life." He added that Kenya has 34,000 elephants and 1,284 rhinos, including 800 black rhinos.

The Conservancy continues to take care of two female northern white rhinos - Najin and Fatu - but they suffer from various health problems and are infertile. Sudan was 45 in human years, making him a centenarian "in rhino years," according to experts. The late rhino was originally from the same country that bears his name. That was before South Sudan gained independence after a civil war that has also claimed the lives of thousands of endangered species, as the illicit wildlife trade flourishes in the fog of human war.