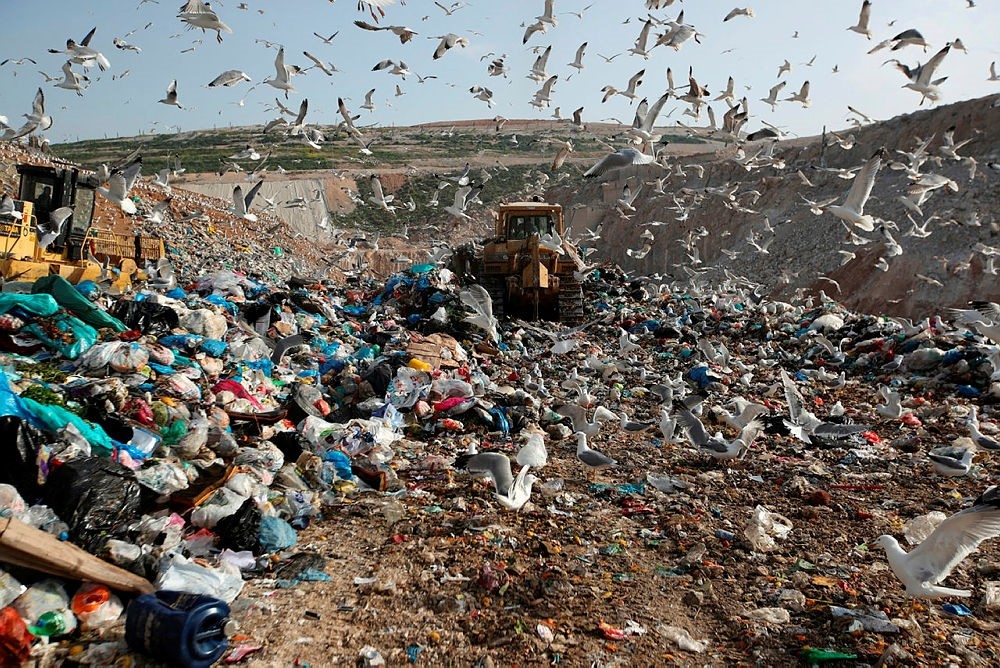 Earthmovers push mountains of garbage as seagulls fly over the country's largest landfill at Fyli on the outskirts of Athens. (AP Photo)
by Associated Press
Apr 20, 2018 12:00 am

Cities and nations are looking at banning plastic straws and stirrers in hopes of addressing the world's plastic pollution problem. The problem is so large, though, that scientists say that's not nearly enough.

Australian scientists Denise Hardesty and Chris Wilcox estimate, using trash collected on U.S. coastlines during cleanups over five years, that there are nearly 7.5 million plastic straws lying around America's shorelines. They figure that means 437 million to 8.3 billion plastic straws are on the entire world's coastlines.

But that huge number suddenly seems small when you look at all the plastic trash bobbing around oceans. University of Georgia environmental engineering professor Jenna Jambeck calculates that nearly 9 million tons (8 million metric tons) end up in the world's oceans and coastlines each year, as of 2010, according to her 2015 study in the journal Science.

That's just in and near oceans. Each year more than 35 million tons (31.9 million metric tons) of plastic pollution are produced around Earth and about a quarter of that ends up around the water.

Seabirds can ingest as much as 8 percent of their body weight in plastic, which for humans "is equivalent to the average woman having the weight of two babies in her stomach," says Hardesty of Australia's Commonwealth Scientific and Industrial Research Organisation.

Organizers of Earth Day, which is Sunday, have proclaimed ending plastics pollution this year's theme. And following in the footsteps of several U.S. cities such as Seattle and Miami Beach, British Prime Minister Theresa May in April called on the nations of the British commonwealth to consider banning plastic straws, coffee stirrers and plastic swabs with cotton on the end.

McDonald's will test paper straws in some U.K. locations next month and keep all straws behind the counter, so customers have to ask for them. "Together with our customers we can do our bit for the environment and use fewer straws," says Paul Pomroy, who runs the fast-food company's U.K. business.

The issue of straws and marine animals got more heated after a 2015 viral video showing rescuers removing a straw from a sea turtle's nose in graphic and bloody detail.

But a ban may be a bit of a straw man in the discussions about plastics pollution. Straws make up about 4 percent of the plastic trash by piece, but far less by weight.

Straws on average weigh so little — about one sixty-seventh of an ounce or .42 grams — that all those billions of straws add up to only about 2,000 tons of the nearly 9 million tons of plastic waste that yearly hits the waters.

"Bans can play a role," says oceanographer Kara Lavendar Law, a co-author with Jambeck of the 2015 Science study. "We are not going to solve the problem by banning straws."

Scientists say that unless you are disabled or a small child, plastic straws are generally unnecessary and a ban is start and good symbol. These items that people use for a few minutes but "are sticking round for our lifetime and longer," Lippiatt says.

Marcus Eriksen, an environmental scientist who co-founded the advocacy group 5 Gyres, says working on bans of straws and plastic bags would bring noticeable change. He calls plastic bags, cups and straws that break down in smaller but still harmful pieces the "smog of microplastics."

"Our cities are horizontal smokestacks pumping out this smog into the seas," Eriksen says. "One goal for advocacy organizations is to make that single-use culture taboo, the same way smoking in public is taboo."

Steve Russell, vice president of plastics for the American Chemistry Council, said people can reduce waste by not taking straws, but "in many cases these plastics provide sanitary conditions for food, beverages and personal care."

The key to solving marine litter, Russell says, is "in investing in systems to capture land-based waste and investing in infrastructure to convert used plastics into valuable products."

Even though Jambeck spends her life measuring and working on the growing problem of waste pollution, she's optimistic.

"We can do this," Jambeck says. "I have faith in humans."