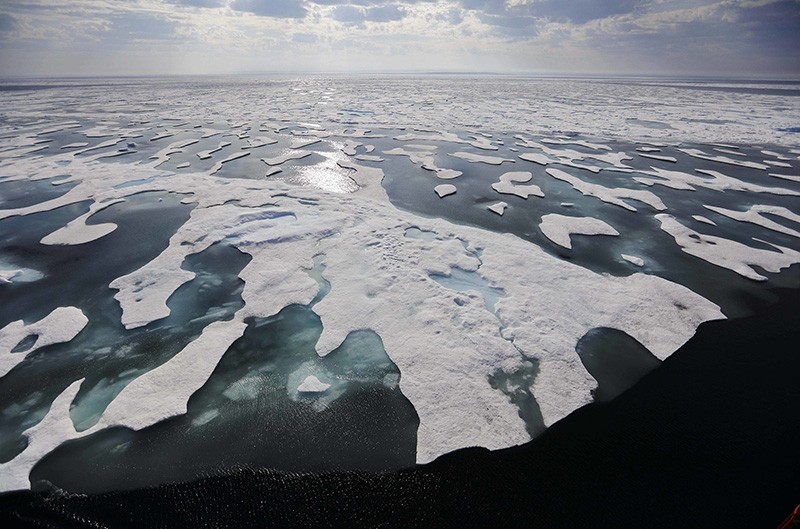 Researchers warned Tuesday of a "troubling" accumulation of microplastics in sea ice floating in the Arctic ocean, a major potential source of water pollution as global warming melts the sheets of frozen water.

A team from the Alfred Wegener Institute for Polar and Marine Research (AWI) found 17 different plastic types in ice samples gathered during three Arctic expeditions on board the research icebreaker Polarstern in 2014 and 2015.

One sample contained the highest concentration of microplastics ever found in sea ice -- up to 12,000 particles per litre of frozen water.

This was two- to three times higher than any past measurement, the research team wrote in the journal Nature Communications.

The discovery suggests microplastics "are now ubiquitous within the surface waters of the world's ocean," sea ice physicist Jeremy Wilkinson of the British Antarctic Survey said in a comment on the study.

"Nowhere is immune," he said via the Science Media Centre in London.

Sea ice grows from the freezing of seawater directly underneath the existing ice, thus incorporating floating microplastics as it grows downward, he explained.

This means the plastics were present as the ice was growing, and drifting, in the Arctic Ocean.

Of particular concern was the particles' small size.

Some were only 11 micrometers across -- about a sixth the diameter of a human hair, the team said. A micrometer is a millionth of a meter.

This "means they could easily be ingested by Arctic micro-organisms" such as small crustaceans on which fish feed," said study coauthor Ilka Peeken, an AWI biologist.

"No-one can say for certain how harmful these tiny plastic particles are for marine life, or ultimately also for human beings," she said.

Micro-plastics are less than five millimeters (0,2 inches) long, about the size of a sesame seed.

They come in the form of "micro-beads" used in face scrubs and toothpaste, or are created when larger pieces are degraded by the Sun, temperature changes, mechanic abrasion, or ocean wave action.

The contribution of microplastics to the headache of ocean pollution is unclear.

According to environmental group WWF, 8.8 million tonnes of plastic enters the oceans every year, the equivalent of a garbage truck dumping a full load every minute.

On current trends, warns the UN, there will be more plastic than fish in the sea by 2050.

For the study, Peeken and a team used a spectrometer to bombard the ice cores with infrared light. They analyzed the radiation reflected by the plastic pieces to determine their likely origins.

Samples from the Canada Basin, fed by water from the northeast Pacific via the Bering Strait, were high in polyethylene used in packaging material, leading the authors to conclude these particles came mainly from the so-called Great Pacific Garbage Patch -- a swirling plastic dump in the ocean now bigger than France, Germany and Spain combined.

Others were rich in particles from paint and varnish used on ships, while nylon bits from fish nets were "found frequently in almost all sea ice cores."

"Fisheries accounts for a major share of the ship traffic in the Arctic Ocean and continuous reduction of sea ice is assumed to increase fisheries further, particularly in the high Arctic," wrote the team.

The sea ice binds the particles for between two and 11 years, said the researchers.

This is the time it takes for the sheets to travel southward from the seas of Siberia and the North American Arctic to the Fram Strait between Greenland and Norway, where they melt while new ones are formed in the north -- a cycle accelerated by global warming.

"The melting of multi-year sea ice exacerbated by climate change could reasonably lead to the release into the water column of large amounts of plastics stored in the Arctic sea ice cover," Newcastle University oceanographer Miguel Angel Morales Maqueda said in another comment.

What happens to it then, is unclear -- do the particles remain in the Arctic, are they transported to waters further south, or do they sink?

Other studies have recently warned that humans are ingesting microplastics in shellfish, tap water and bottled water.