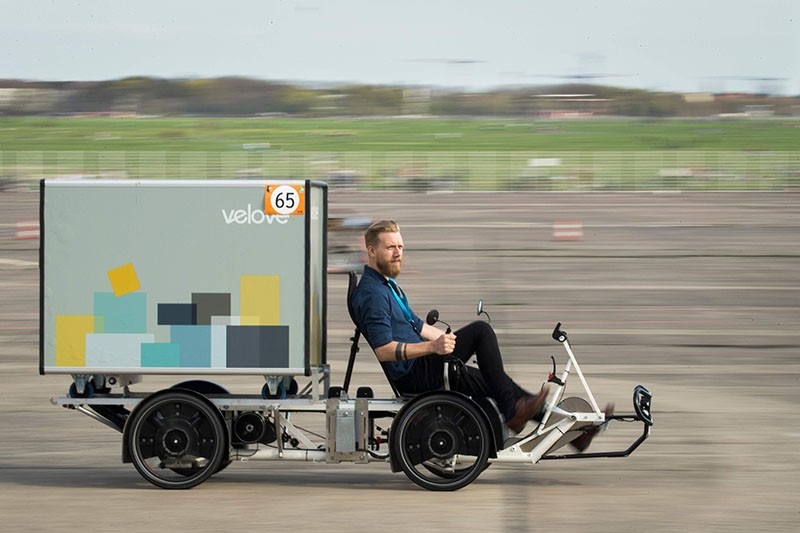 Whether they're hauling parcels or children, cargo bikes are becoming a familiar sight in German cities as the nippy, clean alternative to cars and delivery vans -- and shaking up urban transport in the process.

A desire to go green has been key to the rise of cargo bikes in a country where dozens of smog-choked cities are considering diesel driving bans to combat air pollution.

"The diesel scandal is a major incentive," said Arne Behrensen, one of the top promotors of cargo bikes in Germany, a mode of transport as old as the bicycle itself which refers to a two- or three-wheeled bike with a fixed load carrier, usually at the front.

Financial incentives, more choice in models and the promise of zipping past rush-hour traffic in the bike lane have added to the appeal.

"In the '90s, we were happy to sell one a year," said Gaya Schuetze of Berlin's Mehringhof bicycle shop, one of the capital's leading cargo bike centers.

"Then we noticed more and more interest, first from families and then companies."

Commonplace in northern Europe until the mid-20th century, freight bikes were used to deliver everyday essentials such as milk, bread and newspapers.

But these heavy, unwieldy bikes quickly fell out of favor and into oblivion as motorized vehicles gained ground.

The cargo bike's revival began some two decades ago in cycling-mad Denmark and the Netherlands, blessed with flat landscapes and comfortable bike lanes, before reaching Germany.

Today Germany is Europe's largest market for cargo bikes in terms of volume -- with industry data showing sales for electrically assisted cargo bikes alone surged to 21,000 in 2017, 42 percent over the previous year.

Over the years, cargo bikes have evolved from bulky two-wheelers that required serious leg muscle.

Modern upgrades offer lighter frames and more spacious carriers, while e-cargo bikes have allowed the less physically active or those living in hilly areas to also jump in the saddle.

According to the European CycleLogistics project, a staggering 174 models of cargo bikes are now available, while some 50 brands vied for attention at Berlin's International Cargo Bike Festival in April.

Industry observers say the cargo bike craze has yet to run its course because "they can handle situations where a car previously seemed indispensable", says Becker.

"In an average European city, half of all motorized trips related to goods transport could be shifted to bicycle or cargo bikes," Karl Reiter of the CycleLogistics project calculated in a 2014 study, based on journeys of a maximum of seven kilometers (4.3 miles) with loads of less than 200 kilos (440 pounds).

But the "workhorse of the 21st century", as the Frankfurter Rundschau newspaper dubbed it, has yet to win over the masses.

Just one percent of Germans own a cargo bike, a study released by the transport ministry in March found -- although seven percent said they considered buying one.

Becker believes this will change "in the next few years".

Keen to promote the climate-friendly cargo bikes, several initiatives have emerged to lend them to companies and individuals for free trials.

Last year, German firm Velogut began loaning them out to 150 companies in Berlin.

Among the sign-ups have been photographers, coffee and pastry vendors, florists, chimneysweeps, beekeepers, Christmas tree deliverers and even a travelling anesthetist.

The federal government has also got in on the act by introducing a rebate of up to 2,500 euros for the purchase of an e-cargo bike with a load of more than 150 kilos, while Berlin authorities offer subsidies of 500 to 1,000 euros.

"If they want clean air, they have to protect us," said Antje Merschel, co-initiator of a recent Berlin referendum on cycling policies.

"We're not going to risk our lives on a bike."

But the big players in delivery are still waiting for bike manufacturers to catch up and mass-produce reliable low-maintenance models, which are so far mostly made by small, independent companies.

There is also the complication of needing "micro-hubs" in often high-rent urban areas from where couriers can collect trucked-in goods for the final kilometers to the client's front door.