White rhino in US zoo pregnant, giving hope for survival of subspecies 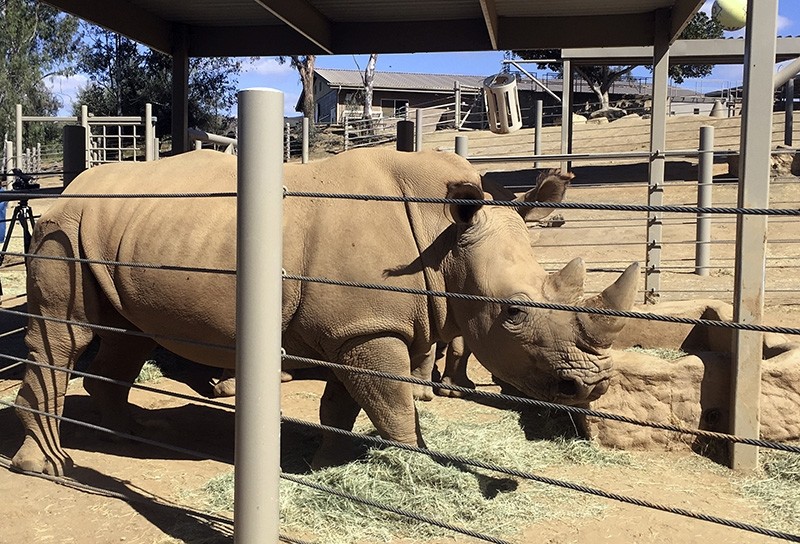 A southern white rhino has become pregnant through artificial insemination at the San Diego Zoo Safari Park — giving hope for efforts to save a subspecies of one of the world's most recognizable animals, researchers announced Thursday.

Scientists will be watching closely to see if the rhino named Victoria can carry her calf to term over 16 to 18 months of gestation.

If she does, researchers hope someday she could serve as a surrogate mother and could give birth to the related northern white rhino, whose population is down to two females after decades of decimation by poachers. The mother and daughter northern white rhinos live in a Kenya wildlife preserve but are not believed to be capable of bearing calves.

News of Victoria's pregnancy was confirmed two months after the death of the last northern white male rhino named Sudan, who was also at the Kenya preserve and was euthanized because of ailing health in old age.

Victoria is the first of six female southern white rhinos the San Diego Zoo Institute for Conservation Research is testing to determine if they are fit to be surrogate mothers before using the limited sperm and eggs of the northern white rhino that are in storage to impregnate them.

The scientists want to use the frozen sperm and eggs that were taken from dead northern white rhinos to bring back a herd through artificial insemination, in vitro fertilization and embryo transfer.

"The confirmation of this pregnancy through artificial insemination represents a historic event for our organization but also a critical step in our effort to save the northern white rhino," said Barbara Durrant, director of reproductive Sciences at the San Diego Zoo Institute for Conservation Research.

But more challenges lie ahead, with artificial insemination of rhinos in zoos rare so far and resulting in only a few births.

Victoria and the other five female rhinos were relocated to San Diego's Safari Park in 2015 and scientists will soon start developing artificial insemination techniques and embryo transfer techniques for them in their effort to produce northern white rhino calves.

"We will know that they have proven themselves to be capable of carrying a fetus to term before we would risk putting a precious northern white rhino embryo into one of these southern white rhinos as a surrogate," Durrant said.

Once that happens, there will be more work to develop techniques that include maturing eggs, fertilizing eggs and growing embryos to the stage where they can be transferred into the surrogate rhinos. While embryos have been created for southern white rhinos, they haven't been for northern white rhinos — so there's no guarantee that the process will work.

The San Diego Zoo Institute for Conservation Research has the cell lines of 12 different northern white rhinos stored in freezing temperatures at its "Frozen Zoo."

The ultimate goal is to create a herd of five to 15 northern white rhinos that would be returned to their natural habitat in Africa. That could take decades.

Some groups have said in vitro fertilization is being developed too late to save the northern white rhino, whose natural habitat in Chad, Sudan, Uganda, Congo and Central African Republic has been ravaged by conflicts in the region. They say the efforts should focus on other critically endangered species with a better chance at survival.

The southern white rhino and another species, the black rhino, are under heavy pressure from poachers who kill them for their horns to supply illegal markets in parts of Asia.