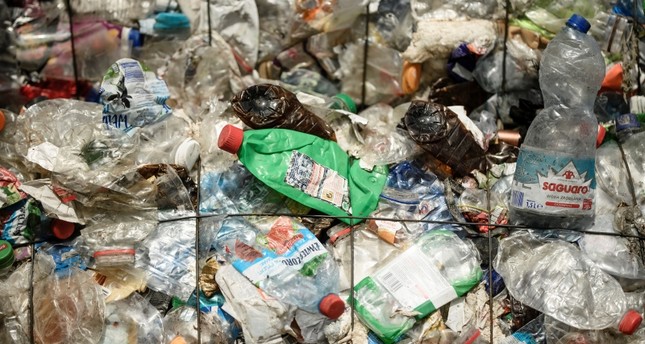 Plastic straws, plates, cotton buds and balloon sticks are among a number of plastic items that should be banned in the European Union, according to a proposal to tackle marine waste presented Monday by the bloc's executive.

More than 80 percent of marine litter is plastic, the European Commission said. Its proposed rules target the 10 single-use plastic items most commonly found in Europe's seas and beaches, as well as discarded fishing gear.

"We are at risk of choking our oceans in plastic, with a knock-on effect on our food chain and human health," said commission Vice President Frans Timmermans.

Timmermans said that utensils would not be banned completely, but steps would be taken to have them made out of sustainable materials when possible.

"You can still organize a pick-nick, drink a cocktail and clean your ears just like before," Timmermans said.

The commission wants to ban any single-use plastic item for which a non-plastic alternative is readily available. This covers cotton buds made with plastic, cutlery, plates, straws, drink stirrers and balloon sticks - but not balloons themselves.

Meanwhile, the use of items such as plastic takeaway food containers and cups should be reduced.

Plastic waste is a particular problem for the world's oceans, with its slow decomposition rate meaning that traces are often found in marine species such as sea turtles, whales and birds, as well as the seafood that ends up in the human food chain.

The EU's proposals would also oblige producers to help cover the costs of cleaning up items such as crisp packets, cigarette butts, drink containers, wet wipes and lightweight plastic bags.

"Every plastic fork that ends up on a beach is one too many," said Maria Krautzberger, the head of the German Environment Agency.

She called for more incentives to encourage multiple-use goods, while noting that some replacement products may have a worse environmental footprint than their plastic alternatives.

The World Wildlife Fund welcomed the initiative. "However, plastic in our ocean is a global issue that also demands a global solution," said Samantha Burgess of the environmental campaign group, calling on Europe to support similar efforts by the United Nations.

But green EU lawmaker Sven Giegold accused the commission of "paternalism," arguing that "straws should be improved rather than banned."

The PlasticsEurope industry group called on the commission to "avoid shortcuts," arguing in a statement that "plastic product bans are not the solution."

Plastic waste should be collected and used as a resource instead, the group said.

The proposed measures, which require the approval of EU governments and lawmakers, should avoid environmental damages worth 22 billion euros (25.6 billion dollars) by 2030 and save consumers a projected 6.5 billion euros, the commission has calculated.

The EU's executive has separately floated the idea of charging member states for throwing away recyclable plastic.

Research published in the online journal Scientific Reports estimates a garbage patch of some 79,000 metric tons - 1.8 trillion pieces - of plastic has formed in the Pacific Ocean, mainly consisting of fishing nets, plastic containers, packaging and ropes.

Earlier this year, Britain also said it planned to ban the sale of plastic straws and other single-use products.

And unlike so many EU proposals that are immediately criticized by consumer and environmental groups as too little too late, the reaction was largely positive on Monday.

"The only way to stop plastics pouring into our oceans is to turn off the flow at its source: production," said Lasse Gustavsson, the European executive director of the environmental group Oceana, as he lauded the initiative.

European Green Party lawmaker Monica Frassoni also welcomed the initiative and added that "the scale of the problem means that we cannot rely on individual European countries to take action and must instead find a Europe-wide response."

The European Parliament has said that plastics production is now 20 times higher than in 1960s. The EU has also been spurred into action by China's decision to no longer import part of the bloc's waste.

Share on Facebook Share on Twitter
Previous in Environment The Great Barrier Reef has survived five climate-related "death events"... Next in Environment In Albania, legend has it that staring into the almond-shaped eyes...
DAILY SABAH RECOMMENDS