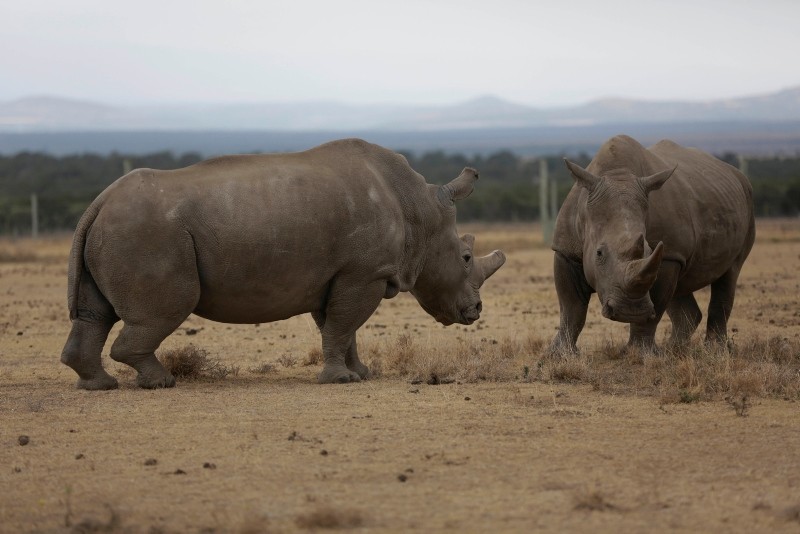 In this Friday, March 2, 2018 photo Fatu, left, and Najin, right, they only two female northern white rhinos left in the world, grace in the pen where they are kept for observation, at the Ol Pejeta Conservancy in Laikipia county in Kenya. (AP Photo)
by French Press Agency - AFP
Jul 04, 2018 12:00 am

Months after the death of Sudan, the world's last male northern white rhino, scientists said Wednesday they have grown embryos containing DNA of his kind, hoping to save the subspecies from extinction.

With only two northern white rhino (NWR) known to be alive today — both infertile females — the team hopes their breakthrough technique will lead to the re-establishment of a viable NWR breeding population.

"Our goal is to have in three years the first NWR calf born," Thomas Hildebrandt, head of reproduction management at the Leibniz Institute for Zoo and Wildlife Research in Berlin, told journalists of the work.

"Taking into account 16 months (of) pregnancy, we have a little more than a year to have a successful implantation."

Now frozen, these "have a very high chance to establish a pregnancy once implanted into a surrogate mother," said Hildebrandt.

The hybrid embryos were created with frozen sperm from dead NWR males and the eggs of southern white rhino (SWR) females, of which there are thousands left on Earth.

The eggs were harvested from rhinos in European zoos.

The team now hopes to use the technique to collect eggs from the last two northern white rhinos — Najin and Fatu, the daughter and granddaughter of Sudan. They live in a Kenyan national park.

By fertilizing these with northern white rhino sperm and implanting the resulting embryos in surrogate southern white rhino females, the team intends to create a new, fledgling NWR population.

"Our results indicate that ART (assisted reproduction techniques) could be a viable strategy to rescue genes from the iconic, almost extinct, northern white rhinoceros," the team wrote in the journal Nature Communications.

The researchers have sought permission to harvest eggs from Najin and Fatu in Kenya, hopefully before the end of the year.

But the procedure is not without risk: "we have to do a full anesthesia, the animal is down for two hours, and it is quite a risky situation" for the last two of their kind, conceded Hildebrandt.

"We are highly afraid something unexpected would happen, that would be a nightmare."

In the meantime, the team will practice, implanting some of their hybrid embryos into SWR surrogates "to test the system".

Any hybrids born as a result may play a crucial future role as surrogates, sharing more genes with northern rhinos than purely southern surrogates.

There is, however, a key obstacle to the team's envisaged NWR repopulation.

With only two NWR females left and all the available semen from only four dead males, ART alone would likely lead to a population without the genetic diversity required for a species to thrive.

To this end, the researchers hope to use stem cell technology to engineer eggs and sperm from the frozen skin cells of 12 dead northern white rhinos, unrelated to one another.

"This would enlarge the founding diversity of the future NWR population substantially," the team said in a statement.

There is time pressure, they pointed out, with only two animals still around to socialize the babies in the mysterious ways of northern white rhinos.

"It is a motivating aspect to succeed as soon a possible so the calf that we produce can grow up with Najin and Fatu," said Hildebrandt.

Terri Roth and William Swanson of the Cincinnati Zoo and Botanical Garden, in a comment on the study, said ART alone cannot save a species from extinction.

"Impressive results in a Petri dish don't easily translate into a herd of healthy offspring," wrote the duo, not involved in the research.

"Achieving the latter requires navigating an untrodden path fraught with obstacles, and it remains unlikely that a viable population of northern white rhinos will be restored."

For the researchers, however, a combination of ART and stem cell techniques, could "provide a blueprint on how to save highly endangered species that have already dwindled to numbers that make conventional conservation efforts impossible."