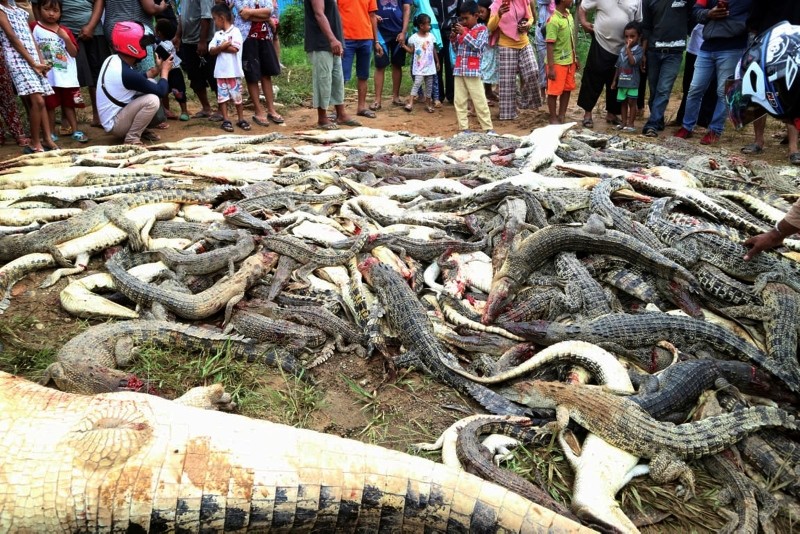 In this Saturday, July 14, 2018, photo, people look at the carcasses of crocodiles slaughtered by villagers in Sorong, West Papua, Indonesia. (AP Photo/Irianti)
by Compiled from Wire Services
Jul 17, 2018 12:00 am

A mob slaughtered nearly 300 crocodiles at a breeding ground in Indonesia's West Papua province in retaliation for the death of a local man, officials said Monday.

A total of 292 crocodiles were killed by hundreds of villagers on Saturday following the funeral of a 48-year-old man who was killed by crocodiles after entering the area around the breeding pond, said Basar Manullang, the head of the local Natural Resources and Conservation Agency.

The man was believed to have entered the sanctuary in the Klamalu neighborhood of Sorong district to cut grass for his cattle.

"One of the crocodile farm employees... heard someone screaming for help and ran to the scene where they saw a person being mauled by a crocodile," Manullang said.

The man's family and "hundreds" of other locals, angry over the farm's location near a residential area, marched to the police station where they were told the breeder would pay compensation, he added, but the crowd was not satisfied with their answer and went on to raid the farm.

Images from the scene showed dozens of dead crocodiles lying on top of each other and covered in blood after the attack.

Indonesian authorities have burned the carcasses of crocodiles, a government official said on Tuesday.

"The dead crocodiles have been burned and buried around the farming area," Manullang said in a text message.

Photos showed the crocodiles had been placed in a large pit in the ground, along with wood for kindling, and set alight.

The agency said in a statement that the villagers were armed with machetes, hammers, shovels and other sharp weapons. They killed two large crocodiles of up to 4 meters (13 feet) and many babies measuring 50-150 centimeters (20-60 inches).

"Since killing the crocodiles is illegal, we are coordinating with the police for the investigation," Manullang said.

The crowd could be charged with destruction of property, which carries a maximum penalty of five years in prison, and violating the law on animal conservation, Sorong police detective chief Sarifur Rahman told CNN Indonesia.

Witnesses said about 40 policemen came to the scene but were too outnumbered to stop the mob.

Police said about five witnesses have been questioned but no suspects have been named.

Police are encouraging mediation between the victim's family and Mitra Lestari Abadi, the company that operates the sanctuary.

Manullang said the farm had been given a license to breed protected saltwater and New Guinea crocodiles in 2013 for preservation and also to harvest some of the animals.

The eastern area of Papua has a special dispensation that allows some of the crocodiles to be exploited for skin, spawning a retail industry in items from belts to bags and shoes made from the skin of the reptiles. Muhammad Nur, who owns the Crocodile Craft Centre based in the Papuan port of Merauke, said the conservation agency only allowed medium-sized crocodiles to be used.

The bloody incident highlighted the dangers of trespassing into a breeding farm and also raised concerns about its safety.

"They have to make sure that the farm has good barriers and they need to step up security with CCTV and security signs to warn people" of the dangers, said Dwi Nugroho Adhiasto, program manager at the World Conservation Society's Indonesia office.

The Southeast Asian archipelago is home to a vast array of wildlife, including several species of crocodile that regularly attack and kill humans.

In March authorities in Borneo shot and killed a six-meter long crocodile after it ate a local palm plantation worker.

Two years ago, a Russian tourist was killed by a crocodile in the Raja Ampat islands, a popular diving site in Indonesia's east.