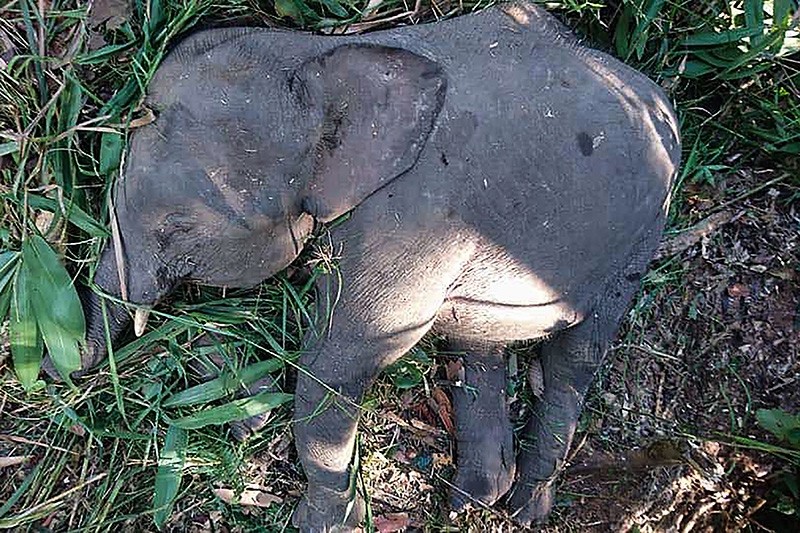 A pygmy elephant was shot dead in Malaysia after it destroyed villagers' crops, making it the third dead elephant to be found in the last eight days in the northern Borneo territory.

The male elephant, believed to be about 4 years old, was found Monday by the side of a road in the state of Sabah, on the Malaysian part of Borneo, local wildlife department director Augustine Tuuga told AFP.

He said the "merciless" killing was carried out near a remote settlement, and authorities were investigating who was responsible.

"(The elephant) was killed out of revenge for destroying crops," he said, adding the crops included palm oil trees.

He said the creature's tusks remained intact, indicating the elephant was not killed by poachers seeking to sell its ivory on the black market.

Wildlife official Siti Nur'Ain Ampuan Acheh said in a statement: "From the position of the injury and the trajectory of the pellet, it is highly probable that the elephant was shot from close range from an elevated place or from the back of a vehicle."

The Sabah Wildlife Department pledged to investigate the killing and find those responsible.

The discovery came after another male elephant was found dead on July 19 from a severely cracked left skull. That animal was suspected of having been involved in a bullfight with a larger elephant.

Another male elephant was found dead on July 16 on an oil palm plantation with a badly mangled foot, believed to be the victim of a snare trap.

Elephants in Sabah are a Totally Protected species under the Sabah Wildlife Conservation Enactment 1997, but widespread tropical deforestation and logging for oil palm plantations have placed them under increasing threat.

Malaysia is home to vast tracts of rainforest and a kaleidoscope of exotic wildlife, from elephants to orangutans and tigers, but the numbers of many rare species have fallen dramatically in recent decades.

As well as human-animal conflict, many endangered animals are hunted for their body parts which fetch a high price for use in traditional medicine in China, and elsewhere in Asia.

At least 18 pygmy elephants have been killed in Malaysian Borneo since April, The Star newspaper reported. Causes of death included elephants being targeted by poachers and poisoning.

Pygmy elephants are baby-faced with large ears, plump bellies and long tails that sometimes drag on the ground, according to environmental group WWF.

Rainforest-clad Borneo is the world's third-largest island and is shared between Malaysia, Indonesia and Brunei.