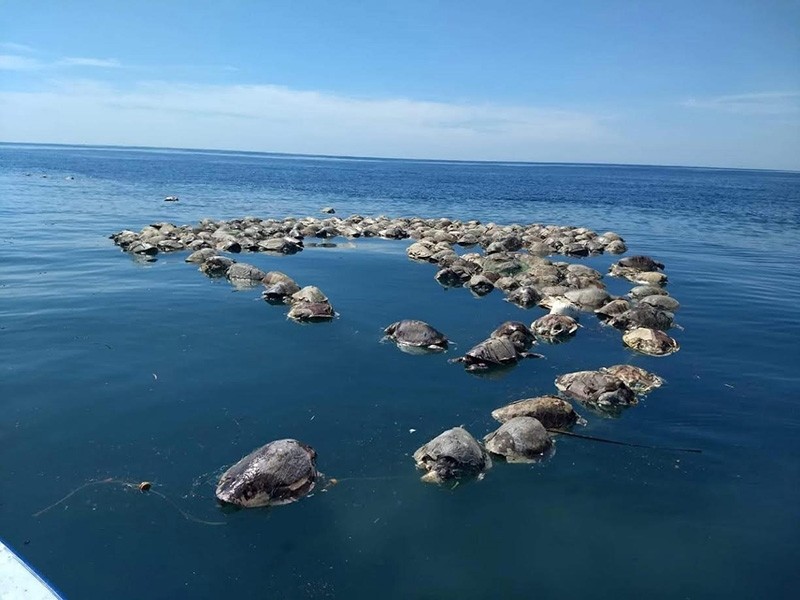 About 300 endangered sea turtles were found dead off the southern coast of Mexico on Tuesday, trapped in a long fishing net, shortly after more than 100 dead turtles were recovered.

Fishermen in the southern state of Oaxaca discovered the turtles in the seaside community of Barra de Colotepec, said Heliodoro Diaz, the coordinator of the state's civil protection agency.

The office for environmental protection says the Olive Ridley turtles drowned after getting caught in the net.

The office said in a statement Tuesday that the endangered turtles were badly decomposed when found in the water near Puerto Escondido, Oaxaca. They had been dead for about eight days when local residents reported them.

They had been trapped in a 393-foot (120-meter) long net that is not approved for fishing.

The turtles were buried on the beach, and officials are investigating who set the net.

The Olive Ridley turtles, which Mexican authorities say are at risk of extinction, measure about 75 centimeters (29.5 inches) in length and weigh some 45 kilograms (99 pounds). From May to September, they descend on various Mexican states along the Pacific Ocean to lay their eggs.

Mexico, which is home to six of the world's seven species of sea turtles, has a permanent program to protect the reptiles, including criminal penalties for those who kill them. The office of the federal attorney for environmental protection (PROFEPA) said it would investigate the case.

Earlier this month, authorities said they were investigating the deaths of 113 sea turtles at risk of extinction – 102 Olive Ridley turtles, six hawksbills, and five belonging to the green turtle species – in a sanctuary in the southern state of Chiapas.

Experts said asphyxiation, fish hooks or harmful algae could have killed the turtles, but the cause is still being investigated, PROFEPA said.