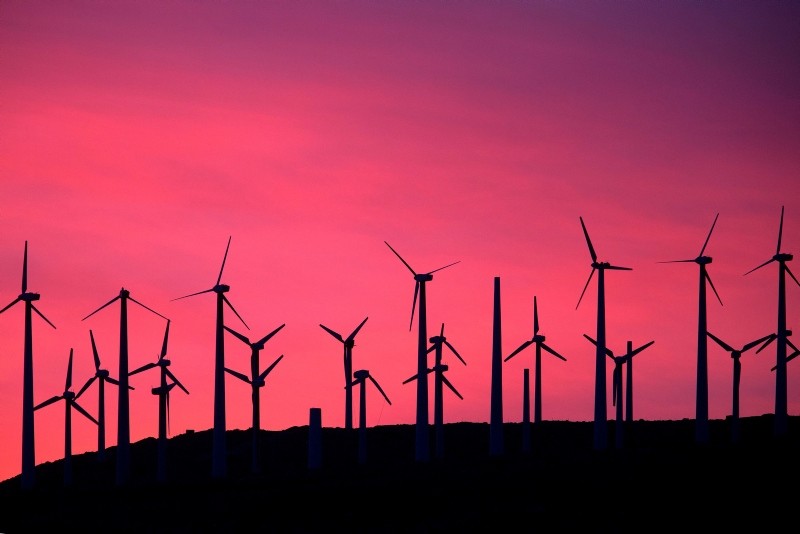 In this file photo taken on April 22, 2016 Electric energy generating wind turbines are seen on a wind farm in the San Gorgonio Pass area on Earth Day near Palm Springs, California. (AFP Photo)
by Oct 05, 2018 12:00 am

Wind turbines, designed as an alternative to fossil fuels, still contribute to climate change due to the way they redistribute heat and moisture in the atmosphere, according to a study published Thursday.

Researchers from Harvard University found that powering the entire United States with wind energy would cause a 0.54 degree Celsius ground temperature rise in the area where the turbines were located, and a 0.24C increase across the continental United States.

"Wind beats coal by any environmental measure, but that doesn't mean that its impacts are negligible," said David Keith, an engineering and public policy professor and senior author of the study, published in Joule.

By comparison, the average global temperature has risen by approximately one degree since the end of the 19th century.

The Paris climate accord, meanwhile, calls upon countries to limit temperature increases to between 1.5C to 2C to avoid serious environmental consequences.

Previous studies have also examined the impact of wind turbines on climate change. One recent study, published in the journal Science, concluded that covering an area of the Sahara desert with wind turbines would affect local temperature, rainfall, and in turn, vegetation.

The Harvard researchers said that installing solar panels would have an impact around 10 times smaller than wind turbines for the same energy generation rate.

"The direct climate impacts of wind power are instant, while the benefits accumulate slowly," Keith said.