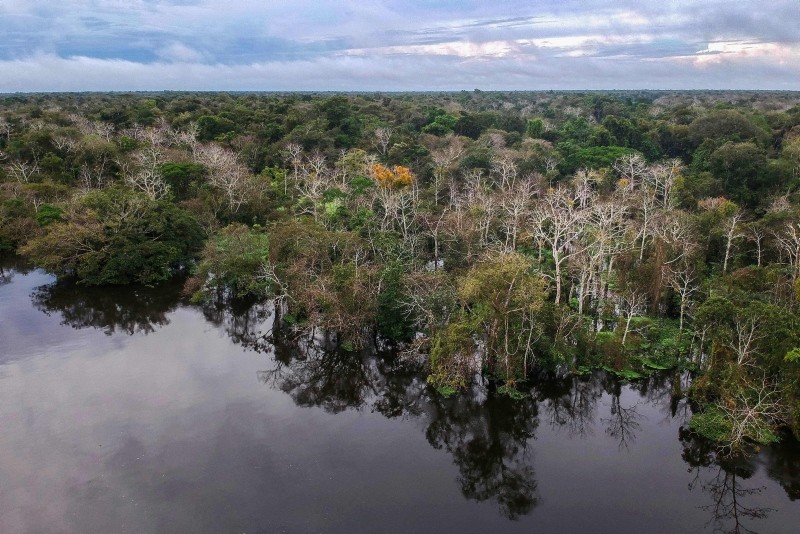 They form vital refuges for thousands of endangered species threatened by deforestation and overfishing, and provide some of our best defenses against the devastating weather events brought about by climate change.

New research published in the journal Nature found that nearly three quarters of the wilderness that's left belongs to Australia, Brazil, Canada, Russia, and the U.S.

"For the first time we've mapped both land and marine wilderness and showed that there's actually not much left," James Watson, professor of conservation science at the University of Queensland and lead paper author, told French Press Agency (AFP).

"A few countries own a lot of this untouched land and they have a massive responsibility to keep the last of the wild."

For oceans, they used data on fishing, industrial shipping and fertilizer run-off to determine that just 13 percent of the planet's seas bore little or no hallmarks of human activity.

In a week when scientists warned that animals were being driven to the brink of extinction by runaway consumption, the paper's findings that most remaining wilderness lies with just five nations will likely set conservationists' nerves on further edge.

Russia's vast swathes of taiga forest and permafrost contains trillions of trees that suck carbon from the atmosphere, tempering the impact of greenhouse gas emissions.

But Russia has been vague in its conservation commitments and President Vladimir Putin suggested last year that climate change was not caused by humans. 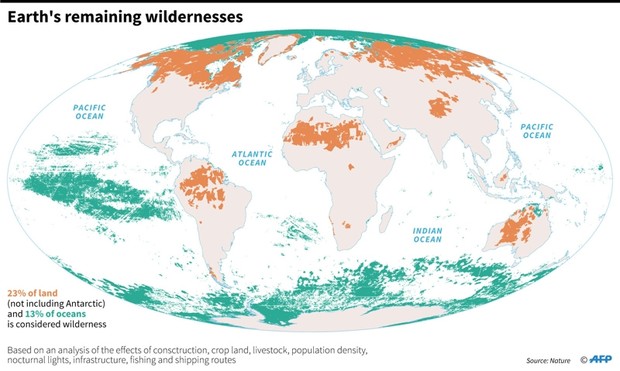 President Donald Trump has said the U.S. is leaving the landmark Paris deal on climate change, and Brazil this week elected a right-wing former army captain who has pledged to drawdown existing legal protections for the Amazon rain forest.

The wilderness list sets off "alarm bells", said Watson, who is also director of the science and research initiative at the Wildlife Conservation Society in New York.

But "there's time to break the mold and show some leadership. Because to sustain wilderness you just have to stop industry and not allow people in," he added.

Due to voracious human consumption of fossil fuels, wood and meat, as well as our exploding population, just 23 percent of land on Earth is untouched by the impact of agriculture and industry.

A century ago that figure stood at 85 percent.

Between 1993 and 2009, an area of wilderness the size of India was lost to human settlement, farming and mining.

The conservation group World Wide Fund for Nature (WWF) warned this week that mankind's consumption had decimated global wildlife and triggered what is known as a mass-extinction event.

In the last 40 years populations of fish, birds, amphibians reptiles and mammals have plummeted, on average, by 60 percent.

In their paper, Watson and his colleagues warned that Earth's wild places were facing "the same extinction crisis as species."

"Similar to species extinction, the erosion of the wilderness is essentially irreversible," they wrote.

As well as being havens for biodiversity, wildernesses such as the boreal forest in northern Canada — which acts as a carbon sink and which is protected by federal law — form mankind's frontline protection against runaway climate change.

"These areas are the places where many, many species retreat to," said Watson. "At the same time they have massive amounts of carbon reserves."

Scientists called for greater legislation to protect other unspoilt areas from industry, and to reformat global finance initiatives to provide incentives for forest protection.

"It requires nations to legislate and not let industry in. Nature needs a break," said Watson.

"We can't just exploit everywhere and these nations still have these strongholds of wilderness. I think the world would appreciate these nations standing up and saying we're going to look after these places."