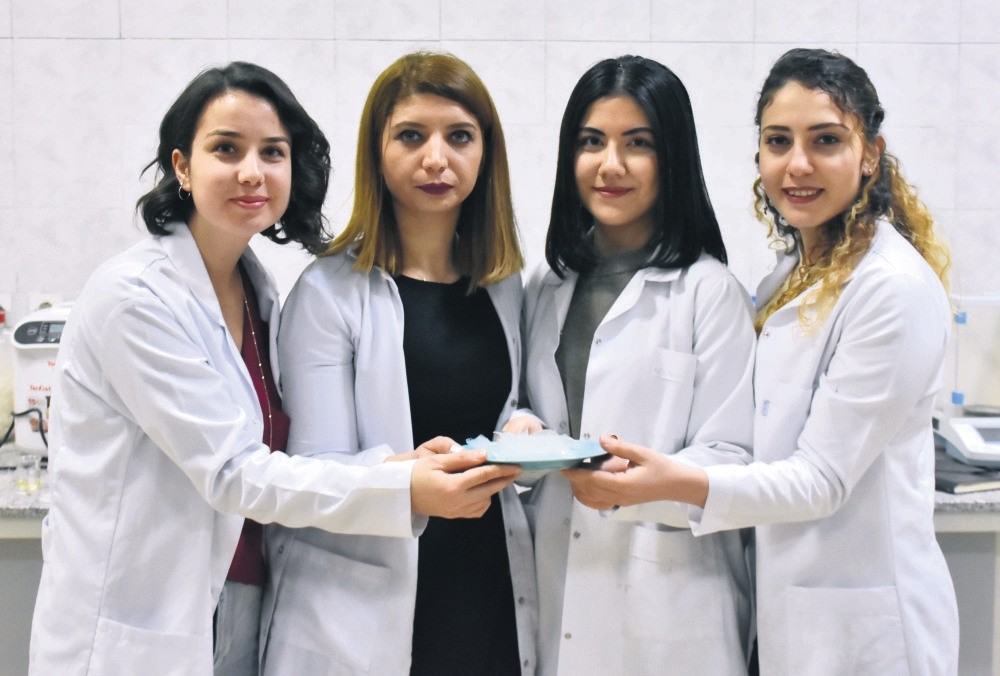 To support the Zero Waste Project, seniors Melis Öcal, Güneş Zübarioğlu and Pınar Altaş and postgraduate student Hatice Yaprak launched a study about three months ago on biodegradable film that is both edible and dissoluble without causing any residue in nature.

Students have produced biodegradable films from starch and foodstuffs in large quantities, aiming to contribute to both the economy and the environment.

Speaking to Anadolu Agency (AA), Hatice Yaprak said that various studies are carried out for zero waste projects in Turkey and the world. She stated that they want to make a contribution to these studies.

Touching on the contribution of the production of food-based edible plastics to the environment and economy, Yaprak said, "Our aim is to contribute to the economy, to produce new products at low cost and to be environment-friendly. The edible plastics we have produced are dissolved and lost in nature and can be recycled again."

Yaprak noted that plastics made of petrol pollute the environment and harm living creatures, emphasizing that it is hard to eliminate their harmful effects.

She underlined that they are trying to produce food-based edible plastics in order to bring a solution to this problem and start domestic production. "We want to contribute to the national economy with environment-friendly and low-cost edible plastics. We aim to use it in packaging and other areas. So, people can live in a healthier environment. It will not harm a person when it is eaten as it is completely food-based. For example, packaged bread can be eaten with the plastic around it. Our product is starch-based."

Explaining that plastic materials are harmful to children in particular, Yaprak said, "Children usually take plastics into their mouths. The plastics we have produced can also be used in the food industry."

Yaprak also stated that the cost of the biodegradable films they produce is high for now, continuing that they want to contribute to the national economy by minimizing it.

Melis Öcal highlighted that the plastics they have produced can be dissolved in nature.

Gaziantep University Food Engineering Department professor Ali Rıza Tekin explained that the environment-friendly film made from starch has been developed by students.

Stressing that they are doing their best to support them, Tekin said, "Within the scope of the Zero Waste Project, we support starch-based edible films that are being developed by our students. I think that the production of starch-based edible films, which are produced through waste utilization and one of the research and development issues needed to be addressed by our country, will contribute to our economic development."