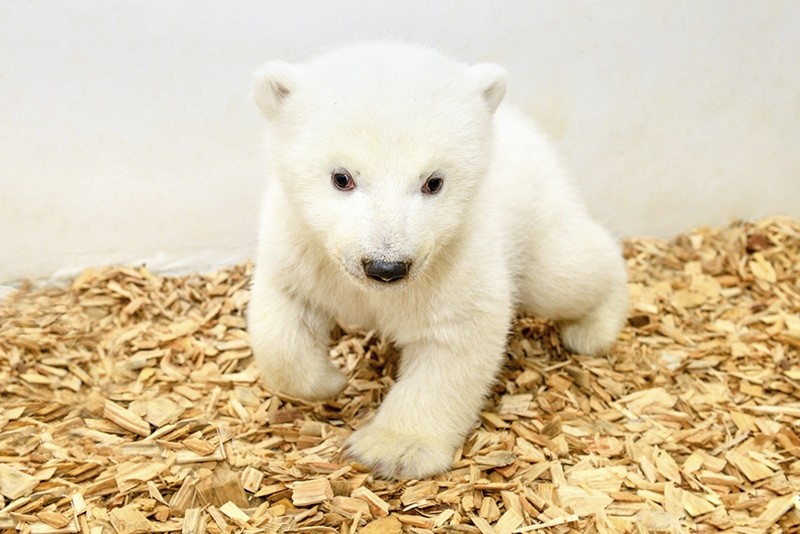 A little female polar bear watches the camera after its first examination by the animal doctors at the zoo in Berlin, Germany, Thursday, Feb. 14, 2019. (Berlin Tierpark Zoo via AP)
by Daily Sabah with Agencies Feb 15, 2019 8:23 pm

It has been almost two years since Berliners had a baby polar bear to coo over, after the death Fritz at just 4 months of age in 2017 — now they have a newborn girl to dote on.

The city's Tierpark Zoo published a video on Friday of a baby female polar bear - looking just like a cuddly toy - making heart-melting cries as vets paid her a first visit.

She made her first leaps toward the zookeepers, zoo director Andreas Knieriem told dpa on Thursday after he had made his first visit to her enclosure.

She may be a predator, but "of course she did not know what these little green men suddenly there were," Knieriem said.

The vets' examination with vaccination and worming also showed that at about 8.5 kilograms (18.7 pounds) and 60 centimeters (24 inches) long, the little one born on Dec. 1 is already "perky" and "strong." 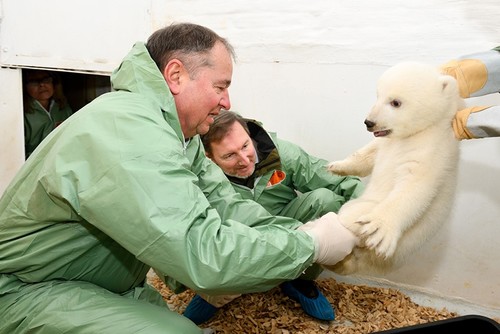 She will be able to follow her mother Tonja, 9, to the outside area in mid-March, according to the director.

Tonja's last two cubs died within months of birth and keepers caution that the mortality rate for young polar bears can be quite high. At birth, polar bears are only as big as a guinea pig, and are blind and deaf.

Her last cub Fritz died surprisingly in 2017 at the age of 4 months as a result of liver disease.

The Tierpark could use a little polar bear girl as a star attraction. Located in the east of the city, it is overshadowed by Berlin Zoo in the city center, where baby polar bear Knut once caused a rush of visitors. Knut also had a tragic death at age 4 from a brain infection.