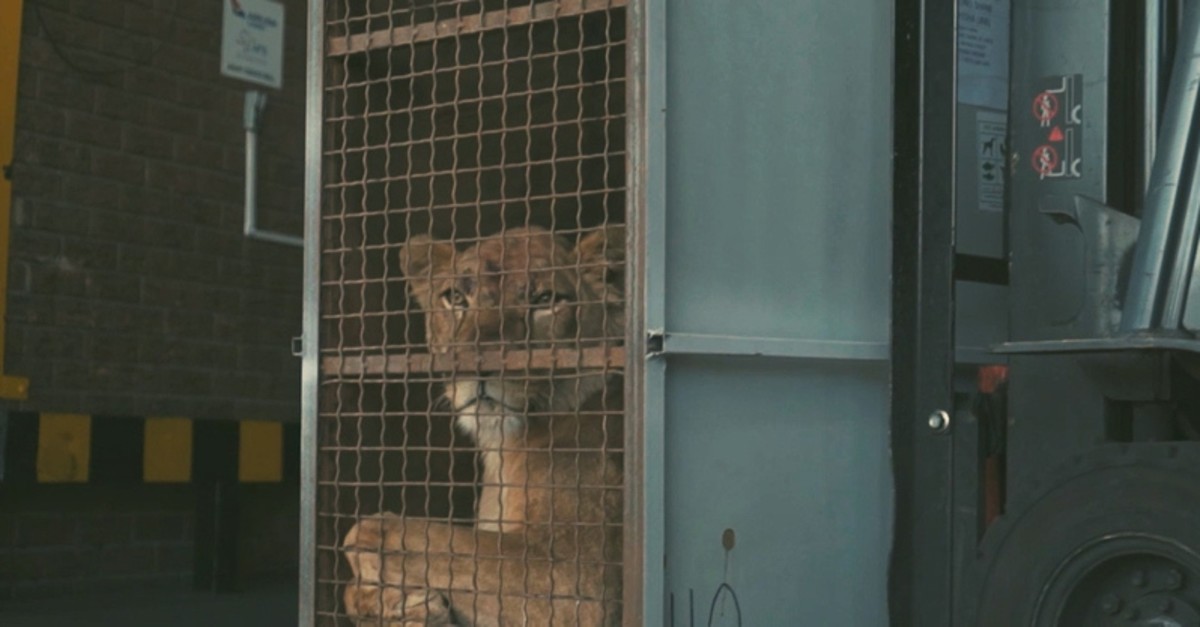 A transport cage with one of the lions moving towards the airplane loading area on a forklift. (AA Photo)
by Daily Sabah with AA Mar 03, 2019 2:29 pm

National flag carrier Turkish Airlines (THY)'s cargo company, Turkish Cargo, embarked on a rescue mission for three sister lions named Luca, Charlie and Kai and a boy cub named Nathan. The company relocated the lions to their natural habitat in South Africa, putting them on a flight from Kiev with a stopover in Istanbul.

Nathan and the three sisters were imprisoned in a 35-square-meter cement and steel cage in Kiev, thousand of miles away from their natural habitat. For many years, the sisters and the baby lion lived poor lives, deprived of direct sunlight and clean air, THY said in a statement released on March 3, World Wildlife Day.

The lions were saved by the Lawrence Anthony World Organization (LAEO), a group that champions animal rights. After their rescue, the lions were transferred to their habitat in South Korea, carried in containers specially designed for their food and care needs.

On their journey, Luca, Charlie, Kai and Nathan were accompanied by their keepers, special veterinarians and authorities from the LAEO and Turkish Cargo personnel certified in transporting live animals, the THY statement said.

The lions were initially alien to their own natural habitat due to the conditions in the circus where they lived in Ukraine.

"Having ratified the United For Wildlife Declaration in 2017 for the purpose of preventing illegal wildlife trade and increasing the industrial awareness thereto, Turkish Airlines has highlighted its cognizance of live animal transportation processes and animal rights," the company said.

Commenting on the rescue mission on his official Twitter account, THY Senior Vice President of Media Relations Yahya Üstün said: "We transported four lions rescued from a 35-square-meter circus room in Ukraine to their habitat in South Africa. Now it is their turn to enjoy and discover freedom. We will continue to be a protector of nature with the special operations of our Turkish cargo brand."