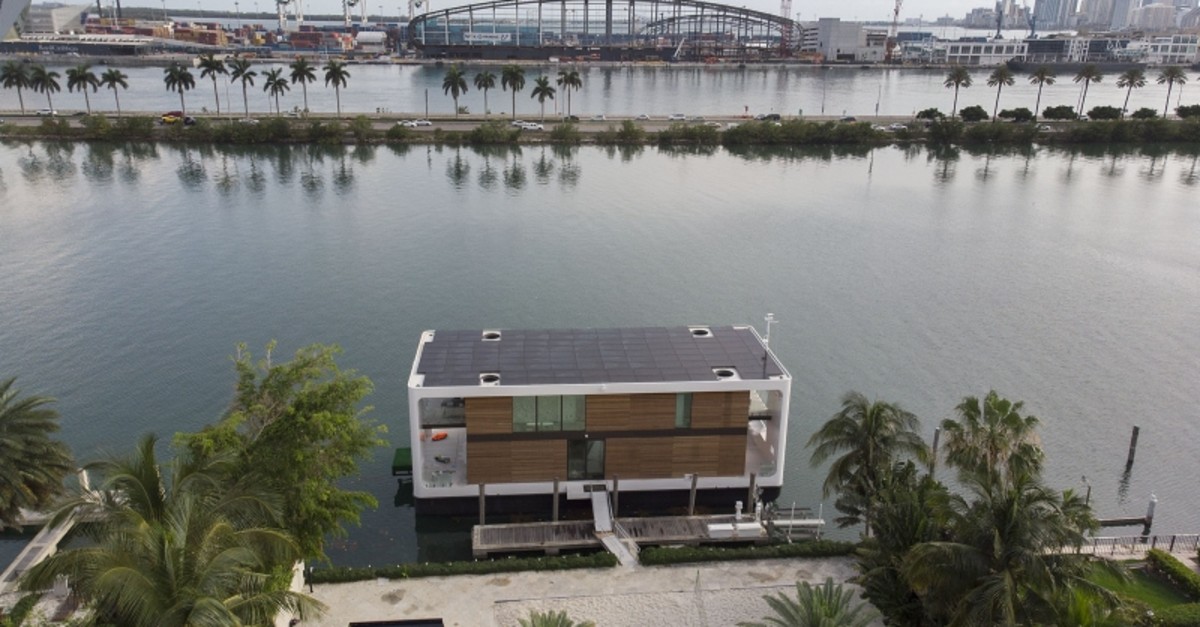 An aerial view from a drone shows the Arkup houseboat, a green-energy luxury floating home that can allow owners to adapt as the sea level continues to rise on May 14, 2019 (AFP Photo)
by May 21, 2019 3:12 pm

Global sea levels could rise by 2 meters (6.5 feet) and displace tens of millions of people by the end of the century, according to new projections that double the U.N.'s benchmark estimates.

The vast ice sheets of Greenland and Antarctica contain enough frozen water to lift the world's oceans dozens of meters. The expansion of water as oceans warm also contributes to sea level rise.

But predicting the rates at which they will melt as the planet heats is notoriously tricky.

The United Nations' Intergovernmental Panel on Climate Change (IPCC) said its 2013 Fifth Assessment Report that under current emissions trajectories -- a "business-as-usual" scenario known as RCP8.5 -- would likely rise by up to one meter by 2100.

That prediction has since been viewed as conservative, as the levels of planet-warming greenhouse gas emissions continue to rise year on year, and satellites showing accelerated rates of melt-off from massive ice sheets atop Antarctica and Greenland.

A group of the world's leading ice scientists this week released an expert judgment on the situation, drawing on their own experience and observations.

While there was still a significant margin of error, they found it "plausible" that under the business-as-usual emissions scenario, sea-level rises could exceed two meters by 2100.

The authors said the area of land lost to the ocean could be equivalent to that of France, Germany, Spain and Britain combined and would displace more than 180 million people.

"A sea-level rise of this magnitude would clearly have profound consequences for humanity," they said.

The Paris climate deal, struck between nations in 2015, aims to limit global temperature rises to well below two degrees Celsius (3.6 Fahrenheit), and encourages countries to work towards a 1.5C cap.

In October the IPCC released a landmark climate report that called for a drastic and immediate drawdown in coal, oil and gas consumption in order to arrest the rapid rise in the levels of greenhouse gases in the atmosphere.

That report, however, did not include revised estimates of sea level rise.

The authors of the new study, released Monday in the journal Proceedings of the National Academy of Sciences, argue that the IPCC's sea-level rise prediction was too constrained by focusing on what was "likely" to happen.

In world that has warmed by 5C -- unlikely but certainly not impossible given projected fossil fuel demand in the coming decades -- they calculated a five percent risk of sea levels surpassing two meters higher, topping out at 238 cm.

Willy Aspinall, from the University of Bristol's School of Earth Sciences, said he hoped the study could provide policymakers with a more accurate worst-case scenario "crucial for robust decision making."

"Limiting attention to the 'likely' range, as was the case in the IPCC Fifth Assessment Report, may be misleading and will likely lead to a poor evaluation of the true risks," he added.