Food and climate under threat if humanity does not change, UN report says 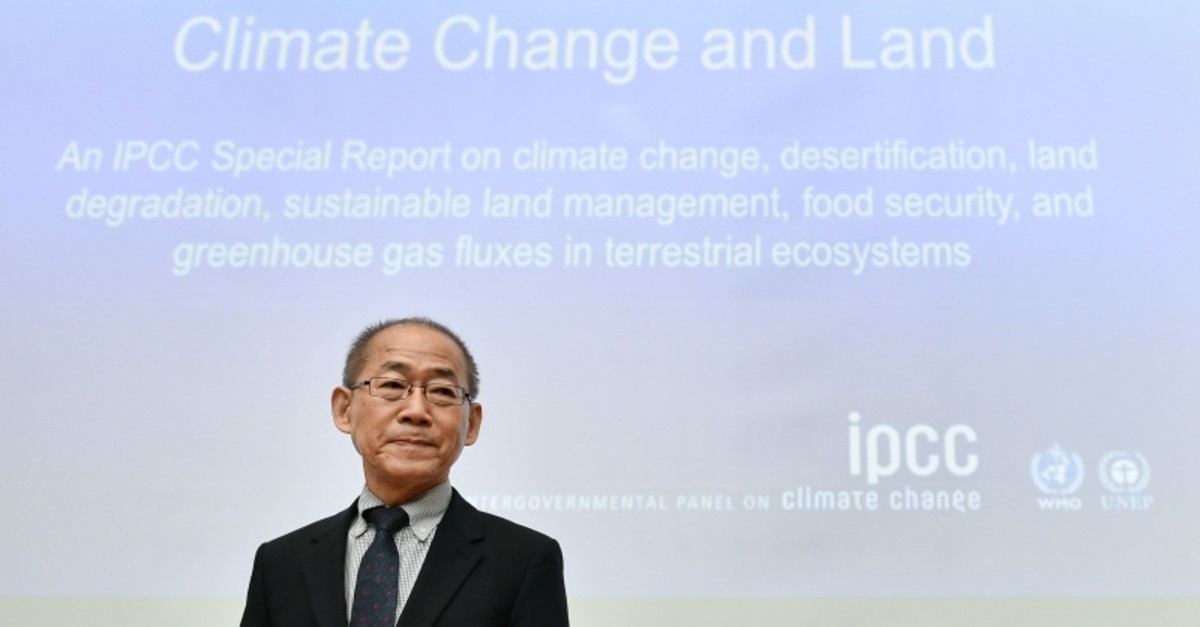 Intergovernmental Panel on Climate Change (IPCC) chairman Hoesung Lee looks arrives to a press conference on a special IPCC report on climate change and land on August 8, 2019 in Geneva (AFP Photo)
by Aug 08, 2019 11:41 am

The U.N.'s Intergovernmental Panel on Climate Change (IPCC) warned that efforts to limit global warming while feeding a booming population could be wrecked without swift and sweeping changes to how we use the land we live off.

Its report on land use and climate change highlighted the need to protect remaining tropical forests as a bulkhead against future warming.

But in a stark warning to those who may hope that vast reforestation and biofuel schemes alone can offset mankind's environmental damage, the report cautioned that these mega-projects could endanger food security, underlining that reducing emissions will be central to averting disaster.

"This is a perfect storm. Limited land, an expanding human population, and all wrapped in a suffocating blanket of climate emergency," said Dave Reay, Professor of Carbon Management at the University of Edinburgh.

Land is intimately linked to climate. With its forests, plants and soil it sucks up and stores around a third of all man-made emissions.

As the global population balloons toward 10 billion by midcentury, how land is managed by governments, industry and farmers will play a key role in limiting or accelerating the worst excesses of climate change.

The IPCC is the world's leading authority on climate change. Last year it warned that limiting global warming to 1.5C -- the optimal level aimed for in the Paris climate deal -- would be impossible without a drastic drawdown in greenhouse gas emissions.

The report emphasizes that any measure taken to stave off climate disaster while shoring up food supply cannot be taken without "rapid reductions" in emissions.

Any delay in this -- across industry, transport, agriculture and infrastructure -- "would lead to increasingly negative impacts on land and reduce the prospect of sustainable development," its summary said.

Forests, an enormous carbon sink, can be regenerated to cool the planet. But with industrial farming covering a third of land today, there's limited space.

Bioenergy in the form of vegetation used to sequester carbon also has potential. But room for that must be carved from crop land, pastures or existing forests.

The report said that a "limited" allocation of land for bioenergy schemes could indeed benefit the climate.

It warned however that deployment at a scale needed to draw down billions of tonnes of CO2 from the atmosphere each year "could increase risks for desertification, land degradation, food security and sustainable development."

Linda Schneider, senior program officer of International Climate Policy at the Heinrich Boll Foundation, told AFP the report left "no doubt about the devastating impacts large-scale bioenergy and afforestation would have on water availability, biodiversity, food security (and) livelihoods."

Its land use report takes a deep dive into the systems we use to feed ourselves, and the devastating impacts they are wreaking.

Not only does agriculture and its supply lines account for as much as 37 percent of all man-made emissions, but current industrialized production and global food chains also contribute to vast food inequality.

The report noted that while there are currently 2 billion overweight or obese adults, 820 million people still don't get enough calories.

In addition, a third of all food produced is currently either lost or wasted, adding to mankind's carbon footprint.

The IPCC summary paper mostly steered clear of the controversial call to limit meat consumption, but did burnish the credentials of "plant-based foods" and their ability to mitigate global emissions.

The report considers a quintet of human development projections, from a low-consumption global society that feeds itself sustainably, to a resource-intense future where arable land is squeezed out by huge-scale bioenergy projects.

"Very high risks related to permafrost degradation and food system instability are identified at 2C of global warming," she said.