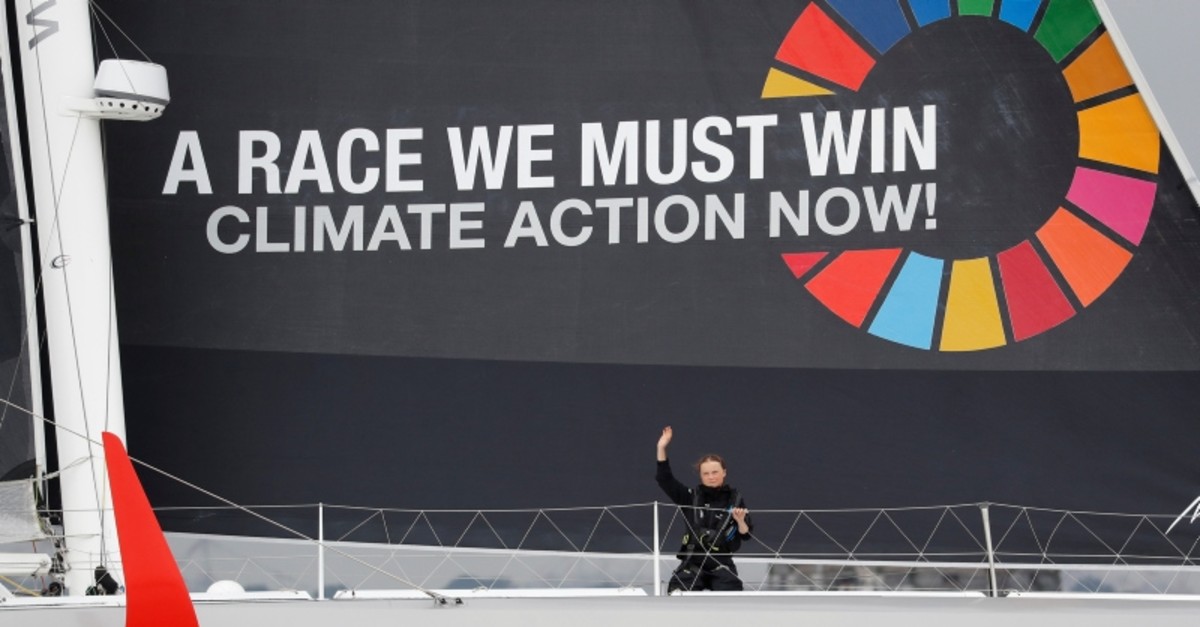 Swedish climate activist Greta Thunberg sailed into New York on Wednesday for a U.N. summit after a 15-day journey across the Atlantic in a zero-carbon yacht.

The 16-year-old was photographed waving at journalists and well-wishers as she neared the end of her 3,000-nautical-mile (5,550 kilometers) trip.

"Land!! The lights of Long Island and New York City ahead," she tweeted early Wednesday alongside a dark, blurry photo of lights in the distance.

Her yacht later anchored off the entertainment district of Coney Island in Brooklyn to clear customs and immigration.

Thunberg is expected to dock at North Cove Marina near the World Trade Center in Manhattan in the early afternoon, according to a spokesperson.

The United Nations sent a flotilla of 17 sailboats, one for each of their sustainable development goals for 2030, to meet her for the last short leg of her journey.

Thunberg will make brief remarks before answering questions from journalists, the spokesperson added.

She is sailing to New York to attend a U.N. summit on zero emissions next month after refusing to fly there because of the carbon emissions caused by planes.

The visit sees her bring her environmental message for the first time to the United States, led by climate change skeptic Donald Trump.

The yacht left Plymouth in southern England on Aug. 14, and the teenager marked the anniversary of the start of her school strike on Aug. 20.

Thunberg, who was diagnosed with Asperger syndrome at the age of 12, began sitting outside the Swedish parliament in August 2018 to get members of parliament to act on climate change.

She was quickly joined by other students around the world, as word of her strike spread through the media, and the "Fridays for future" movement was born.

The 18-meter yacht features state-of-the-art solar panels on its deck and sides, and two hydro-generators provide the vessel's electricity.

It can travel at speeds of around 35 knots (70 kilometers an hour).

The Swede has endured cramped and rudimentary conditions onboard, eating freeze-dried food and using a bucket as a toilet.

Thunberg said earlier in the week that she expected to arrive in New York on Tuesday but rough seas south of Nova Scotia slowed their progress.

The teenager has become a figurehead for climate action with her stark warnings of catastrophe if the world does not act now to cut carbon emissions and curb global warming.

She has also received criticism and abuse for her uncompromising attitude.

Her voyage sparked controversy after a spokesman for co-skipper Herrmann told Berlin newspaper TAZ that several people would fly into New York to help take the yacht back to Europe.

Hermann himself will also return by plane, according to the spokesman.

Team Malizia's manager insisted, however, that the young activist's journey would be climate neutral, as the flights would "be offset."

Thunberg has said that she does not yet know-how she will return to Europe.

Ahead of the U.N. summit on Sept. 23, Thunberg will take part in youth demonstrations, before heading to Canada, Mexico and then to Chile for another U.N. conference in December.