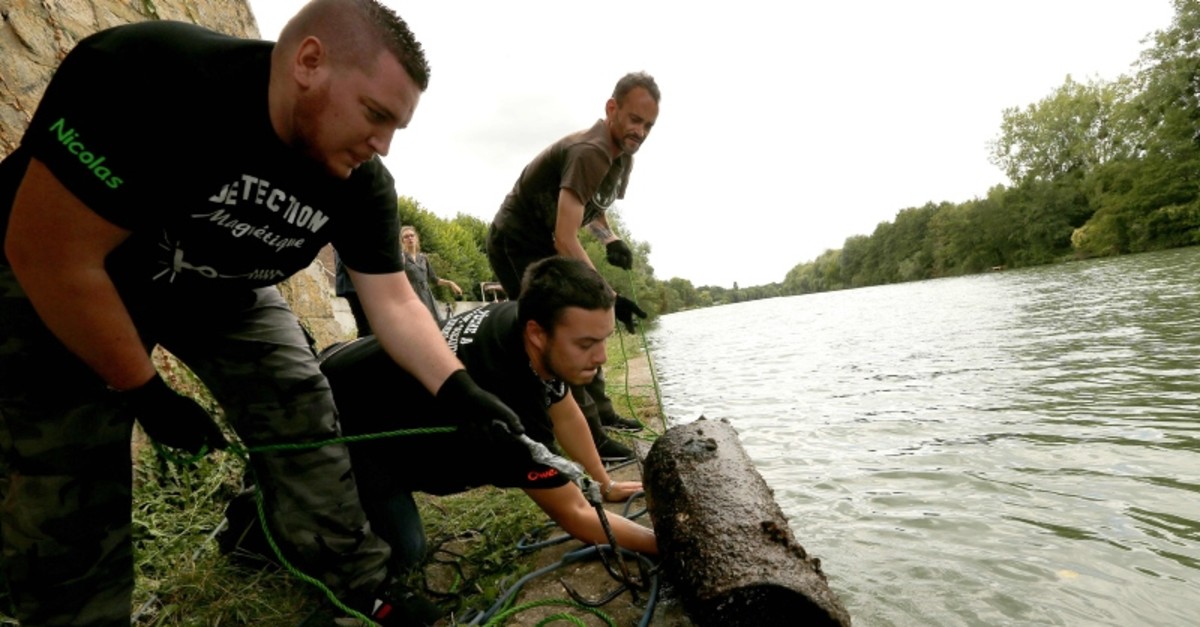 Fishermen remove scrap metal they caught with a ,super-powerful, neodyme magnet from the Oise river in Lacroix-Saint-Ouen, northern France, on August 16, 2019 (AFP Photo)
by Aug 31, 2019 1:41 pm

Sometimes, too, they fish other more unexpected objects out of the water, such as unexploded munitions.

Magnet fishing has fast become a popular pastime, according to public safety officials, but French authorities have clamped down over fears that historical battle sites could still harbor active weapons.

As in other countries, participants in France tie a super magnet to a rope and drop it into waterways, partly for treasure hunting, partly for environmental reasons.

On the banks of the Oise river, in a town about 75 kilometers (47 miles) north of Paris, Owen Gressier, 20, and his three fellow magnet fishermen cast their neodymium magnets.

After several attempts at their spot near a bridge in La Croix-Saint-Ouen, they latch onto something.

It takes a few minutes to haul out the item with the help of a grappling hook.

A rusty, cast-iron pipe emerges: "Nice catch," they say. It's the best find that afternoon.

"We've been fishing here for a number of years, the bottom (of the river) is pretty clean," Gressier, a forklift truck operator, says.

Driven by what he calls his passion for World War II and a quest to find medals, military gear and other historical objects, Gressier says that he also "quickly realized that it was possible to clean up the waterways".

In 2017, he set up a Facebook page, which now has more than 500 subscribers, where members share photos, advice and organize outings.

"It's crazy everything you can find in the water," Gressier says, listing anything from electric scooters to traffic signs and microwaves.

"With a dozen people, you can sometimes pull out 50 kilos (around 110 pounds) of scrap metal in a few hours," he adds.

In the neighboring Somme department, site of one of the largest battles of World War I, Christophe Devarenne started magnet fishing three months ago.

He says the thrill comes from "not knowing what will be at the end of the magnet".

But the 52-year-old driver warns that "if you expect to find treasures, there are not many".

"Even the Museum of the Great War did not want it," he jokes, adding that nothing goes to waste as it is resold or given to scrap merchants.

In other French regions too, where bloody battles were fought during both world wars, magnet fishing enthusiasts have discovered shells, ammunition and grenades.

And they can still be active, warns the national public safety authority.

Faced with the hobby's rising popularity in the last nearly two years, including under the Pont des Arts pedestrian bridge in central Paris, the authority has recently made police across France aware of the dangers.

In May, a man was seriously injured after pulling out a shell that emitted mustard gas, in the Nord region, home to the town of Dunkirk.

Two young magnet fishers in the Somme at the end of July also hauled out a phosphorus grenade, which irritated their eyes, police said.

The pastime is now illegal in France without a permit issued by the state or landowners.

"We were not aware of the risks... until my son found a grenade," says Helene Ledien, who lives in the Somme.

She said that her 14-year-old son Arthur bought a magnet for about 30 euros ($33) on Amazon and regularly fishes with his friend for environmental reasons.

Gressier said that his group had hauled out one active shell and hundreds of rusty weapons but knows what to do in that case.

"We establish a security perimeter and we warn the disposal experts," he adds.

Despite the warnings, his group says it won't stop the activity that has got them hooked.

"It's a passion, good for the planet, we will not stop overnight," says his 26-year-old friend Nicolas, who declined to give his full name.

"People will play cat and mouse," Devarenne chimes in.

"Nobody is really afraid, because the police have better things to do than chase after magnets," he adds.