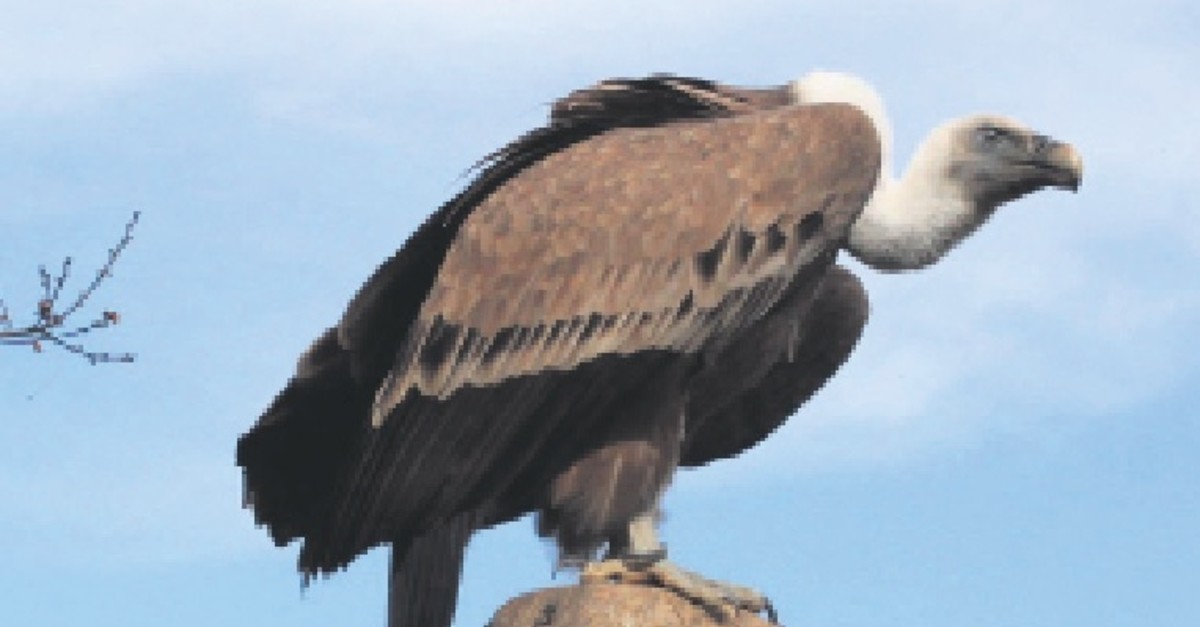 Vultures prevent the spread of epidemics by eating animals that have died of infectious diseases.
by Anadolu Agency Sep 09, 2019 1:07 am

Despite enduring rumors and a bad reputation, vultures play an important role in the environment, said the director of a conservation organization.

"They play a crucial role in the natural habitats – as scavengers – they clean our countryside of dead animals and carcasses, thus helping maintaining a level of certain hygiene," Dr. Jose Tavares, the head of Vulture Conservation Foundation told Anadolu Agency (AA).

Speaking about International Vulture Awareness Day, celebrated annually on the first Saturday of September, he said vultures are the "garbage men of nature" because they eat dead animals and clean the environment.

But while these birds provide a key ecosystem service, they are often victims of illegal traps and electrocution.

"Using poison bait to control wildlife is illegal all over the world, but it is a method that is unfortunately still used to resolve human-wildlife conflicts, and that kills vultures and the secondary, unintended victims," he said.

Although vultures are affected negatively by climate change, increasing the number of African vultures in Europe due to the global warming can be seen as positive result, claims Tavares, who is an expert in ornithology. "There are 23 species of vultures worldwide, both in Europe-Africa-Asia (the "old world" vultures) and in the Americas. Vultures in the Americas are of a different type or family from the ones in the old world," he said, adding that American vultures find food by smell, while old world vultures use sight to find their food.

Referring to the danger of extinction, he highlighted that only Egyptian vultures are endangered species on the red list of the International Union for Conservation of Nature (IUCN).

He said the Vulture Conservation Foundation, Europe´s leading organization in this field, organizes technical meetings on vultures and they will hold Europe´s first Vulture Conference in Portugal where more than 200 experts and scientists will attend in October.

"Vultures prevent many epidemics from spreading. They prevent the spread of these diseases by eating animals that have died of infectious diseases," Ahmet Emin Kutukcu, a wildlife expert from the World Wildlife Foundation (WWF) Turkey told AA.

Because of the decrease in vulture population, rabies has increased in India, for example.

"Since they play a role in the prevention of infectious diseases, they also contribute to a kind of economy by preventing the loss of money for the treatment of these diseases," he said, adding that vultures are beneficial to humans, animals and the environment.

Touching on the other threats vultures face, he said some superstitions such as eating vulture meat is healthy and lack of large herds, as in Africa, are also dangerous for their population.

Despite Tavares' claim that increasing vulture population in Europe can be seen as a positive result of climate change, Kutukcu thought it actually has a negative effect.

"Bearded vultures, one of the vulture species known to live in the highlands, die due to the extreme temperature rise that restrains their habitats."

On the vulture species that live in Turkey, he said that griffon, bearded, Egyptian and cinereous vultures are the four species present in the country.

Kutukcu added that the Egyptian species – which is the only endangered species – are seen in Africa during summer and migrate to Turkey in winter to breed and feed, and live in much larger areas such as the giant garbage dump in the Beypazari district of Ankara.

To prevent these raptors' deaths, Kutukcu suggested that pain relievers that are used in treatments should be non-toxic, poisons released to nature should be controlled and penalties should be applied in this regard.

Most important of all, he added, vulture habitats should be protected.

The WWF was established in 1961 as an international fundraising organization, to work in collaboration with existing conservation groups and bring substantial financial support to the conservation movement internationally.