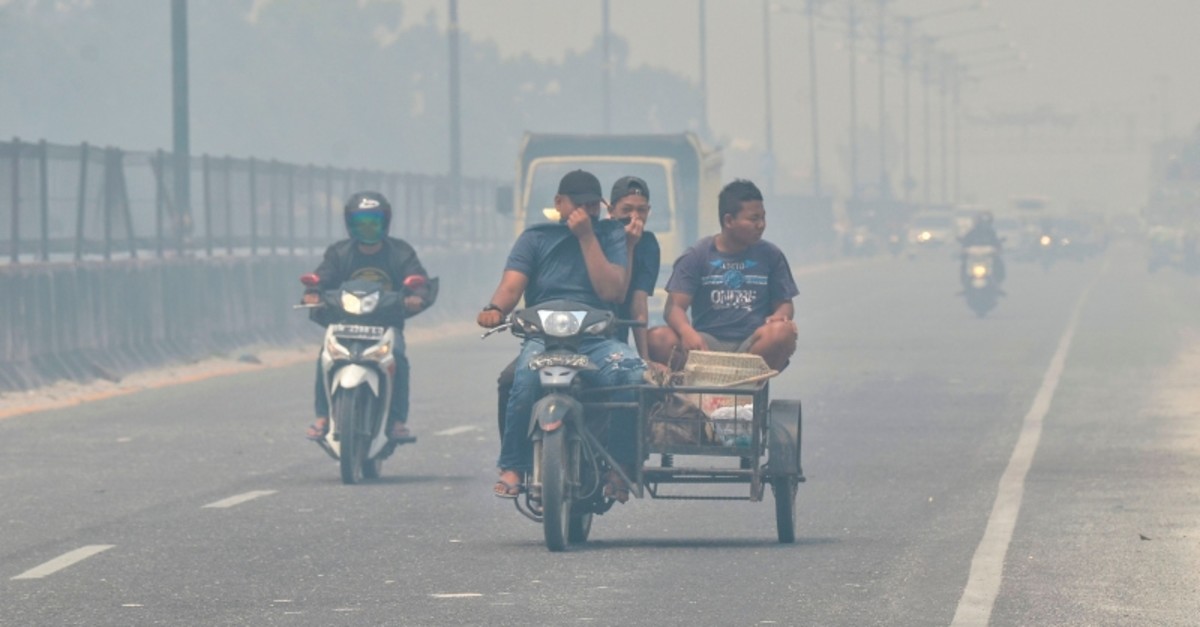 Indonesia is battling forest fires causing toxic haze across southeast Asia with aircraft, artificial rain and even prayer, President Joko Widodo said during a visit to a hard-hit area Tuesday.

Forest fires are raging on the islands of Borneo and Sumatra, sending a choking fug across the region -- including towards neighbors Malaysia and Singapore.

Widodo told reporters Tuesday in Riau province in central Sumatra that about 5,600 additional military personnel have been deployed to help the 9,000 people currently fighting the fires, which have razed more than 328,700 hectares (812,000 acres) of land nationwide.

He said at least 52 helicopters have dropped more than 263 million liters (69.5 million gallons) of water and 164 tons of salt for cloud seeding as part of the firefighting efforts in six provinces that have declared states of emergency. The provinces have a combined population of more than 23 million.

"All efforts have been made, with more personnel on the ground to battle the fires," Widodo said, "But the most important measure is prevention before fires occur."

Widodo regretted that local authorities have been slow in detecting and responding to fires before they start to grow.

"We have all the resources, but all of them were not activated properly," he said.

He urged people to refrain from setting fires on peatlands or in forests that could trigger wildfires, and ordered authorities take firm action against arsonists, both company employees and villagers.

The Borneo Orangutan Survival Foundation said Tuesday that the haze was affecting hundreds of great apes in its care at rescue centres and wildlife re-introduction shelters.

"The thick smoke does not only endanger the health of our staff... but also it affects the 355 orangutans we currently care for," the foundation said in a statement, referring to just once center in Kalimantan.

"As many as 37 young orangutans are suspected to have contracted a mild respiratory infection," it added.

Conditions were so bad at their Samboja Lestari facility in East Kalimantan that outdoor activities for the animals had been restricted to a few hours a day.

Orangutans have been particularly vulnerable to commercial land clearances and have seen their natural habitat shrink dramatically in the last few decades.

The population of orangutan in Borneo has plummeted from about 288,500 in 1973 to about 100,000 today, according to the International Union for Conservation of Nature.

The toxic smoke caused by the forest fires is an annual problem for Indonesia and its neighbors, but has been worsened this year by particularly dry weather.

On Borneo island, which Indonesia shares with Malaysia and Brunei, pollution levels were "hazardous," according to environment ministry data.

Hundreds of schools across Indonesia and Malaysia were shut.

She said authorities have sealed off at least 49 companies in the past week for investigation, including a Singaporean-based company and four firms affiliated with a Malaysian palm oil corporate group.

Police have arrested 185 people suspected of starting forest fires. They could be prosecuted under an environmental protection law that allows up to 10 years in prison for setting fires to clear land, national police spokesman Dedi Prasetyo said.

Many areas of Indonesia are prone to rapid burning because of the draining of swampy peatland forests for pulp wood and palm oil plantations.

The Indonesian Disaster Mitigation Agency detected 2,153 hotspots across the country on Monday, more than half of which were in the six provinces of Riau, Jambi, South Sumatra, West Kalimantan, South Kalimantan and Central Kalimantan. The provinces have a combined population of more than 23 million.

It said 99% of the hotspots were caused by deliberately set fires.

Indonesia declared a moratorium on new development of peatlands after particularly disastrous dry season fires in 2015 which burned 2.6 million hectares (10,000 square miles) of land and spread haze across Indonesia, Singapore, southern Thailand and Malaysia. The World Bank estimated the fires cost Indonesia $16 billion, and a Harvard and Columbia study estimated the haze hastened 100,000 deaths in the region.