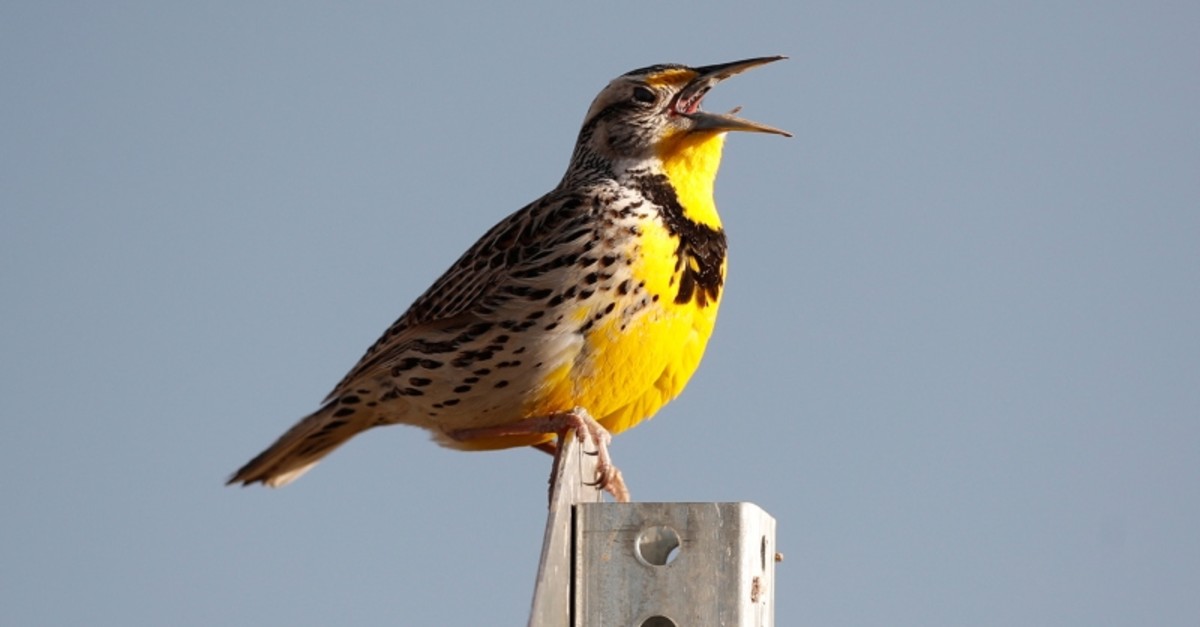 This April 14, 2019 file photo shows a western meadowlark in the Rocky Mountain Arsenal National Wildlife Refuge in Commerce City, Colo. (AP Photo)
by Sep 19, 2019 9:16 pm
From grasslands to seashores to forests and backyards, birds are disappearing at an alarming rate in the United States and Canada, with a 29% population drop since 1970 and a net loss of about 2.9 billion birds, scientists said Thursday.

People are to blame, the researchers said, citing factors including widespread habitat loss and degradation, broad use of agricultural chemicals that eradicate insects vital to the diet of many birds, and even outdoor hunting by pet cats.

"Birds are in crisis," said Peter Marra, director of the Georgetown Environment Initiative at Georgetown University and a co-author of the study published in the journal Science.

"The take-home message is that our findings add to mounting evidence with other recent studies showing massive declines in insects, amphibians and other taxa, signaling a widespread ecological crisis," Marra added. "Birds are the quintessential indicators of environmental health, the canaries in the coal mine, and they're telling us it's urgent to take action to ensure our planet can continue to sustain wildlife and people."

Most of the losses were not among rare species, but common ones across nearly every bird family and all habitats. They included sparrows, swallows, blackbirds, thrushes, finches, warblers and meadowlarks.

Some 90% of the total loss came from just 12 bird families and 19 widespread bird species such as the dark-eyed junco, common grackle and house sparrows. Each of those species lost more than 50 million individuals.

The researchers tracked populations of 529 species using decades of bird counts taken on the ground as well as weather radar data that revealed similar declines in the volume of migratory birds.

Grassland birds were particularly hard hit, with a 53% reduction in population, amid agricultural intensification.

Shorebirds, reliant on sensitive coastal habitats, sustained a 37% drop. Most shorebirds are migratory and experienced habitat degradation and destruction in many locales where they migrate. In addition, many shorebirds breed in Arctic regions rapidly warming due to climate change.

The researchers documented a steep decline for migratory birds. They noted broad declines among birds that migrate to the tropics, where there have been devastating rates of habitat loss and degradation. Migrating birds also face threats at their stopover sites and on their North American breeding grounds.

The researchers said other studies have documented worrisome bird population losses in other parts of the world.

"Birds are a critical component of many ecosystems. They serve as predators and prey in food webs, disperse seeds, and provide ecosystem services such as eating insect pests. When we lose large amounts of birds, we disturb the entire web of life, which we all depend upon," said study lead author Ken Rosenberg, an applied conservation scientist at the Cornell Lab of Ornithology and the American Bird Conservancy.

While climate change was not the major driver of the population plunge, it is likely to exacerbate the existing threats to bird populations, Rosenberg said.

The researchers said the extinction in the early 20th century of the passenger pigeon, once likely the most abundant birds on Earth numbering in the billions, showed that even abundant species can go extinct rapidly.

Some types of birds showed gains. Banning the pesticide DDT allowed for the resurgence of raptor populations including the bald eagle, the researchers said. Waterfowl management policies including wetland protection and restoration enabled ducks and geese to thrive, they added.

"These are important examples that show, when we choose to make changes and actively manage the threats birds face, we can positively impact bird populations," Rosenberg said.