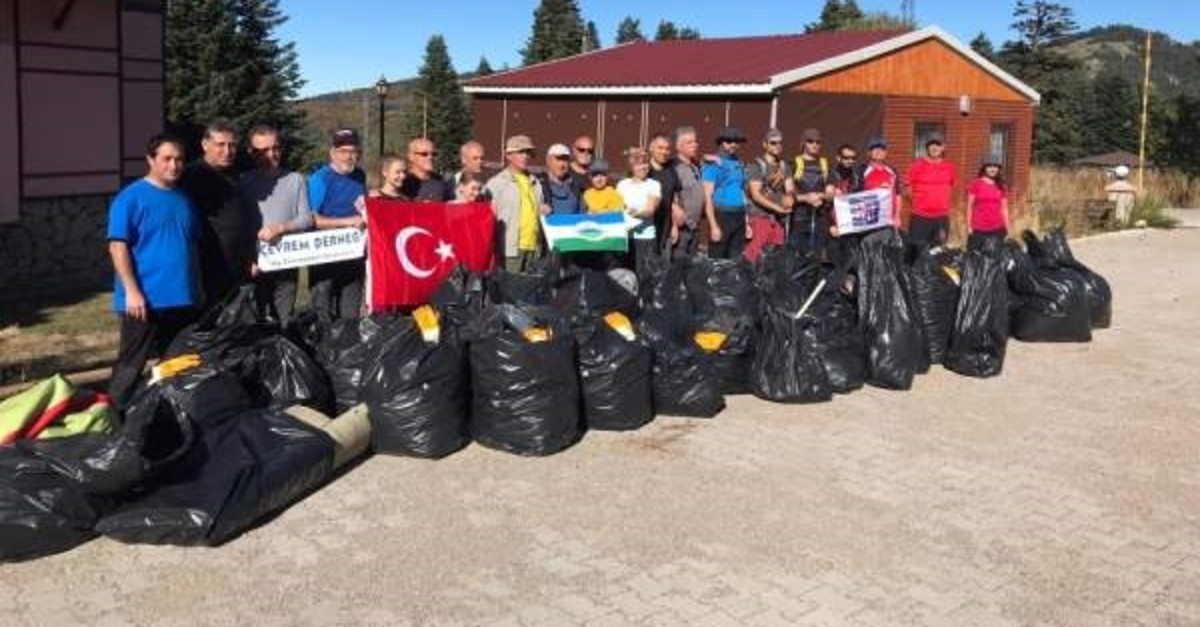 Mountaineers in Bursa pose after cleaning up rubbish in the foothills of Mount Uludau011f. (u0130HA)
by Daily Sabah with IHA Oct 15, 2019 4:35 pm
After 11 tons of rubbish were collected on Mount Everest, world’s highest mountain, it has become clearer that world’s summits are dirtier than you think.
Believing that mountains and their foothills needs extra care, Turkey’s mountaineering clubs got together and organized a volunteer cleaning project on Mount Uludağ in Turkey’s Bursa province. Initiated by Niğde-based mountaineer Yusuf Dağcı, the cleaning project has grown as amateur and professional mountaineers. With his initiative, mountaineers around Turkey began organizing various local events, climbing Anatolia’s summits as they clean up the rubbish on their way.
As a part of the project a total of 24 volunteers from various local nongovernmental organizations (NGOs) in Bursa got together to organize a cleanup event on Mount Uludağ, one of the most-visited ski resorts in the country. The volunteers collected the garbage left by visitors and picnic makers.
Speaking to the press on behalf of the volunteers, Korkut Güven said Uludağ is the next step of the cleaning project which has so far taken place in 25 different provinces around Turkey. “We have crossed out Bursa from the list. We have done our work but the visitors and the picnic makers has to be more careful about their garbage. We need to keep Mount Uludağ clean for future generations,” Korkut added.
The garbage problem in the mountains has made headlines with the extensive cleanup project that took place on Mount Everest. The task is being carried out by a 14-member team, assigned by Nepalese government, has collected 11 tons of garbage in less than two months.
Last Update: Dec 20, 2019 1:04 am
RELATED TOPICS