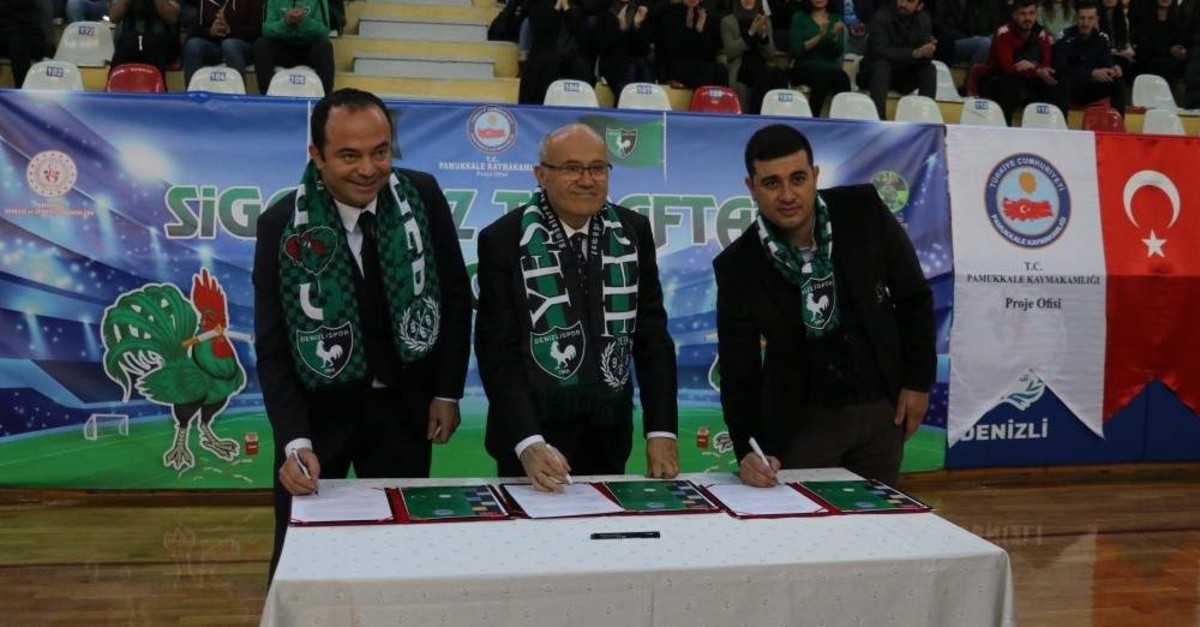 A football fan group in Turkey hopes to lead the way in an inspiring anti-tobacco drive which they recently inked into reality with a mass contract to quit smoking.

The Yeşil Cephe Taraftarlar Derneği (Green Front Fans Association) joined forces with the Governorship of Pamukkale and the District Directorate of Youth and Sports to pledge that all the fans of Denizlispor would quit smoking, eventually, with a majority hoping to have quit by May 2020.

The signing ceremony of the protocol was held on Saturday, Dec. 7, at the Hasan Güngör Sports Complex.

Turkish fans of the club said they wanted to set an example to others with their initiative.

Stating that the green-blacks were quick to answer their call to cooperate on such a cause, Pamukkale Gov. Hayrettin Balcıoğlu said: “Surveys showed that 50% of our fan base was smokers. 80% of that group expressed intent that they would quit smoking through their own willpower.”

“We believe that most of our fans will have quit by May 31 World No Tobacco Day. We will also hold similar meetings with other fan groups," Balcıoğlu said, adding that the Provincial Health Directorate and smoking cessation and rehabilitation centers in the district have been working hard to help realize this goal.

The governor said that smoking fans would be provided with psychological support as well as one-on-one sessions with therapists.

The fan association currently has 2,500 members. Balcıoğlu said they expected a 80-90% success rate with the project, and believed Denizlispor fans would play a crucial role in getting the rest of the football community and Turkey to join their drive.

Stating that he saw cigarettes as “the mother of all evil,” the fan association’s president Zeki Turan said he hoped the youth of Pamukkale would soon overcome this bad addiction and lead a better life after becoming non-smokers.

The signatories of the protocol took symbolic penalty shots into the goal with a banner that read "En güzel gol sigaraya son" (The best kick is to quit that cig) draped between the goalposts, while fans in the stands threw their cigarette packs into it as well.

The signing ceremony ended with a symbolic gift – a green piggy bank – given to three fans who quit smoking thanks to the initiative.

The contract complements previous initiatives by the Pamukkale District Governorate to make Denizli and the district smoke-free, as well as President Recep Tayyip Erdoğan’s many projects to create a smoke-free Turkey. Such efforts began in 2009 when a landmark nationwide indoor smoking ban was introduced. With the ban, smoking at restaurants, bars and similar establishments as well as school grounds was outlawed. Since then the sales of tobacco products at educational facilities have also been banned, and clinics that provide treatment against the habit have been set up all across the country, providing service free of charge. Most recently, a ban on smoking in vehicles also entered into force.