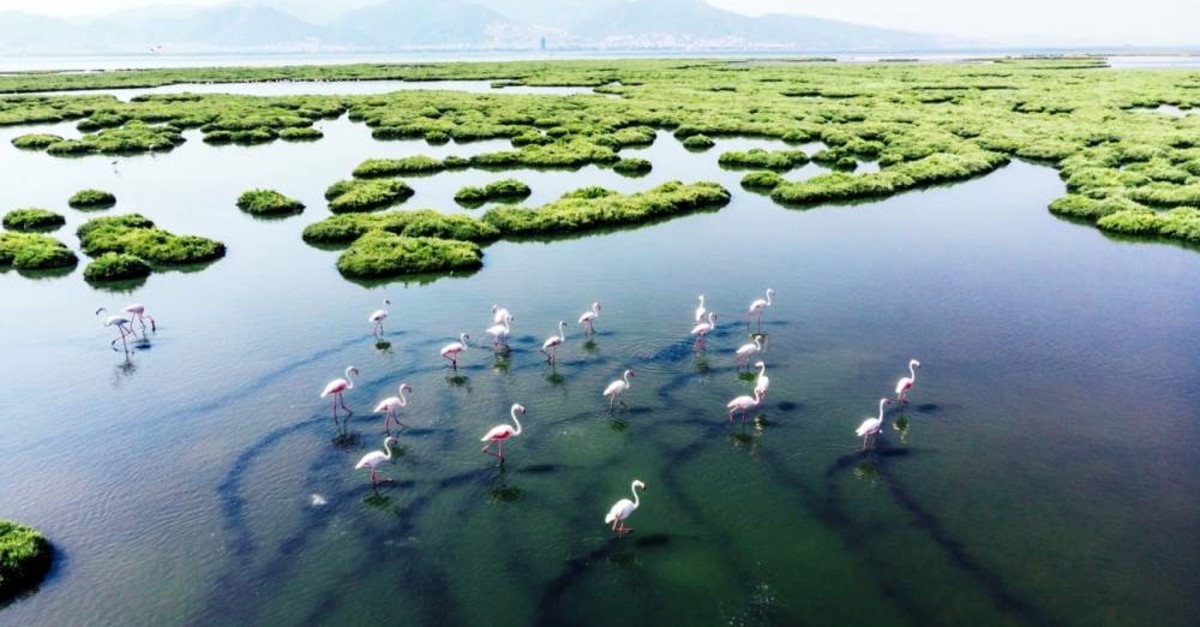 The wetlands of Tuzla and Gediz in western Turkey, for example, are one of the most important habitats for migratory birds, especially flamingos. (iStock Photo)
by Compiled from Wire Services Feb 16, 2020 5:02 pm

Our planet's wetlands are some of the most biologically diverse ecosystems on the planet, harboring countless rare and endangered species – perhaps even more so than the Amazon rain forest and coral reefs put together.

According to at least one expert, wetlands make up the most fertile ecosystems of the Earth, offering a range of biodiversity as rich as the Amazon rainforest in scope.

Mehmet Gökoğlu, an expert on water resources at Antalya's Akdeniz University, says: "Wetlands are more productive than other aquatic environments, as they represent an interconnected, tightly balanced mix of terrestrial and aquatic ecosystems."

Wetlands are areas of marsh, fen, peatland and water, whether natural or artificial, permanent or temporary, which harbor either static or flowing waters – fresh, brackish or salt – including areas of the coast whose depths at low tide do not exceed six meters, according to the Convention on Wetlands. The agreement, signed in Ramsar, Iran on Feb. 2, 1971, an international treaty overseeing the conservation and sustainable use of wetlands.

Gökoğlu said the areas' biodiversity increases the quality of the environment.

On Feb. 2, the scientific community held events to boost awareness of the Convention on Wetlands and the important role the wetlands play. The Convention's theme this year centers on "Wetlands and Biodiversity."

According to the World Wetlands Day website, this is a unique opportunity to highlight the biodiversity of the wetlands, their status, why they matter and how actions can be made to reverse their loss.

"One of the most important functions of our wetlands is to protect the quality of our water. Pollutants and sediment are held at bay in wetlands. Due to their location between water and land, they are very good water filters. They help filter out wastes, nutrients and sediment that seep into the flow from the land," said Gökoğlu. He went on to say that wetlands also played a key role in preventing erosion as the roots of plants in wetlands hold soil and slow down wave motion as well as flow rate, preventing coastal erosion. "Since wetlands slow down the flow rate, they act as temporary storage and due to their slow-release properties, function by protecting those living in lower basins from flood peaks and flood damages," he explained, referring to these ecosystems as something like a flood barrier.

Gökoğlu also added that as wetlands perform a perfect function in the cycle of nitrogen, sulfur, methane and carbon dioxide and are reservoirs that accumulate and collect significant amounts of carbon in organic soils and peat, wetlands have an effect on local microclimates. "Many bird species use wetlands both as a resting and sheltering area during their migration and use them to shelter from predators. Most wetlands serve as an environment for spawning, sheltering and hunting fish."

"Many animals, whether land or water-based, use the areas for breeding. Among these are numerous mammals and endangered species," Gökoğlu said, touching on how essential these habitats are for the survival of countless species.

However, many of these environments are under threat. Although these fertile areas have been severely affected by factors such as climate change, according to Gökoğlu, their primary danger comes from human activity.

"Most wetlands have had their marshes drained, either due to land acquisitions or for the prevention of flies. Most wetlands are also at risk of being burned in forest blazes. In other parts of the world, wetlands have been turned into landfills and see a harmful amount of toxic waste," he explained, adding that such occurrences represented a risk to the entire ecosystem.

Gökoğlu said that urbanization represented a further risk to wetlands, with reeds and meadows destroyed by land vehicles. Meanwhile, wetlands in coastal areas have been destroyed due to the construction of hotels and summer homes. He added that hunting and erosion, caused by the degradation of terrestrial areas near wetlands had also affected the ecosystems.

In order to fight against this alarming deterioration of the planet's wetlands, Gökoğlu concluded that the Ramsar Convention represented a mechanism that "must be adhered to fully," adding: "There should be no drainage or construction activity, areas should be closed to all kind of hunting and there should be no alterations to the surrounding areas." The professor also added that these areas should be protected from fire risks, as wetlands are vulnerable to this danger as much as they are for pollution.

According to the Ramsar Convention, an organization formed around a 1971 treaty to protect wetlands, almost 90% of the world's wetlands disappeared over the past three centuries. The loss rate has accelerated since the 1970s, with wetlands now disappearing three times faster than the world's forests, the group says.

Every type of naturally occurring wetland has suffered — from ponds, freshwater swamps and coastal marshes, to fens, bogs and other peatlands.

The consequences can be profound:

— Roughly 5,000 wetland-dependent species are threatened with extinction, including mammals, birds and amphibians, according to Ramsar.

— Fewer natural storage areas to hold back torrential rains mean more severe floods in many parts of the world, including the U.S. heartland, which was seen this summer.

— Draining wetlands, such as in Indonesia to make way for palm oil plantations, can release huge amounts of the greenhouse gas carbon dioxide, a major contributor to climate change.

Wetlands in northern China, the central U.S., northern Africa, India and the Middle East already have been depleted by the pumping of underground aquifers for agriculture.