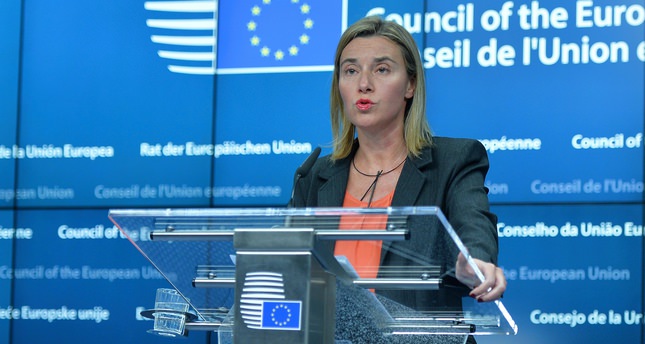 by Anadolu Agency Jan 20, 2015 12:00 am
It was announced Monday that EU leaders have agreed to share intelligence not only with member states, but also with other countries, including Turkey, Egypt and Gulf states in order to combat terrorism.

The decision was made during an EU foreign ministers' meeting in Brussels where they discussed ways to combat terrorism in Europe and other parts of the world. The meeting came in the aftermath of the deadly attack on the French satirical magazine Charlie Hebdo and anti-terrorism raids in Belgium.

After the meeting, High Representative of the EU for Foreign Affairs and Security Policy Federica Mogherini told reporters about measures to curb terrorism: "We are looking to launch specific projects in the coming weeks with certain countries to increase the level of cooperation on counter-terrorism, and I would name Turkey, Egypt, Yemen, Algeria and the Gulf countries.''

In the past weeks, Turkish Prime Minister Ahmet Davutoğlu said that Turkey takes great effort to protect its 911-kilometer-long border with Syria. "We support every kind of intelligence not to accept foreign fighters" he said, adding that Turkey hosts 35 million tourists every year and only prohibits entry to individuals when it receives intelligence from the relevant country that they should not be admitted into the country. He explained that Turkey has deported 1,500-2,000 people and put restrictions on a further 7,000 people from entering the country in order to prevent terrorism. Coming under criticism by some international media outlets not extending enough help in intelligence cooperation against terrorism, Turkey in diplomatic talks with EU leaders stressed that Turkey is ready to share intelligence in the face of terrorism.

Regarding the Charlie Hebdo attack, Foreign Minister Mevlüt Çavuşoğlu said when it was revealed that a Paris attacker Hayat Boumeddienne, the partner of a Paris terror suspect who took people hostage in a kosher supermarket and killed four people, passed into Syria through Turkey, they had shared intelligence with France on Boumeddienne, but to the dismay of Turkish authorities, no action was taken by France.

''Turkey is central in so many ways and can play a constructive role if they use their position and setting in the right way,'' Wallstrom added.

EU leaders also decided to call on the European Parliament to work on the implementation of the Passenger Name Record system, which would require EU member states to share information about airline passengers with other countries.

Currently, up to 16 EU countries use the record system without an EU framework.

The legislation was proposed by European regulators in 2011, but was later rejected by the European Parliament's Civil Liberties Committee in April 2013. Critics argue that the record system interferes with the right to privacy and protection of personal data.

Mogherini said another strategy for developing cooperation on security issues would be to improve communication with the Arab-speaking population in the EU and other parts of the world.

''We need to improve our capacity to read Arabic, speak Arabic and listen to messages coming from the Arab world,'' Mogherini said, ''This is a basic communication strategy we need to implement.''

Her comments came after calling for a stronger alliance with Arab countries amid deadly terror attacks and arrests across Europe. Mogherini also met Arab League Secretary-General Nabil el-Araby on Monday.

''The threat is not only the one we faced in Paris, but spreading in other parts of the world starting from Muslim countries,'' Mogherini said, ''We need to strengthen our way of cooperating, first of all, with Arab countries.''

Mogherini said an alliance between Europe and Arab countries was needed because Muslims were mostly affected by terrorist attacks.
She said: ''I've always said it is not an issue between Europe or the West and Islam."

"Terrorism and terrorist attacks are mostly targeting Muslims in the world, so we need an alliance, we need a dialogue there to face the issue together.''

''What we need to do is face terrorism while respecting Islam," she added.

The U.K. Secretary of State for Foreign and Commonwealth Affairs Philip Hammond told reporters ahead of the meeting: ''We have very good cooperation with our partners across the Arab world in counter-terrorism."

"The Muslim countries of the world are the ones who have suffered the greatest burden of terrorism. They will continue to be in the front line and we have to work closely with them to protect both those countries and European Union countries," Hammond added.