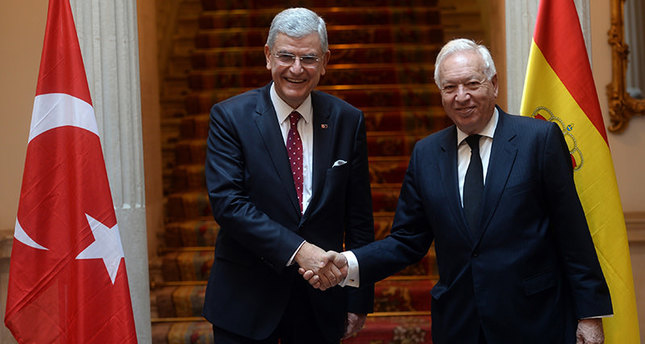 by Anadolu Agency Jan 28, 2015 12:00 am
Turkey will be ready to become a full member of the EU in two years time, the country's EU minister said Wednesday.

Negotiations, however, hit a stalemate in 2007 because of Turkey's position on the Cyprus issue and opposition to its full EU membership by the German and French governments.

To gain membership, Turkey must also successfully conclude negotiations with the EU in 35 policy chapters, which involve reforms and the adoption of European standards.

"Turkey will have all the chapters closed in two years time," Volkan Bozkir told Anadolu Agency during his official visit to Spain's capital, Madrid.


Bozkir added that Turkey's aim is to reach EU's standards.

Saying that Turkey is economically in a much better situation compared with many other EU countries, Bozkir added, "The EU does not have the luxury not to enroll Turkey."

The minister also said today's realities made it impossible for the EU to act as a Christian association and added that the union needs Turkey.


Touching on the Paris attacks, Bozkir said Turkey plays an important role in fighting against terrorism.

On Jan. 7, at least 12 people were killed in Paris when two masked gunmen, Said and Cherif Kouachi, opened fire on the staff of French satirical magazine Charlie Hebdo. The weekly was known for printing controversial material, including cartoons of the Prophet in 2006 and 2012.

"There cannot be a European collective security system without Turkey," said Bozkir.

He added Europe cannot overcome this problem without intelligence sharing and cooperation with Turkey.