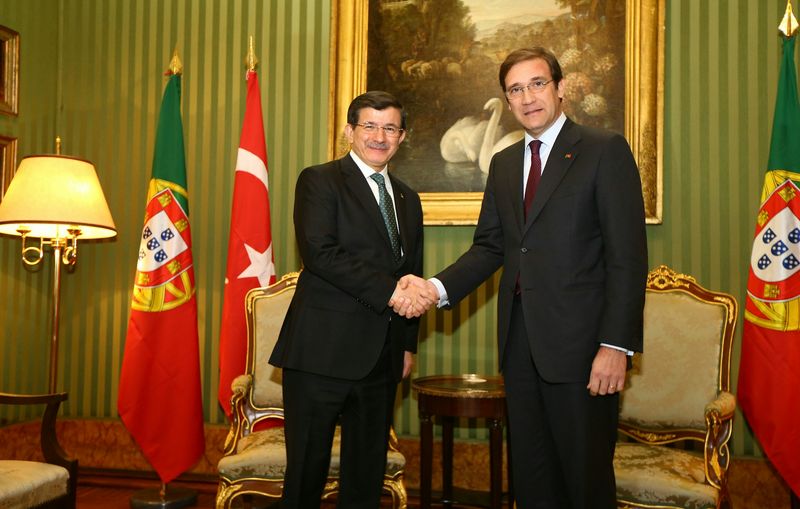 by Anadolu Agency
Mar 04, 2015 12:00 am
Portuguese Prime Minister Passos Coelho stressed on Tuesday the need to enable Turkey's accession to the European Union.

"Turkey must no longer be a country that has a symbolic say in the EU family photos, but assume a position actually in our family," he said in a joint press conference with his Turkish counterpart Ahmet Davutoğlu at the Foreign Ministry Office in the Portuguese capital Lisbon.

His remarks came following the first meeting of Turkey-Portugal Intergovernmental Summit, established when Coelho visited Turkey back in December 2012.

Davutoğlu thanked Coelho for his support of Turkey's EU membership bid, saying "this is the strong and clear voice Turkey needs in the EU."

"We hope the accession talks Turkey is having with the EU will not be limited to a commercial deal and that Turkey will have its own status in the EU," he said.

Davutoğlu said that Turkey's will for membership remained intact.

To gain membership, Turkey must successfully conclude negotiations with the EU in 35 policy chapters, which involve reforms and the adoption of European standards.

"Turkey will pursue its reforms as if all chapters have opened," he said.

Coelho also praised Turkey's efforts regarding the blocking of foreign fighters who aim to go to Syria to join Daesh.

As for bilateral relations, Davutoğlu voiced his belief that the two countries could increase the current $1.3 billion bilateral trade volume in 2014 to $5 billion in a short period of time.

He announced that Turkish Airlines would fly to Lisbon twice a day and that there would be flights to Porto seven days of the week. He did not go into details on when this would actually occur.

Following his visit in Lisbon, Davutoğlu will proceed to New York for meetings with international financial circles and leading investors and economists of the U.S between March 4 and 7.

He will meet UN Secretary-General Ban Ki-moon to talk over recent regional and international developments ranging from the Cyprus issue, the Syrian civil war, Iraq, ISIS threat and the Ukraine crisis.

The two are also expected to discuss the projects that have been jointly conducted by the UN and Turkey, including the World Humanitarian Summit that will be hosted by Istanbul in 2016.

The Turkish premier will also make an address on Friday during a high-level thematic debate on Advancing Gender Equality and Empowerment of Women at the UN upon the invitation of Sam Kutesa, the president of the UN General Assembly.