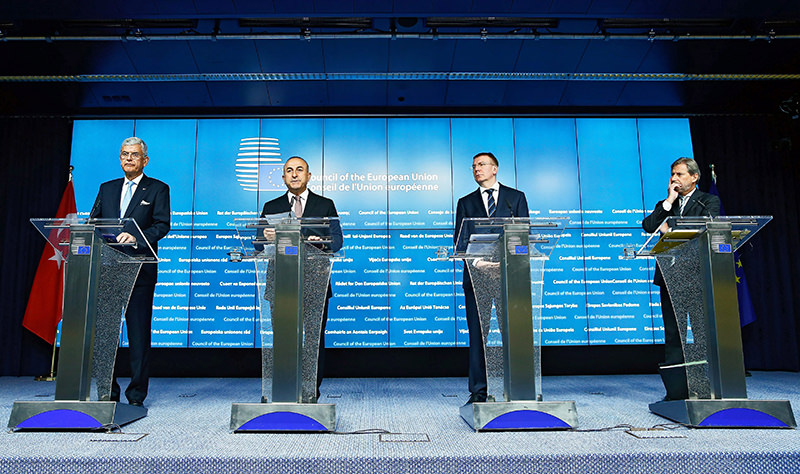 Following the resumption of reunification talks on Cyprus, the EU enlargement commissioner, Johannes Hahn, met with Turkey’s European affairs minister and the foreign minister in Brussels where he said the EU could open the economy related Chapter 17 ‘very soon’ to accelerate the accession process

Turkey's bid for EU membership could move forward "very soon," EU commissioner for European neighborhood policy and enlargement negotiations, Johannes Hahn, said at a joint press conference with Foreign Minister Mevlüt Çavuşoğlu and Minister of EU Affairs and Chief Negotiator Volkan Bozkır in Brussels yesterday. Hahn said Chapter 17, which addresses economic and monetary policy, could be opened very soon. "We have concluded our internal work and we will submit our report to the council, at the latest, in early June, and [I] hope we will get approval soon so we can start and open this chapter," Hahn said at the news conference. Out of 35 policy areas, 14 have been opened and 17 remain blocked, including those on economic and monetary policy and education and culture. "I would like to stress Turkey does and will do its part in [the] accession process. However, the pace of negotiations is not promising because some countries have raised obstacles," Bozkır said at the press conference. "We expect this chapter [Chapter 17] to be opened as soon as possible. We are ready to intensify dialogue for deepening Turkey [and EU] relations," Bozkır said.

"We expect this chapter [Chapter 17] to be opened as soon as possible. We are ready to intensify dialogue for deepening Turkey [and EU] relations," Minister of EU Affairs Volkan Bozkır said.

Prior to the EU-Turkey Association Council meeting on Monday, a joint statement signed by Hahn, Çavuşoğlu, Bozkır and High Represent of EU Foreign Affairs and Security Policy Federica Mogherini said: "Turkey and the EU are key partners and strategic allies in our region. Accession negotiations remain the cornerstone of EU-Turkey relations."

The statement, released after a working dinner in Brussels on Sunday, added that specific discussions took place on how to further progress toward opening Chapter 17.

It was also revealed on Sunday that Turkey is to receive 18 million euros ($20.5 million) from the EU to support the country as it shelters almost 2 million refugees from Syria. Sunday's meeting also saw Turkey and the EU work on enhancing cooperation to prevent illegal migration in addition to reinforcing the capacity of the EU delegation in Ankara to work closely with Turkey on the issue.

Turkey applied for EU membership in 1987 and accession talks began in 2005. However, negotiations hit a stalemate in 2007 because of Turkey's position on the Cyprus issue and German and French opposition at the time. To gain membership, Turkey must successfully conclude negotiations with the EU in 35 policy areas, or chapters, which include reforms and the adoption of European standards. So far 14 chapters have been opened while 17 remain blocked and another four have yet to be discussed.

Çavuşoğlu signaled earlier this month that Turkey would press ahead with its bid to join the EU. "With its geostrategic position, strong economy and effective foreign policy, Turkey can make a significant contribution to the EU on its way to being a global actor. That is why our accession process was started and continued in line with the decisions made unanimously by the EU," Çavuşoğlu said.

"In this framework, political blockades by some member states in our negotiation process should be removed," Çavuşoğlu said.
Turkey, which must implement reforms to comply with EU standards, has complained that its path to membership is being unfairly blocked and public enthusiasm has weakened as the accession process has dragged on.

The EU also welcomed the resumption of settlement talks on Cyprus last Friday and agreed to continue to give "full, resolute and practical support to the efforts of U.N. Secretary-General [Ban-ki Moon's] Special Adviser on Cyprus Espen Barth Eide to make real progress on this essential matter in the coming weeks and months."

Earlier this month, Bozkır said that Turkey's EU membership bid has been at a standstill because of the Cyprus issue. "If we had a mentality of sacrificing Turkish Cypriots, we would now probably have become an EU member," he said.

The island was divided into a Turkish Cypriot administration in the northern third and a Greek Cypriot government in the southern two-thirds after a 1974 military coup by Greece was followed by a Turkish intervention as a guarantor state of Cyprus.