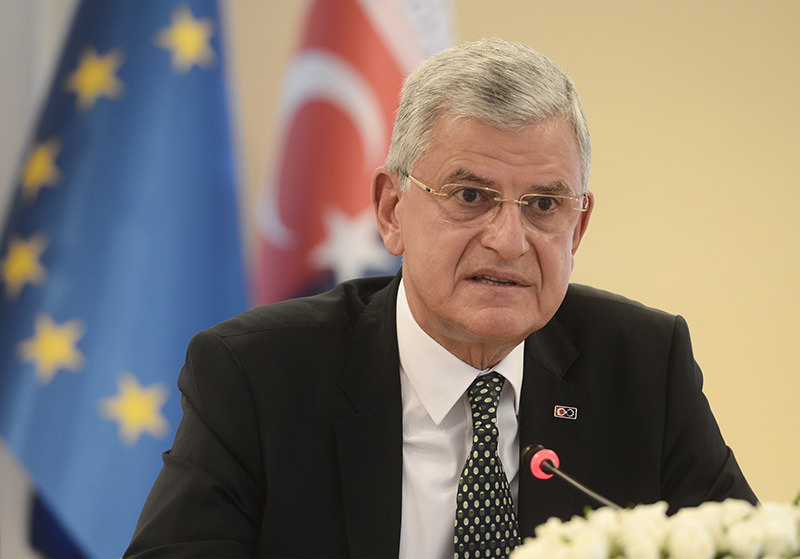 Minister of EU Affairs and Chief Negotiator Volkan Bozku0131r speaking at a press conference on June 10, 2015 (AA Photo)
by Ali Ünal Jun 10, 2015 12:00 am
The European Parliament (EP) has approved Turkey's 2014 progress report for EU membership by 432 votes to 94, with 127 abstentions at a plenary session in Strasbourg on Wednesday.

The report emphasizes Turkey's efforts in achieving a comprehensive and sustainable solution in the Kurdish reconciliation process and praises Turkey for providing humanitarian aid to refugees from Iraq and Syria and granting them legal status by giving identity cards. The progress report also calls on the EU to give active support to Turkey for dealing with this issue.

Speaking after her report was approved by the EP, the rapporteur Kati Piri said that this report clearly calls for more, not less, engagement with Turkey at all levels. Touching upon the general election results, rapporteur Piri also said that Turkish voters have indicated that they want change and the EP's reaction should not be to shut the door to Turkey. In a resolution of the report, the EP says that the elections demonstrated the "resilience of Turkish democracy and the democratic spirit of its citizens," and welcomes "the most inclusive and representative parliament in Turkish modern history, reflecting the country's diversity." It calls on all political parties to work towards the establishment of a stable and inclusive government, which should reinvigorate the democratization process in Turkey and its reform dialogue with the EU.

The EP calls on Turkey to put its reform process at the center of domestic policy choices and commit "unequivocally" to democratic rules and principles, which lie at the heart of the EU, and urges Turkey to respect media freedom, free expression and judicial independence in a resolution on the progress of reform in Turkey in 2014.

The report criticizes the government regarding media freedom and suggests the government guarantees media freedom "as a matter of priority," while asserting that its action against freedom of the press and plurality of opinion is incompatible with EU fundamental rights and "conflicts with the spirit of the negotiations process." The report also stresses that Turkey must show more political will to create a proper legal framework for the fight against corruption.

The EP suggests that the European Commission review the conduct of the EU accession negotiations with Turkey and consider how EU-Turkey relations could be improved and intensified. In a resolution of the report, the EP also asks the Commission to support the Turkish government's efforts to conclude the peace process with the Kurdish community.

The EP also calls for a step up on EU-Turkey foreign policy cooperation and counter-terrorism dialogue, and suggests that it must use all its resources to fight terrorist groups such as the so-called Islamic State of Iraq and the Levant (ISIL).

Regarding the Cyprus issue, the EP calls Turkey to begin to withdraw its troops and transfer the Famagusta area to the U.N. The EP report also calls on Greek Cypriots to open the port of Famagusta under EU customs supervision and to allow Turkish Cypriots to trade with the EU in a legal manner.

After the approval of the report, Turkey's EU Minister and Chief Negotiator Volkan Bozkır stated that they will dismiss the report and will send it back to the EP. Speaking at the press conference in Ankara on Wednesday EU Minister Volkan Bozkır said that the amendments to the report made it unbalanced and biased. ''The EP proved it has no broad vision. It does not help to bring Turkey and the EU closer. Fortunately the EP doesn't speak on behalf of the EU. The EP's report on Turkey does not reflect the real situation in Turkey-EU relations. This report has thus become unacceptable for Turkey and once officially received will be returned,'' he added.

Voting procedures for the report, which were expected to be conducted last month, were postponed by rapporteur Piri due to the great number of proposals for changes.
Last Update: Jun 10, 2015 5:44 pm
RELATED TOPICS