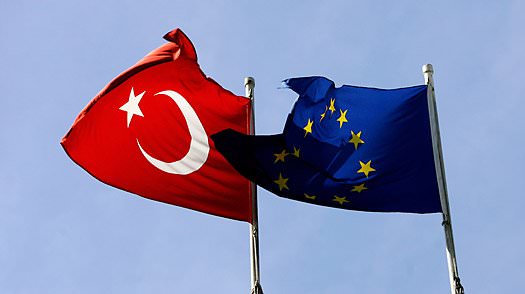 by Daily Sabah Oct 21, 2015 12:00 am
Turkey's integration as a full member of the European Union may be Europe's 'last hope' to preserve its global domination, according to a European legal expert, who claims that Turkey has become a functioning democracy under AK Party rule, which provides solutions to the ongoing regional crises, serves as a 'bridge' between the east and the west and has a geostrategic position.

According to Ariti-Marina Alamanou's article on New Europe, Turkey's integration into Europe has become a necessity for Europe to revive its global and regional power. Alamanou claimed Turkey has dramatically transformed in the past 12 years as she outlined seven reasons why Europe should trust President Recep Tayyip Erdoğan.

Europe has historically opposed Turkey's accession, but should adopt a different approach for the future, as Alamanou said "the migration crisis and the geopolitical threats and challenges surrounding Europe, have redefined the dynamics of a relationship that is fundamentally linked to the ability of Europe to exercise an influential global role."

Turkey was a semi-democracy controlled by generals before Erdoğan, and civil society was suppressed, but the AK Party under then-Prime Minister Erdoğan's leadership has created a new democracy compatible with European standards and has significantly improved the country's economy, which is expected to grow by 3 percent in 2016.

Another reason for why Turkey is Europe's last chance is related to the Syrian Crisis, and how Turkey can provide a sustainable solution to the conflict, Alamanou explained.

"Europe needs a sustainable solution to the Syrian civil war, and the moderate opposition is the only political force in Syria which in the future can bridge what for now seems unbridgeable" said Alamanou, and underscored that Turkey has consistently emphasized how the Assad regime cannot be part of the solution, as she claimed it is one of the main causes of the conflict.

In addition, the piece also states that Europe needs to comprehend the importance of Turkey's strategic position and cooperation as it is the only actor that can provide a solution to the migration crisis, which is posing a challenge to Europe.

Turkey's geopolitical position may also be the answer to European interests regarding Russian expansionism, which Alamanou claimed poses a potential threat to European and Atlantic agendas. She noted that 'European Turkey' was and still is the strongest obstacle to 'Russian geopolitical unilateralism' and added that Turkey's geographic location may improve Europe's global role as it is situated between the critical trade and energy routes between the West and the East.

Turkey may serve as the 'cultural bridge' between the East and the West and is Europe's key ally for fighting radicalization, with its secular and democratic administration and Muslim population, as Alamanou claimed Europe will never be safe if Muslim populations continue to 'hate what Europe stands for.'

In addition, Turkey's EU accession will bring more political stability and strengthen it against the 'slanderous campaign by the Gülen Movement' Alamanou said.

"Europe has to exchange fear and prejudice with bold realism so as to ensure the re-launch of the European project." Alamanou said, adding that President Erdoğan's vision of Turkey is not only a bridge between Europe and the east, but the future.