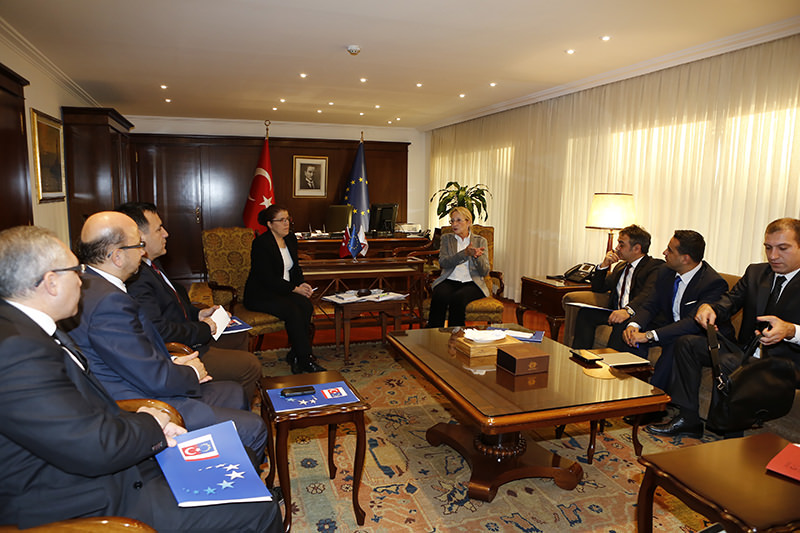 EU Minister Dedeoğlu said the EU should take Turkey's national security concerns into consideration and include the Gülen Movement, which is accused of serious crimes, including attempts to overthrow the government and military espionage activities, onto its list of terrorist organizations

EU Minister and Chief Negotiator Beril Dedeoğlu said the EU should understand Turkey's national security concerns about Gülenist and that she expects a common act from EU counties with Turkey against this threat and include the unlawful organization on the list of terrorist organizations.Responding to the European Commission's 2015 Turkey Progress Report to Ankara bureau chiefs of major news outlets Tuesday evening, Dedeoğlu said that although there is some unfair criticism the report declares the EU's intentions for Turkey's EU membership by opening new chapters and revitalizing relations. "With EU-Turkish relations a high self-confidence and strong determinations for EU reform process are maintained. Even though there is unfair criticism our duty is to learn our lessons and continue the reform process," she said.

This year's progress report, which originally was due for release in mid-October before the Nov. 1 elections, praises Turkey's efforts for Syrian refuges and encourages Turkey's further cooperation with the EU on the migration crisis. However, the report criticizes Turkey for "serious backsliding" on freedom of expression and the independence of the judiciary. Asserting that some of the criticism is not related to reality, Dedeoğlu said the way of presenting the criticism reveals that EU officials have insufficient information on some matters. "For instance, there is a part in this year's report that says a large number of judges and prosecutors are designated and this causes concern about [the independence of the] judiciary. We checked this figure and found out that in 2012-13 the number of designated judges and prosecutors was higher than this year, but this issue was not mentioned in previous progress reports," Dedeoğlu said.

Emphasizing that constructive criticism is necessary to understand the real picture in Turkey and they are open to it, Dedeoğlu said that prior to the release of the report some EU officials tried to make an indecent proposal by softening the tone of criticism in the report if Turkey accepted the EU's offer on the issue of refugees. Regarding the postponement of the report until after the Nov. 1 elections, Dedeoğlu said Turkey did not make the request. "We frankly said that the progress report could be published before than election and told EU officials that it will not affect the election results. We did not request the postponement, it was their decision," she said. She said she has the impression lobbies that work against Turkey heavily influenced EU officials and that Turkey is required to fill the gap in this area as soon as possible.

Regarding the Gülen Movement headed by retired fugitive cleric Fethullah Gülen, Dedeoğlu said whatever EU reports say about the organization, Turkey is determined to continue its fight against Gülenists, who are accused of infiltrating state institutions in Turkey and attempting to overthrow the government. Ankara views the movement as a threat to Turkey's national security. It has been referred to as the Gülenist Terror Organization (FETÖ) by a prosecutor in a recent indictment. Dedeoğlu said the EU should understand Turkey's national security concerns about Gülenists and that she expects a common act from EU countries by acting together with Turkey against this threat and putting this unlawful organization on a terror list. "Turkey has been struggling for many years for the recognition of the PKK as a terrorist organization.

In the beginning, EU countries said that they can designate the PKK as a terrorist organization as long as they do not have terrorist acts in their countries. Now they are having the same excuse for Gülenists and other terror organizations," she said. In response to a question about whether Turkey is expecting common action from the EU against Gülenists by cutting their finances and including them on a terror list Dedeoğlu said: "Yes, exactly."This year's progress report also says that President Recep Tayyip Erdoğan challenged some institutions, notably the judiciary and the central bank and that he made a number of statements against the media and other forms of expression. Dedeoğlu refuted the statement and said that it is unacceptable. "Unjustified criticism about Turkey's president by several EU rapporteurs really makes my blood boil," she said.

Concerning the criticism in the report about media freedoms, Dedeoğlu said it is easy to understand if you look at it from a European perspective, but added that what has been happening in Turkey in the last two years is more than a discussion about media freedoms, implying Gülenists, who have been defined as a national threat by Turkey's National Security Council.
Last Update: Nov 12, 2015 10:10 am